How will Egypt fare when the Fed starts to taper? 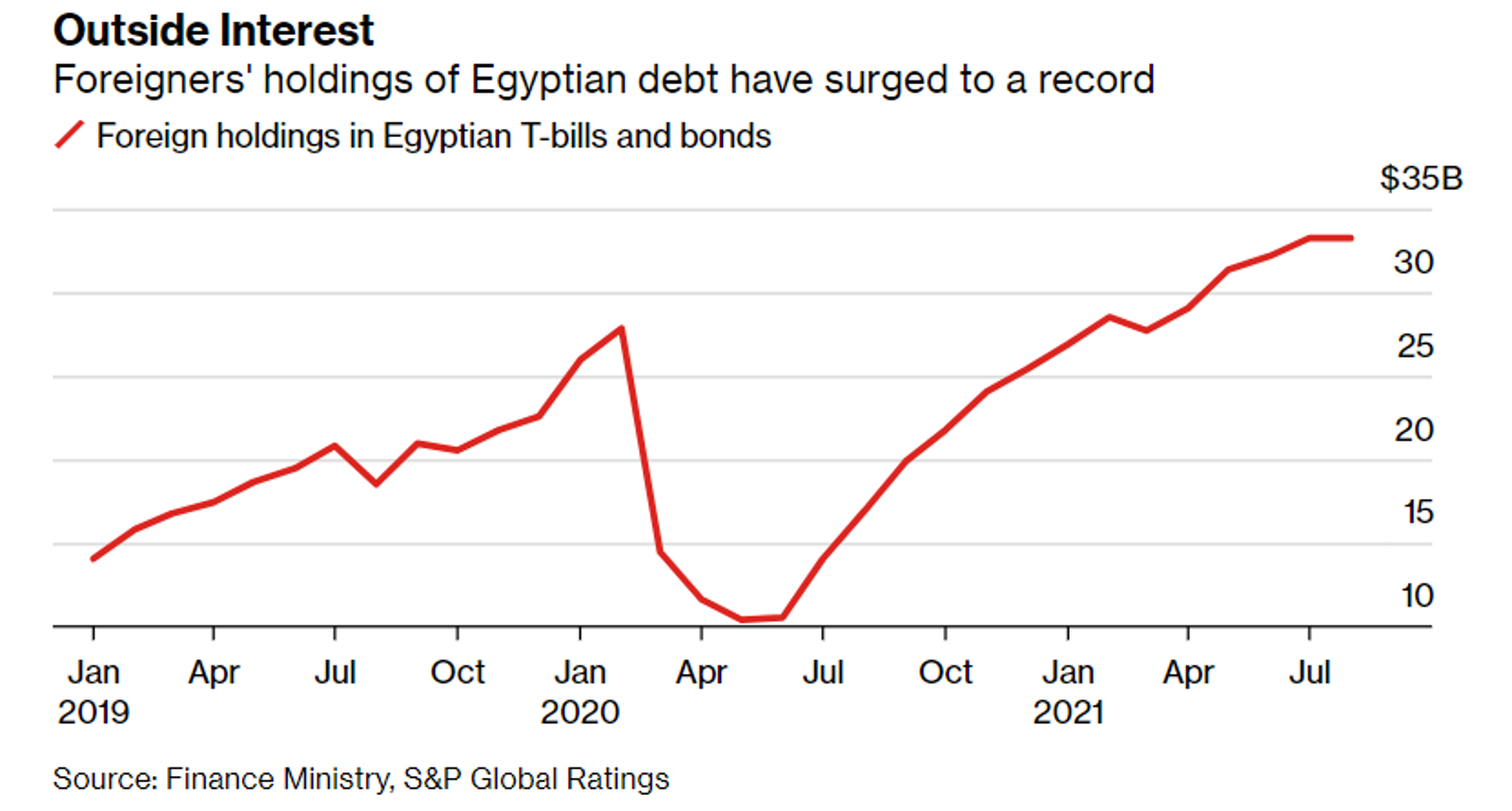 Egypt is among emerging markets that are bracing for the Fed taper: Emerging-market debt — including Egyptian bonds and T-bills — could become less attractive to foreign investors after the Federal Reserve last month hinted that it could start to wind down its asset-purchase program in November and raise interest rates as soon as next year. A tighter US policy could leave emerging markets vulnerable to a drop in foreign inflows as risk-averse managers seek safer returns in the US. That said, Egypt’s strong foreign reserves, fast-growing economy, and a switch to longer-term maturities in recent years mean Egypt is best-placed among EM to weather a potential storm. Bloomberg has a full, chart-based rundown of the strengths and pressure points to watch out for as Egypt’s fixed-income market transitions into the post-covid-recovery economy.

High real rates mean high inflows — and greater exposure to volatility: Egypt offers one of the world’s highest inflation-adjusted rates, leading to a boom in foreign holdings of Egyptian debt, which hit a record USD 33.3 bn at the start of August, Bloomberg writes. High inflows have helped the state finance spending — but a reliance on foreign investors leaves us vulnerable to volatility in the fixed-income markets, while elevated rates mean the cost of debt service is also comparatively high. A hike in global rates may see Egypt pressured to pay out higher yields to stem the outflows.

We’re positioned to avoid the worst of an EM sell-off: Historically, global rate movements haven’t had much impact on the local picture, Shamaila Khan, head of emerging-market debt at AllianceBernstein in New York, told Bloomberg. “If other emerging markets are pressured, I would expect Egypt to still perform well on a relative basis,” she said. On debt service, S&P said the government has made “notable progress” in lowering the burden. The proportion of the state budget allocated to debt service was down to 36% as of June from 40% a year before, with a target of 32% by June 2022, Finance Minister Mohamed Maait has said. Meanwhile, a turn toward offering longer-term debt instruments — the average maturity has doubled since 2013 to reach 3.26 years — may help insulate the country from a shock sell-off.

Real economic growth is outpacing the rise in debt: GDP continued to rise during the pandemic, albeit at a slower pace than before, proving the country’s resilience as developed nations and peers in the oil-reliant Gulf took a harder hit. The economy grew at a 3.3% clip in the 2020/2021 fiscal year, with a target to rebound to pre-pandemic growth levels of 5.5% this FY. Strong growth has tempered the impact of rising debt: while the debt-to-GDP ratio ticked up as the result of the pandemic to 90.6% in June 2020 from 87.4% a year before, it is expected to return to a years-long declining trend come 2022.