When whales walked on land 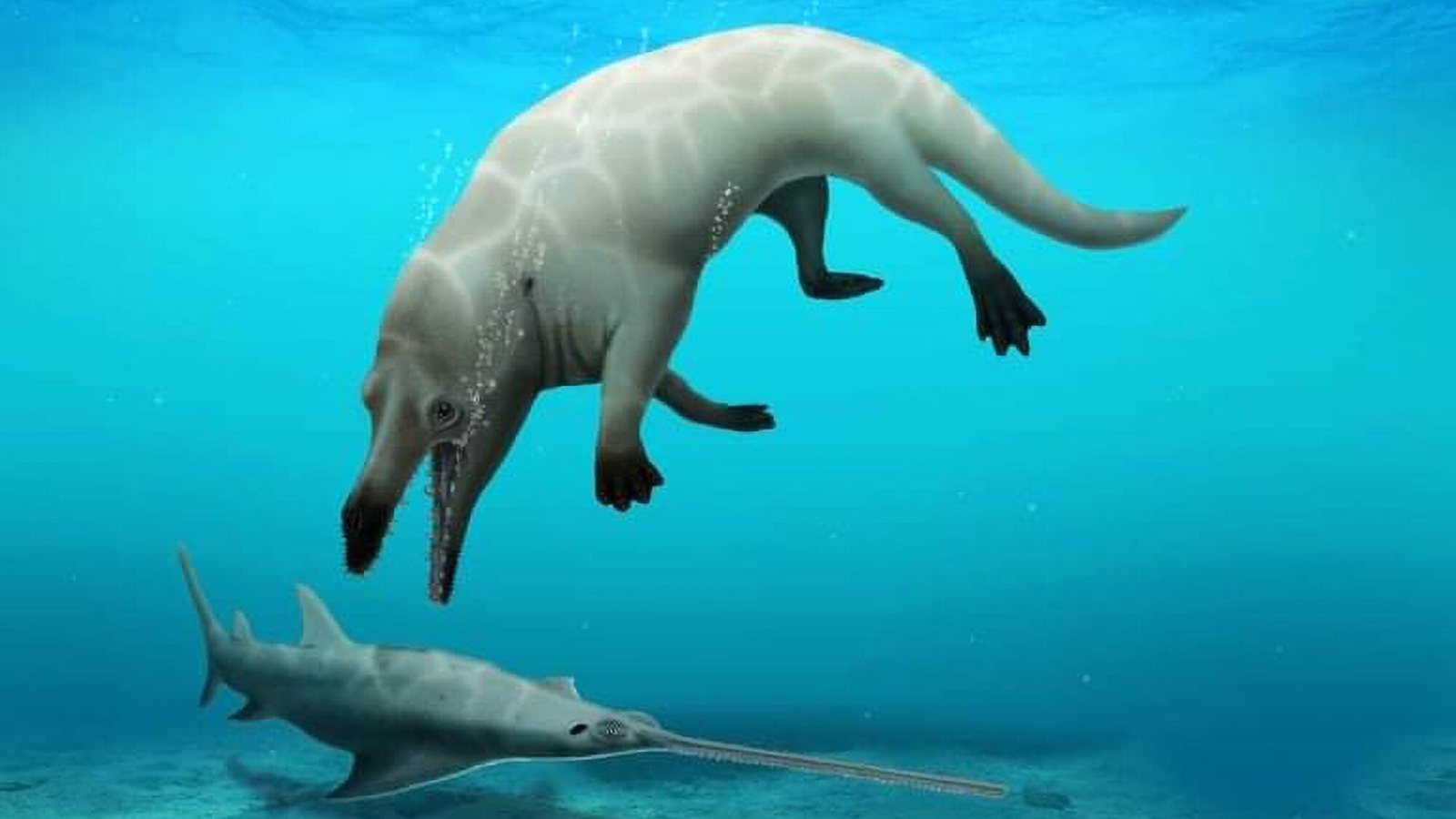 An all-Egypt team of archaeologists has unearthed a new species of prehistoric amphibious whale in a discovery that could be a vital link in helping us to understand how the mammals evolved from living on the land to living in the sea. Found near Fayoum by a team of paleontologists from Mansoura University, the 43-mn-year-old fossil reveals a new type of four-legged whale that once existed in Africa, one that lived both on land and in the sea. Led by Abdullah Gohar, the team at the university’s Vertebrate Paleontology Center recently published their findings in the peer-reviewed journal Proceedings of the Royal Society B, gaining international media attention for the landmark discovery.

The whale of death: Named after the ancient Egyptian god that helped shepherd deceased kings to the afterlife, the Phiomicetus anubis is estimated to have been 3 meters long and weighed about 600 kilograms, making it the first discovery of a carnivorous whale that preyed on other mammals. “We discovered how fierce and deadly its powerful jaws are capable of tearing a wide range of prey … this whale was a god of death to most of the animals that lived in its area,” Abdullah Gohar, who led the team of scientists, told Insider.

A long time coming: The remains were first found 13 years ago but were only analyzed relatively recently after 2017, one official at the Environment Ministry told the Scientific American.

This isn’t the first time we’ve heard of walking whales in Egypt: The first “protocetid” was actually discovered here more than a century ago by German paleontologist Eberhard Fraas, who found a mysterious skull and some vertebrae near Cairo of what turned out to be one of the earliest types of whales.

Wait, why are whale fossils being discovered in the desert? Although the area is now a desert, it was once submerged under the sea and is rich with fossils. Researchers have found in the area “semiaquatic crocodile-like whales to giant fully aquatic whales” dating back to the Eocene epoch, a 22 mn-year period that lasted from 56 mn to 33.9 mn years ago.

The Western Desert is one of the richest places on Earth for whale fossils: Wadi Al Hitan or the Whale Valley in the Western Desert is a Unesco World Heritage site home to the earliest species of whales in the world, according to the National Geographic. It is the only place in the world where prehistoric whales can be found in their original geological and geographic setting. Over the past few decades, the remains of more than a thousand whales have been discovered and countless more will be discovered, researchers say.

Mansourasaurus was unearthed in the same area: Mansoura University’s palaeontology department was also responsible for the ground-breaking discovery in 2018 of the 80-mn-year-old dinosaur Mansourasaurus in Dakhla Oasis in the Western Desert. The site was also where another prehistoric species of whale – Rayanistes afer – was discovered.

From land to sea: Having four fully-functional legs means that whales used to walk on land as well as swim in the sea, with both aquatic and terrestrial traits. This marked the middle of an evolutionary shift that changed whales from deer-like herbivores to the aquatic behemoths we know today. The new discovery belonged to a group of extinct whales called Protocetidae that fell in the middle of the transition, when whales stopped being land lovers and started preferring the sea.

An evolutionary U-turn: Whales were one of the very few mammals that took an evolutionary U-turn and headed back to the sea. The common ancestor of whales which existed some 360 mn years ago originated from the sea and evolved to survive outside water, improving its lungs and transforming its fins to legs. But in what the National Geographic calls an “evolutionary U-turn” their terrestrial body also adapted, allowing them to move, eat and mate underwater. How whales accomplished such an enormous transformation has baffled even the greatest scientific intellects,” it writes, calling the creatures one of the great challenges to Charles Darwin’s theory of evolution.

How whales evolved in Africa is still largely unknown. But such discoveries can tell us about the evolutionary change from amphibious to fully aquatic whales. The discovery is critical to helping scientists understand whales’ transition from land to sea, researchers say.