Measuring peace across the globe 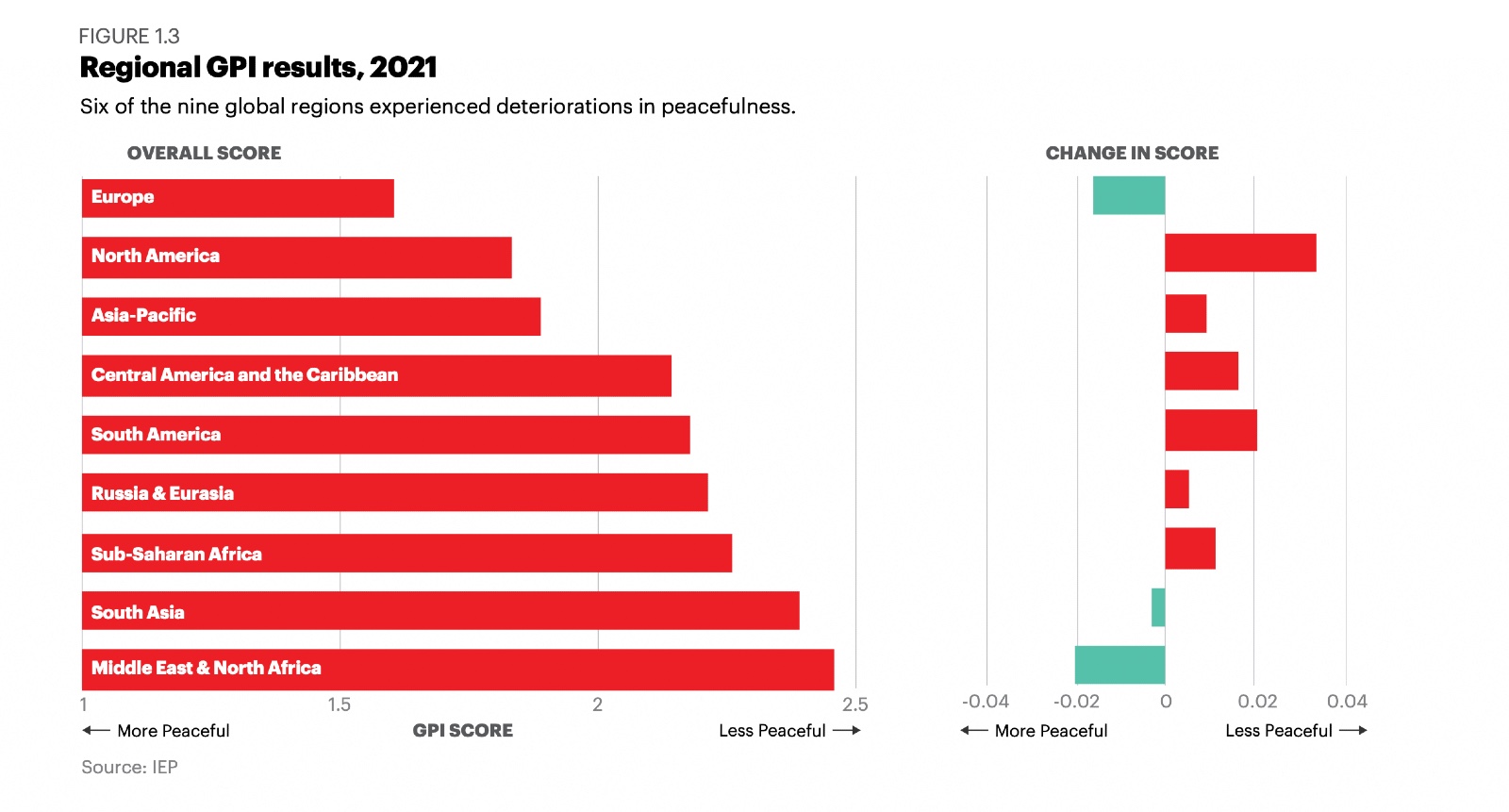 The world is becoming more troubled: There are often clear signs that a country’s order is eroding, from a crackdown on press and oppositional voices to a currency going haywire. The Global Peace Index Report 2021 created by the Institute of Economics and Peace (IEP) has set out to chart which of the 163 surveyed countries have become more peaceful and which are turning more crackpot.

The metrics: Countries are ranked on two different metrics. The Positive Peace Index (PPI) is a composite measure of factors that might be expected to make a country more peaceful. These include a country’s levels of corruption, human capital, broad access to public services such as health and education, and a well-functioning government. Countries that perform well on the PPI index are usually less tolerant of violence and offer peaceful channels to resolve disputes. The second metric is the Global Peace Index (GPI), a measure of how peaceful the country actually is. This is based on a further 23 weighted indicators, such as the country’s homicide rate, the ease of access to weapons and the levels of political violence and terrorism.

The IEP has been pretty accurate before… Egypt is a case in point: In 2009, it ranked Egypt #63 on the GPI but #115 on the PPI. The Positive Peace Deficit (when countries rank at least 20 places higher on the GPI than the PPI) was attributed to former President Hosni Mubarak’s muzzle on dissent which muted voices without fixing their concerns. Two years later, mns of Egyptians took to the streets in protest, calling for a new government to resolve their grievances. The PPD model is often looked at as having predictive power of future conflicts.

This past year has seen the average level of global peacefulness deteriorate by 0.07%, with 87 countries improving, and 73 declining. However, the change in score is the second smallest in the history of the index. The 2021 GPI instead reveals a world greatly affected by the global health issues taking the world by storm. The covid-19 pandemic has slowed down some forms of violence in the short term, however the growing unease with lockdowns and rising economic uncertainty resulted in civil unrest increasing in 2020. While it’s still too early to determine the long-term effects of the pandemic on peace, the increased economic stress increases the likelihood of political instability and violent demonstrations, the reports says.

The most peaceful countries in the world are topped by Iceland, a position it has held since 2008. Rounding out the top five countries are New Zealand, Denmark, Portugal, and Slovenia.

Afghanistan is the least peaceful country in the world for the fourth consecutive year, followed by Yemen, Syria, South Sudan, and Iraq.

Regionally, six of the nine global regions became less peaceful in 2020: Europe was placed as the most peaceful region, also recording an increase in peacefulness over the year. Meanwhile, North America ranked second, but constituted by far the largest regional deterioration after growing civil unrest and political instability took place in the US.

While MENA remains the least peaceful region in the world, it saw the largest improvement over the past year. The level of ongoing conflict fell, as did the impact of errorism and the number of deaths from internal conflict. Meanwhile, the economic impact of violence also improved across four regions. Qatar (#29) is the region’s most peaceful country, followed by Kuwait (#36) and the UAE (#52).

Where does Egypt rank? Egypt’s overall rank across all 163 countries is #126, up three places from last year. Regionally, Egypt comes in at #11, out of the 20 total MENA countries looked at.

What held us back? Tensions between Egypt, Ethiopia, and Sudan over the Grand Ethiopian Renaissance Dam were a source of diplomatic friction and possible escalation of violence over the past year. The report also points to several medical staff being detained for spreading news on social media about the lack of personal protective equipment and the lack of covid-19 testing.

It wasn’t a great decade for us as far as the GPI is concerned: Egypt was among the 10 countries that saw the largest falls in GPI between 2009 and 2019, joining countries such as Libya, Syria and Ukraine.