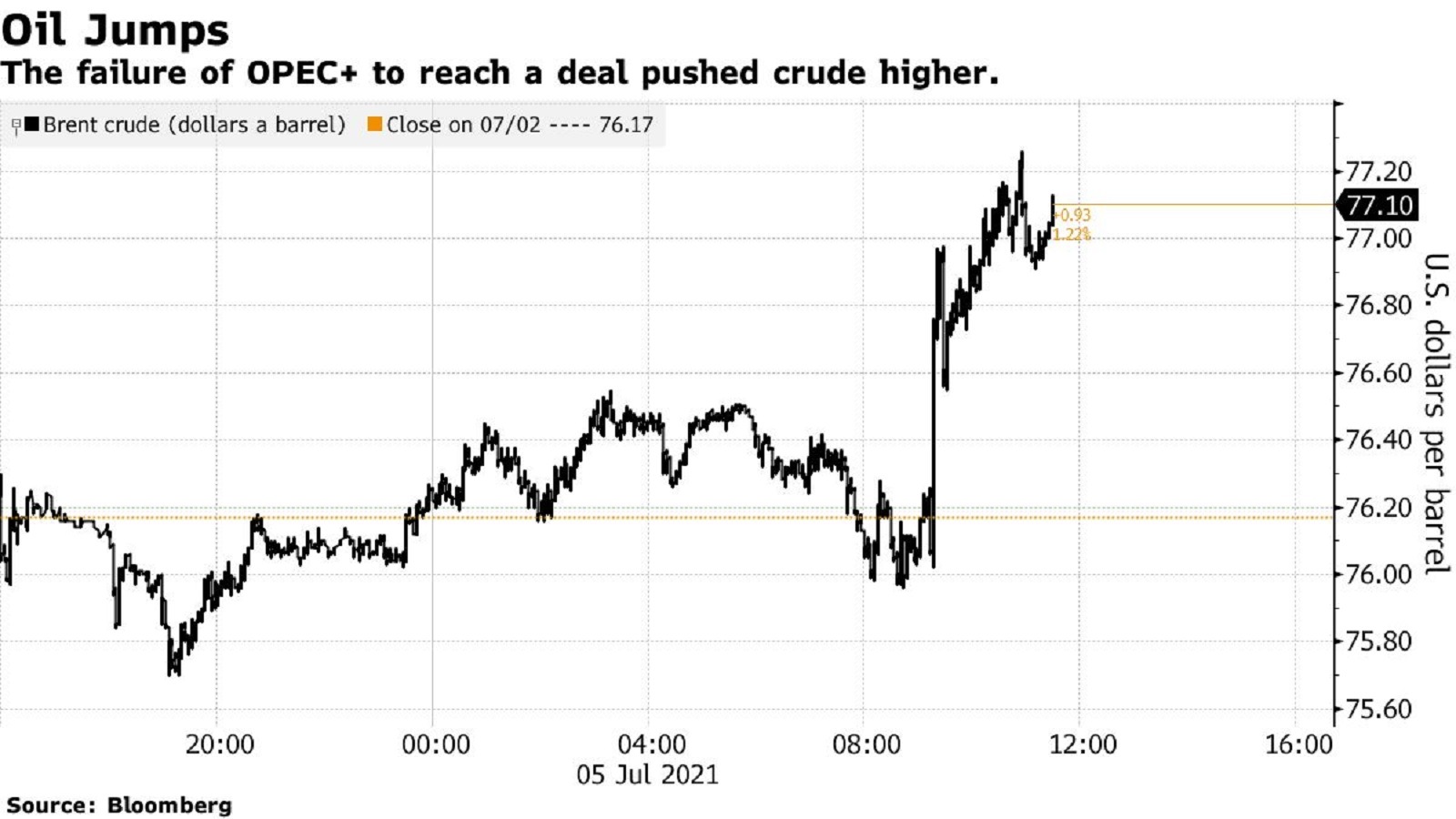 Oil surges to new three-year high after UAE-KSA deadlock tanks oil supply agreement: Brent crude surpassed USD 77 per barrel for the first time since September 2018 yesterday after the OPEC+ alliance of oil producers were unable to come to an agreement on raising supply, Bloomberg reports.

Close: Most producers signed onto a plan last Friday that would have raised oil production by 400k barrels a day each month between August and December, while extending the final expiry of the output cuts to the end of 2022 instead of April.

But no cigar: The UAE has been the fly in the ointment, being the only country to reject the proposal and argue that its production quotas were unfair. Yesterday Abu Dhabi had reportedly agreed to its new production limits provided the cuts expired in April, but Saudi Arabia said it must accept both parts of the proposal.

Expect a pop: Failure to agree on new production quotas is likely to tighten supply further and put further upward pressure on prices. The cost of oil has continued to climb in recent weeks as a surge in demand outweighs current supply, which is still being curtailed by production cuts introduced last year following the market crash. This will lead the oil prices to “pop,” one energy analyst said. “That’s also not tenable because a price spike actually undermines the interests of the UAE, Russia and Saudi Arabia,” he added

Or another price war: Rather than Riyadh vs. Moscow, this time around the fears are that a breakdown in relations between the Saudis and the UAE could trigger a new price war, with producers jettisoning the OPEC+ alliance, cranking up production and causing prices to crash.

The KSA-UAE clash is going beyond oil policy: Tensions between the long-time allies are also being fuelled by a new import ban announced by the Saudis and a decision to prevent its citizens travelling to the UAE due to covid.

Until we meet again (whenever that is): Production restrictions will remain in place until OPEC+ members convene again. Unusually, the group hasn’t set a date for its next meeting, with OPEC saying that it will be decided “in due course.”

What does all this mean for Egypt? Events over the coming days will be being watched closely by the government’s fuel pricing committee, which this week is discussing whether to raise or leave on hold domestic fuel prices during the coming quarter. The committee should come up with a decision by 10 July, but could be extended further into the month.

The story is getting buckets of digital ink in the global business press this morning: FT | Reuters | CNBC | Wall Street Journal.