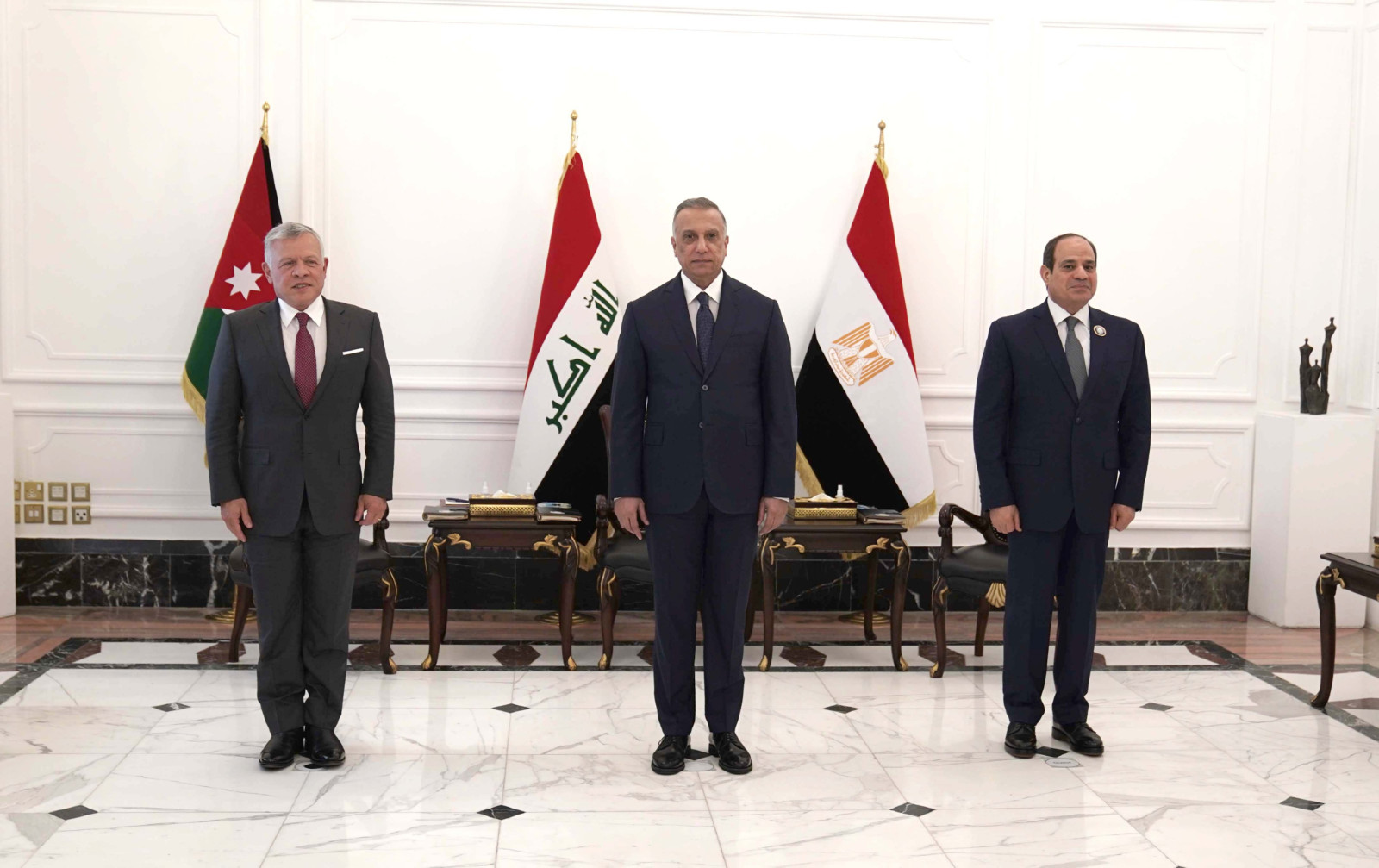 President Abdel Fattah El Sisi became the first Egyptian head of state to visit Iraq in more than 30 years yesterday as he travelled to Baghdad for three-way talks with Iraqi President Barham Salih, Iraqi Prime Minister Mustafa Al Kadhimi and Jordan's King Abdullah II. The talks saw the three countries agree to deepen security and economic cooperation —and featured discussions about terrorism, the dispute over the Grand Ethiopian Renaissance Dam (GERD), the situation in Palestine, and the reconstruction of Iraq, according to two Ittihadiya statements (here and here) following the meeting. Foreign ministers from the three countries also met in Baghdad yesterday, and said during a post-meeting presser that Iraq and Jordan both backed Egypt’s position on GERD (watch, runtime: 14:19).

The three countries have been deepening ties in recent years: El Sisi’s last trilateral summit with Iraq and Jordan’s leaders was in Amman last summer, when the three sides agreed to strengthen economic, energy, investment and infrastructure ties. Two years ago the three countries agreed to set up joint industrial zones and look at lowering trade barriers. There are reportedly plans to export Egyptian electricity to Jordan and Iraq and there is also talk of reviving plans to construct an oil pipeline running between Egypt and Iraq through Jordan. Egypt and Jordan had signed seven agreements on telecoms, energy, trade, housing, and archaeology projects during Prime Minister Moustafa Madbouly’s visit to Amman in March — the same month Foreign Minister Sameh Shoukry met with his Iraqi and Jordanian counterparts to discuss regional developments.

And Egypt has been keen to get involved in the reconstruction of Iraq: Egypt and Iraq have stepped up bilateral ties in recent months. Last year, the two countries signed 15 MoUs covering everything from oil and water resources to construction, transportation and environmental protection, as well as an “oil-for-reconstruction” agreement, which is seeing Iraq supply the Egyptian General Petroleum Corporation with 12 mn barrels of oil this year. This was followed last week by an agreement between the two countries’ ICT ministries to increase investments in digital and telecom infrastructure.

The story is dominating the coverage on Egypt in the foreign press: Reuters | Associated Press | AFP | The National.