US regulators could soon begin sinking their teeth into SPACs after Gary Gensler was appointed by the Biden administration to head the Securities and Exchange Commission, the Financial Times reports. Special purpose acquisition companies (SPACs), which have over the past year generated a USD 142 bn pool of capital and drawn enormous interest from retail investors, institutional powerhouses and celebrities alike, are expected to see increased scrutiny under the SEC’s new head, who built a reputation for being tough on Wall Street in the aftermath of the financial crisis during his time heading the Commodity Futures Trading Commission.

A dramatic shift? Although we’ve yet to see robust formal investigations of SPACs over the past year — beyond a few SEC inquiries into underwriting activities at Wall Street banks — insiders are expecting this to change with Gensler helming the SEC, with Luke Cadigan, a former prosecutor in the SEC’s enforcement division, telling the salmon-colored paper that the regulatory landscape will “change dramatically in the weeks and months to come.”

No more flimsy revenue projections? Disclosures are expected to become the central focus of regulators who are looking to close gaps that allow companies to make exaggerated claims of future financial performance and facilitate hidden conflicts of interest. Tech start-ups like UK electric vehicle group Arrival and taxi start-up Archer are among the companies that have been advised to make grandiose forward-looking statements of the kind avoided by firms launching traditional IPOs for fear of lawsuits. Under a legal exemption that treats SPAC firms as mergers, companies have been allowed to make revenue projections based on little evidence, and sometimes before any of their products hit the market. Regulators are concerned about the market impact of financial projections that are divorced from the fundamentals and could move to enforce stricter rules on forward looking statements.

And banks might also be in the firing line: Other economists and regulators are demanding more fundamental changes to the regulation of SPACs, lobbying the SEC to make banks that underwrite transactions liable in the same way they are for IPOs. The regulator has been in contact with banks asking for more details on their activities in the SPAC market, sources tell the FT.

The way that the market is currently structured incentivizes poor due diligence, short sellers and market watchers say. Sponsors end up striking bad agreements due to the two-year deadline to find a target and take it public. Rather than spend longer finding stronger companies, the threat of losing in the event of failing to find a target produces weak due diligence, they say. Public excitement for these companies is then drummed up, regardless of their commercial viability. Fears that ordinary investors are being misled about the real prospects of some of these companies has already prompted the acting director of the SEC’s division of corporation finance, John Coates, to issue a warning of heightened scrutiny to come.

SPACs appear to have already begun losing steam with last month being the slowest for SPAC-based IPOs since last June. Less than a dozen companies were listed over a three-week period, down from a five per business day average seen during the first three months of the year. Dwindling retail enthusiasm for SPACs resulting from expectations of a coming crackdown on the public offerings has sent shares in companies like electric truck maker Nikola and battery company QuantumScape down by as much as 80% and has left two thirds of unlisted SPACs trading at less than USD 10 per share. Short sellers are also getting in on what is increasingly looking like a bear market, with the value of short positions taken against SPAC shares tripling to USD 2.7 bn in mid-March. 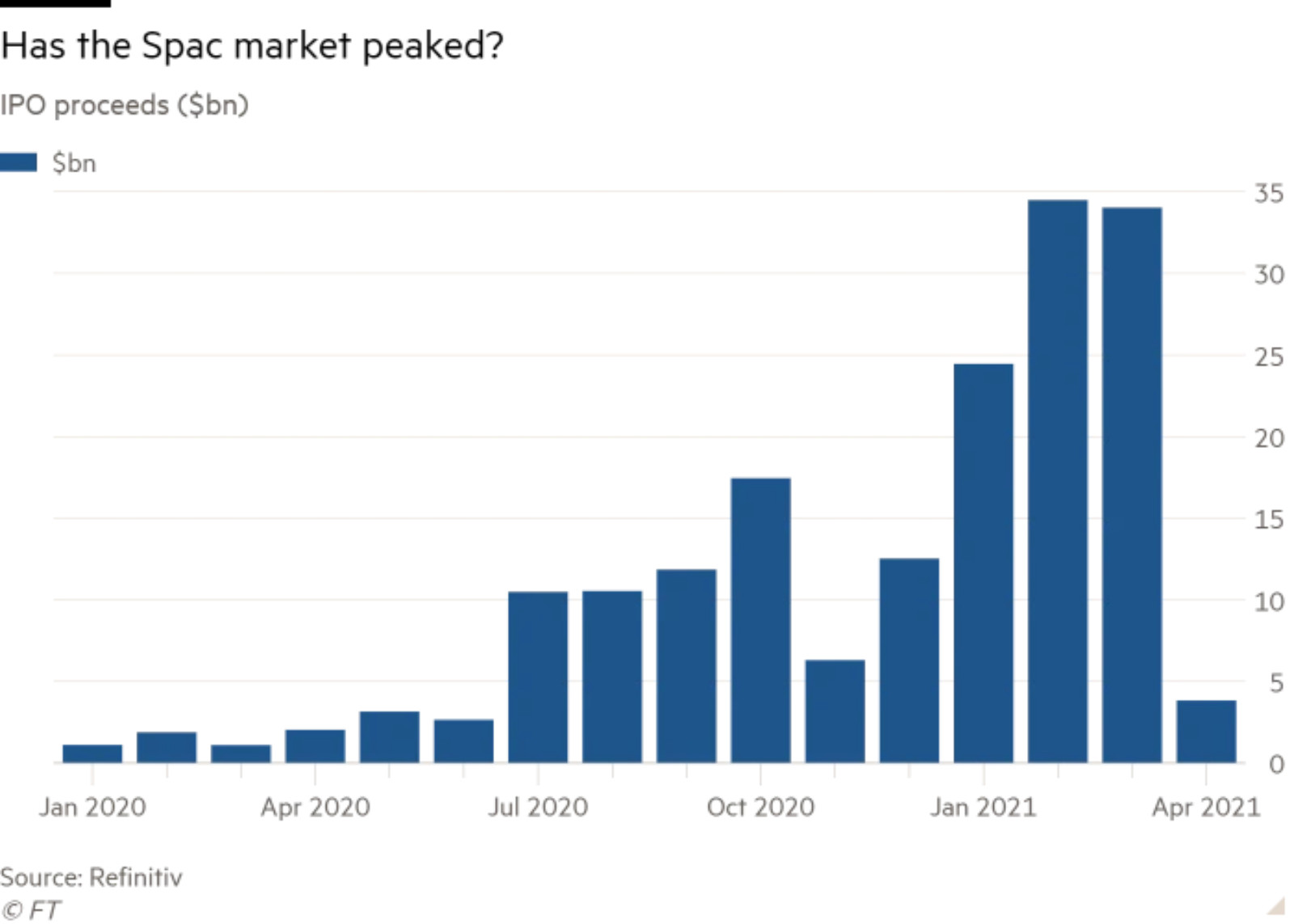