Good afternoon, and welcome to the weekend+ edition, as much of the news day consisted of updates to main headlines that dominated the weekend news cycle.

THE BIG STORY at home this afternoon is the ongoing saga of the Ever Given, which remains stuck for a sixth day now. We have the latest updates in the Speed Round below.

Subscription to the retail component of the Taaleem IPO has kicked off. We cover the announcement chapter and verse in the Speed Round below.

CORRECTION: In this morning’s EnterpriseAM, we said that Taaleem had priced its IPO at EGP 6.20 per share. We were incorrect. A close reading of the disclosure from the Financial Regulatory Authority indicates that Taaleem could price its IPO at up to EGP 6.20 per share, not at EGP 6.20. The company had previously said it expected to price the transaction at EGP 5.48-6.02 per share, and a senior source with first hand knowledge of the transaction confirmed to us this afternoon that CI Capital will price the offering within this range. We have amended the story on our website.

HAPPENING NOW- The House of Representatives has approved in principle legislation that would impose harsher penalties for FGM, reports Youm7. The tougher punishments for FGM moved through the House Legislative Committee last week and were approved in both circles.

Also on the House’s itinerary for today is discussion on the long-held up Water Resources Act that will introduce stricter penalties for water waste, while addressing pollution, dwindling resources, and climate change issues.

The central bank has put out another official warning of the fundamental dangers of crypto. Cryptocurrencies including Bitcoin are “extremely volatile” and risky investments that are neither based on tangible assets nor centrally regulated, making its holders susceptible to sudden losses in value, the CBE said in a statement (pdf) this afternoon. This comes as a reminder for people to abide by Article 206 of the recently-enacted Central Bank and Banking Act (pdf) — which prohibits issuing, trading and promoting crypto in Egypt without explicit licensing from the CBE’s board.

THE BIG STORY ABROAD- Abu Dhabi will begin selling tomorrow futures contracts for its flagship Murban oil grade, potentially changing how Middle East oil is priced, according to the Emirates News Agency (WAM). Abu Dhabi hopes that the futures will become the region’s main benchmark as opposed to other grades (such as Brent crude), writes Bloomberg. The move is also hoped to open the local oil sector to financial traders. The futures platform will be run by USA-based Intercontinental Exchange Inc. and called ICE Futures Abu Dhabi. Goldman Sachs, Citigroup, and 22 other banks and brokers will act as exchange members

Equipping Port Fujairah for the pivotal shift: Once sold on an exchange, Murban will be sent by pipeline to Fujairah, and then shipped to global markets. State-owned Abu Dhabi National Oil Company (Adnoc) has earmarked around USD 900 mn to build 40 mn barrels of storage space in caverns beneath Fujairah’s mountains to ensure there’s plenty of Murban on hand to manage any future supply disruptions, Khaled Salmeen, the company’s head of marketing and trading, had previously said. The UAE says Murban futures won’t affect OPEC or its ability to stabilize oil prices, Adnoc’s Group Head of Trading Philippe Khoury was reported as saying.

The Egyptian-Croatian Business Forum meets this Wednesday, 31 March, for the first time

since 2010. On the table: Giving a nudge to both trade and investment, a FEDCOC statement says. Croatian Foreign Minister Gordan Grlić-Radman and Foreign Minister Sameh Shoukry are expected to attend.

The Arab Federation of Exchanges Annual Conference 2021 will kick off tomorrow and run until Tuesday. This year’s virtual conference will discuss ESGs for economic growth and capital markets as well as fintech and innovation.

The Startup Festival is currently ongoing in Sharm El Sheikh and will run until tomorrow. The festival will gather investors, entrepreneurs and policymakers and more than 80 startups will participate in the exhibition, which will feature panel discussions and workshops.

The HVAC-R Egypt Expo will take place from 1-3 April at the Egypt International Exhibition Center in New Cairo. The fifth annual expo for heating, ventilation, air conditioning, refrigeration, and energy and brings together more than 170 national and international operators with different suppliers.

The National Museum of Egyptian Civilization is set to open on Saturday, 3 April in El Fustat. Local and international visitors alike will pay less for admission for the first two weeks to explore the museum’s central hall, according to a cabinet statement. Meanwhile, the Royal Mummies Hall will be ready for visitors starting 18 April.

AUC Press’ Mad March book sale will wrap up by the end of the month. The sale is open to the general public every day from 10am–6pm CLT at AUC Tahrir Bookstore & Garden. 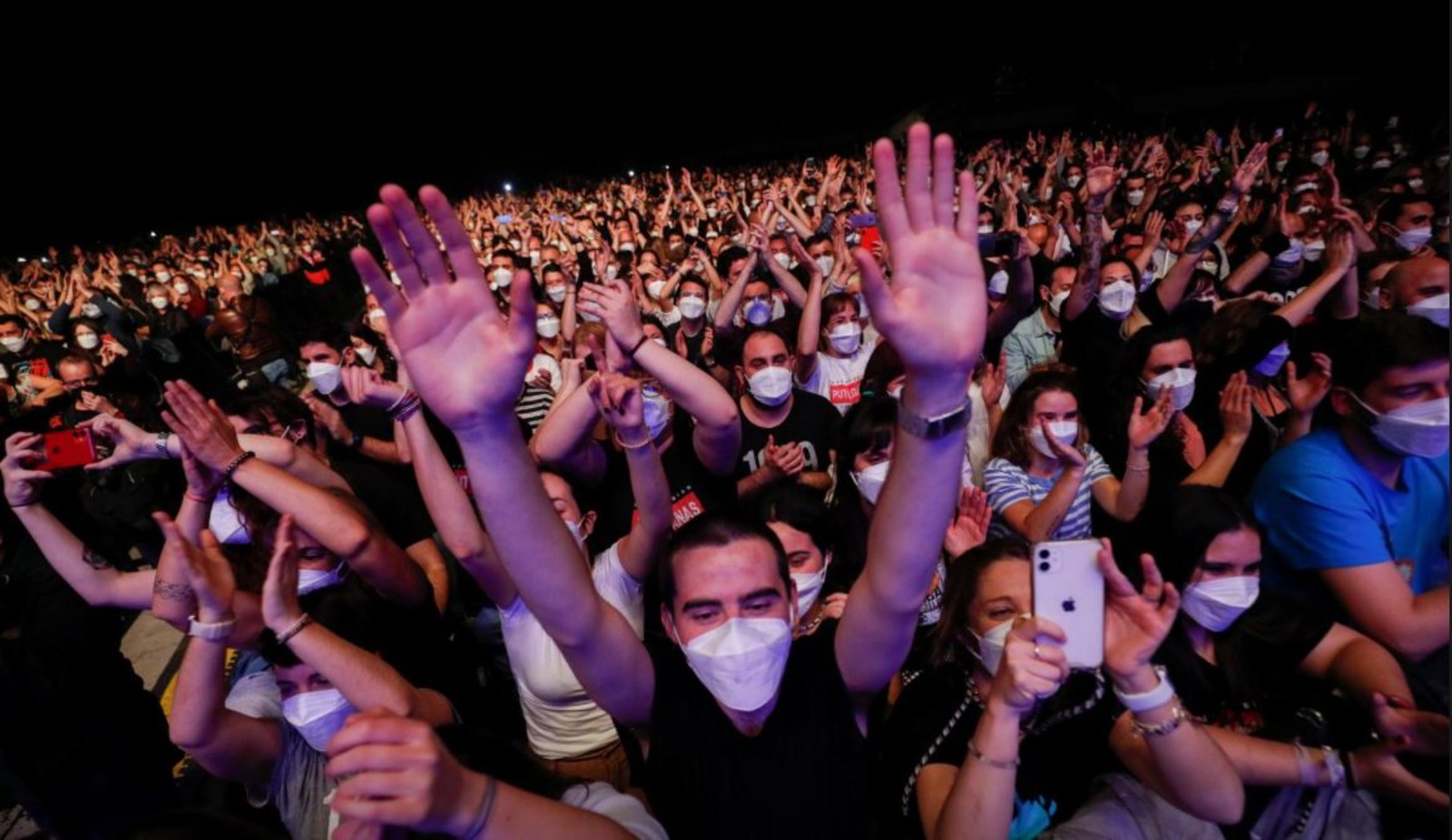 Spain held a concert with 5k fans as the country tested the revival of big events during the pandemic, reports Reuters. Saturday’s concert go-ers had to arrive early and have rapid covid-19 tests before being allowed to enter the venue. Those who tested positive were seen dancing and singing together in a packed concert with no social distancing, but with masks on.

Apple TV has released Calls, an avante-garde series that relies more on audio than visuals, with each episode featuring an eerie phone call conversation as a group of strangers simultaneously experience an apocalyptic event. The series pushes the limits of what visual storytelling can be through its risky choices and techniques.

A quick crime docuseries for those of you into that: Under Suspicion: Uncovering the Wesphael Case on Netflix looks into the high-profile case of Belgian politician Bernard Wesphael, who was accused of murdering his wife in 2013.

The 2021 Africa Cup of Nations (Afcon) qualifiers are going strong with Ghana to play against São Tomé and Sudan against South Africa tonight at 6pm.

CORRECTION- Egypt will be playing its Afcon match tomorrow at 6 pm against Comoros and not today as we incorrectly noted in EnterpriseAM.

The FIFA World Cup European Qualifiers are also up and running with some matches to note including: Georgia to face off against Spain today at 6pm, Albania against England at 6pm, Romania against Germany at 8:45pm, and Bulgaria against Italy at 8:45pm. Kazakhstan is currently on the field against France as we dispatch this newsletter.

A proud day for African contact sports: For anyone following mixed martial arts, Cameroonian bomber Francis Ngannou became the new UFC undisputed, heavy-weight champion of the world this morning after beating the defending champion Stipe Miocic in a second round knockout at UFC: 260. You can watch some of the highlights here (watch, runtime: 2:33).

Your feel good moment for the day: The victory is even sweeter when you consider the challenges Ngannou had to face to get to where he is. Born to abject poverty, Ngannou (who spent most of his life not knowing what MMA even was) spent his childhood working to help support his family, before moving to France and living on the streets in an attempt to kickstart his boxing career. Hear him tell his life story to Mike Tyson in this episode of Hotboxin’ (watch, runtime: 1:25:04).

Deep dish pizza in all its glory: If you’ve tried Chicago-style deep dish pizza, you’ll know it’s an experience that fills your belly and heart with joy. American restaurant Country Hills has brought us deep dish pizzas galore, as well as a menu filled with other soul food including burgers and mac and cheese. Of course, we recommend the deep dish pizza — go for their lone ranger (hot dogs and pepperoni) and their shrimp volcano — but if you want something less filling-for-days, try their thinner New York-style pizza. We loved their buffalo ranch crispy chicken pizza and texas chili fries pizza. You can find Country Hills at Mall of Egypt and City Stars as well as in Heliopolis, Alexandria, and Mansoura.

Another Comedy Bunker is taking place at The Room Art Space in New Cairo tonight, with this event promising surprising new faces to take to the stage and perform their stand up comedy act. The event is set to start at 9pm.

Ubuntu Gallery is showing the gallery Reimagined Memories which brings together several works focusing on the textile hangings of Cairo. From weddings, to moulids, to public events, Cairo is known for bringing out colorful and textural cloth hangings at big events to decorate the street and signify the type of event. The exhibit — curated by Seif El Rashidi — poses the question as to whether this form of expression has a future in the city.

The Nile Art Gallery is hosting the exhibition Bayati by Hany Abdel Badee.

🌤 TOMORROW’S WEATHER- More of the same tomorrow, with daytime highs of 23°C and nighttime lows of 10°C, our favorite weather app tells us. Expect the weather to stay in this range for the rest of the week.