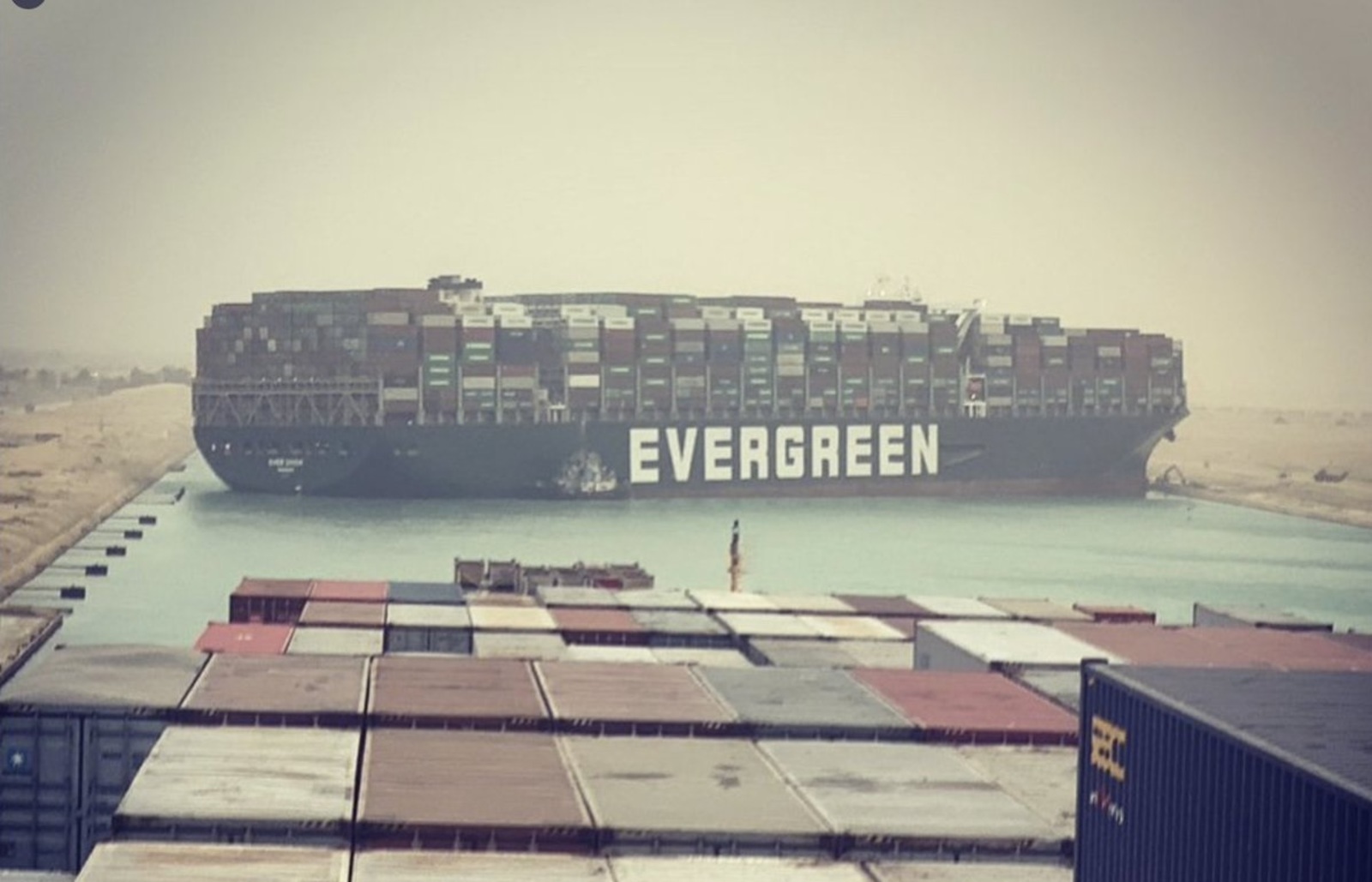 All eyes are on Egypt as a maritime traffic jam at the Suez Canal sees at least 100 vessels stranded in the Red Sea and the Mediterranean — raising global concerns that this might impact global shipping, supply chains, and oil prices. Authorities are racing against the clock to refloat the 224k-tonne, 400-meter-long container ship chartered by Taiwan’s Evergreen, which ran aground and blocked the waterway. Eight tug boats have been working to tow the MV Ever Given from the bank, the Suez Canal Authority said this morning. As of dispatch time, the authority hadn’t confirmed that the vessel had been partially refloated.

What happened? The mega vessel was en route from China to Rotterdam when high winds and a dust storm at 7:40 am CLT Tuesday left the crew unable to steer the ship several kilometers near the Suez Port, hitting the canal’s embankment. Some 42 other vessels travelling northbound to Europe, either as part of Ever Given’s convoy or arriving in transit, are waiting to head back to sea. As many as 64 other southbound ships have also been affected, transit service provider Leth Agencies told its clients, according to Bloomberg.

Some traffic in the Suez Canal could resume later today or tomorrow, Ahmed Mekawy, deputy head of Gulf Agency Company’s (GAC) canal operations said, according to Bloomberg. The Ever Given is expected to be fully cleared to continue sailing northbound shortly, but it remains stuck, Mekawy said following a statement by transit service provider GAC that had inaccurately suggested the ship was partially refloated.

It might be possible for authorities to divert traffic through the old canal, the canal authority said. Two senior Egyptian officials told the newswire that this could clear up some congestion, but both Reuters and Bloomberg suggest the vessel is blocking the accessway to the original body of the canal.

The vessel’s grounding led to growing worries that the canal could be clogged for days, with Bloomberg quoting sources this afternoon saying early attempts to pull the vessel out were unsuccessful due to the size of the ship and the small towing boats used by the authority. Its sources suggested larger towing boats with more power might be required to steer the vessel off the embankment and that the owner of the ship has contacted towing firm SMIT Salvage to help in operations.

The global impact: Asia-Europe trade flows could be severely impacted if this lasts, causing serious delays should vessels be forced to use the alternative route rounding the Cape of Good Hope, which is a week slower, Reuters quoted Liner Research consultant Tan Hua Joo as saying. Some 12% of world trade volume passes through the vital Suez Canal, including some 30% of the world’s container ship capacity, the newswire noted, citing Liner Research and other official figures. The most common cargo carried through the canal are crude, refined energy products and consumer goods, S&P Global said.

We might also see port congestion in Europe: Delayed cargo could start pouring into EU ports when the canal reopens as it would arrive at the same time as cargo sailing behind it, SeaIntelligence Consulting chief executive Lars Jensen said.

Oil is particularly sensitive to slightest shipping disruption: Some 66% of oil sent from the GCC to western countries is shipped through the Suez Canal or the Sumed pipeline linking Alexandria to the Red Sea, Suez Canal Authority boss Osama Rabie said last month. “The inability of oil to transit a major chokepoint, even temporarily, can lead to substantial supply delays and higher shipping costs, resulting in higher world energy prices,” the US Energy Information Administration (EIA), meanwhile, noted in a 2017 note. Closure in the canal or the pipeline would mean oil tankers would add some 2.7k miles to transit between Saudi and the US using the Cape route, the EIA estimates.

But oil markets have held steady on expectations the blockage will be cleared soon. Oil futures in New York were trading 2.5% higher just before dispatch after having earlier climbed 3.2%.

Everyone and their mother is talking about Egypt this morning: Associated Press | FT WSJ | NYT | BBC | CNBC.