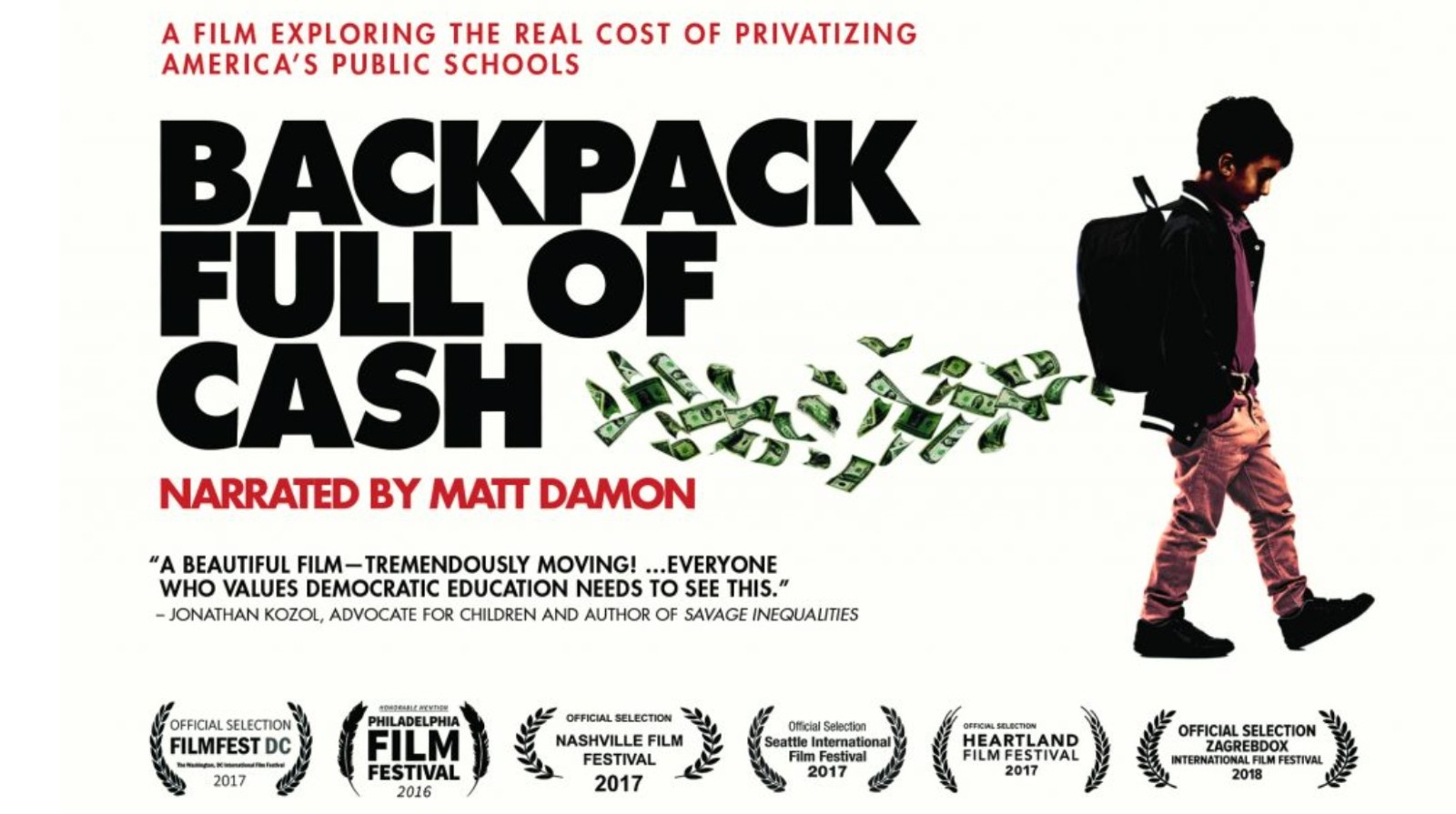 It’s the Blackboard education documentaries issue: As a fun interlude, we decided to take a look at recent documentaries about the business of education. Many of these focus on how to maintain quality and applicability while ensuring fair access. In the US, “education reformers” are pushing for more K-12 standardized testing and privately-managed charter schools, while universities increasingly operate as private businesses, with tuition fees to match. Throughout Africa and Asia, policymakers, academics, students and employers grapple with questions about education quality, access and cost.

“Backpack Full of Cash” looks at the US K-12 debate — charter schools vs public schools: “Backpack Full of Cash” (watch, runtime: 93 minutes) asks if privatizing the US public education sector improves education. As of 2015, US public schools educated 90% of American students — 50 mn children — at a cost of about USD 600 bn a year. Education reformers argue it’s more efficient to run the whole system like a business, with parents able to shop around for competition-based charter schools — which receive public funding but are exempt from the state laws and regulations governing public schools. But charter schools are accused of siphoning off public funds to maximize shareholder income, widening inequality and mismanaging finances — with no evidence to show they actually perform better than public schools.

While “School Inc,” advocates for charter schools, on the grounds they offer more freedom of choice: “School Inc.” (watch episode 1, runtime: 56:35), a three-part documentary series produced by the libertarian think tank the Cato Institute, offers a very different perspective. Its argument is that charter schools offer freedom of choice not available in the public school system, and that excellence in US public schools hasn’t scaled up like innovations in other fields. Public subsidies and competition would allow it to: Both historically helped private schools lower their prices and improve quality, the films argue.

“School, Pressure & Innovative Education” shows that in South Korea you can’t succeed without private academies: “School Inc.” extols the benefits of South Korea’s hagwons — private after-school academies attended by some 80% of the population. But while hagwons train children to do well in international tests, they also gobble up a significant portion of parent incomes, says Deutsche Welle documentary “School, Pressure & Innovative Education” (watch, runtime: 26:01). South Korean children study for 4-6 hours a day at hagwons, after a 7-hour school day. They also face tremendous pressure: The number one cause of death for South Koreans aged 9-24 is suicide.

But South Korean edtech innovators are also enhancing accessibility: Mass online classes and new edtech developments are helping to meet the need for extra tuition. Online teaching ‘superstar’ Kil-Young Cha reaches up to 1 mn students through his classes, while earning USD 6 mn a year. Sera Lim, designer of Marvrus, VR software that allows students to virtually “travel” to English-speaking countries to practice their English, had supplied the software to over 7k students and 100 schools as of June 2020. She aims to narrow the education gap, she says.

“Education Education” looks at how China’s higher education can come with enormous debt: There’s a fierce struggle for China’s subsidized public university seats, according to “Education Education” (watch, runtime: 59:01). At private universities, four years of tuition can cost some families 60 years of income, but some unscrupulous private universities deliberately target low-income families, lying about the academic rigor of their courses to persuade parents to make down payments, the film shows. They promise a university degree will lead to a good job and steady income, assuming low-income families won’t assess their real value proposition before paying. But in the deeply competitive labor market, university graduates struggle to find work and financially sustain themselves, even with very modest expenses.

And with debt soaring in the US too, the real value of a US degree is questioned in “Ivory Tower”: At the national level, US student loan debt reached USD 1 tn in 2014, according to “Ivory Tower” (watch on Amazon Prime, runtime 90 minutes). It stood at USD 1.57 tn in 2020, and average US student loan debt as of September 2020 exceeded USD 30k. US undergraduate university tuition — which can be as high as USD 60k per year — has increased more than any other good or service in the country since 1978. “Ivory Tower” asks what a degree is worth but gives no definitive answers. Large state universities like Arizona State and private institutions like Cooper Union (which started charging tuition fees for the first time in 2014) are forced to market themselves as businesses to remain competitive, with students paying large sums for perks like luxury accommodation, but not necessarily getting a better education.

Meanwhile in Africa, a CGTN Talk Africa report poses the USD 1 mn question: how can degrees lead to better job prospects? Debates in Africa seem less focused on cost, more on employability. Despite enrollment at universities across the continent increasing by 4% annually over the last few decades, 60% of its unemployed are youth. This will spiral to 70% by 2050, a 2019 CGTN Talk Africa report (watch, runtime: 29:19). If the goal of education is to help students find work, education and industry need to be better matched, it concludes. At the policy level, better modelling of essential skills is needed. And cultural notions of degree prestige must be dropped in favor of investment in technical and vocational training — with more private-sector support for universities.