We just got our first shipment of a covid vaccine 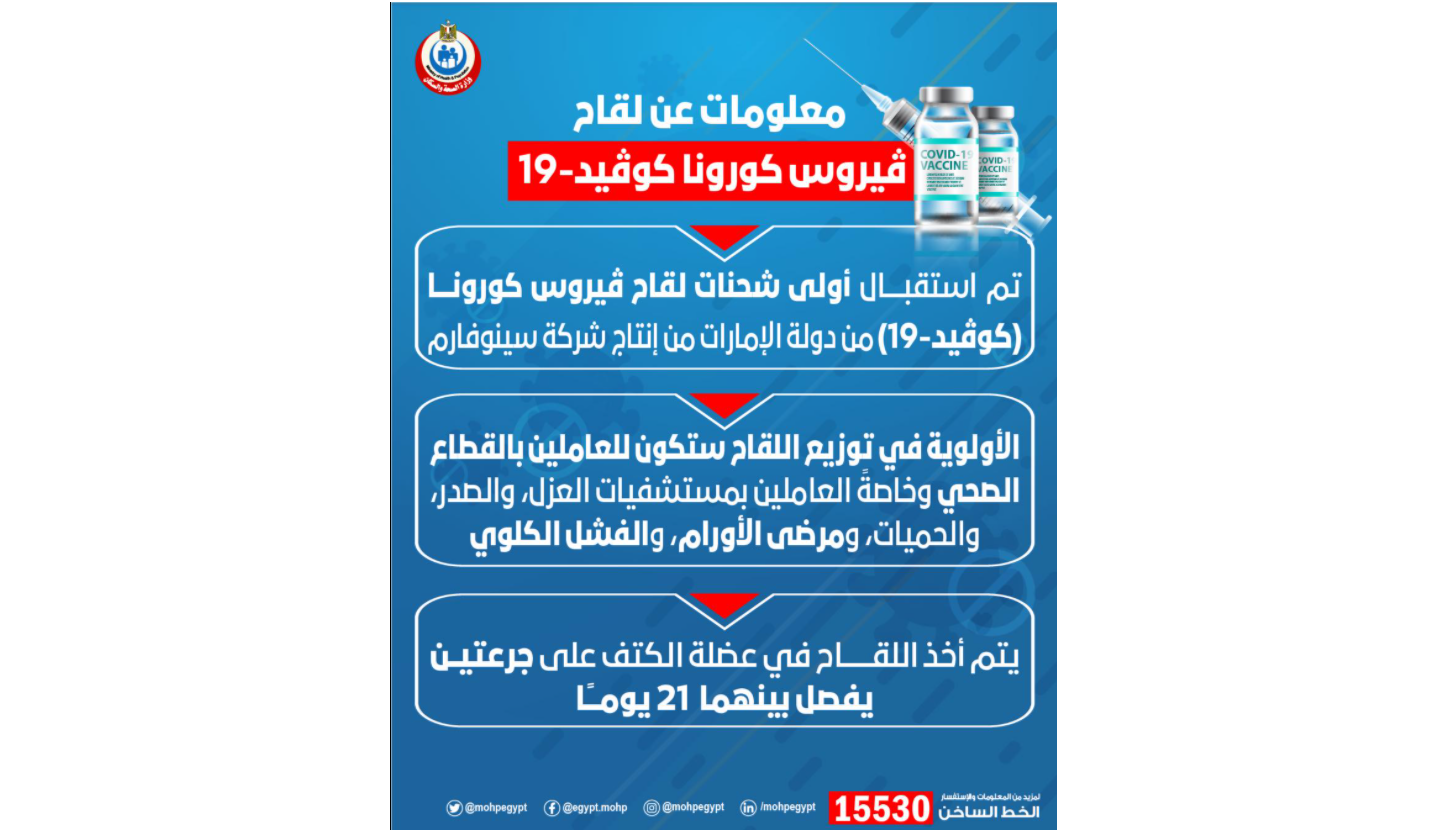 Egypt began receiving shipments of China’s Sinopharm vaccine on Thursday night by way of the UAE, Health Minister Hala Zayed announced at a presser. This is the first of several shipments that Egypt is due to receive of the Chinese vaccine, clinical trials for which showed an efficacy rate of 86%, Zayed said. Egypt and the UAE were among the nations that held clinical trials for the job, and Health Ministry scientists have signed off on the use of the vaccine. Its emergency use has been approved by the WHO, said Information Minister Osama Heikal in a statement on Friday.

Zayed herself was part of the clinical trials for the Sinopharm offering, rolling up her sleeve for the cameras to take the needle.

President Abdel Fattah El Sisi has ordered that the vaccine be distributed without charge to all Egyptians, Heikal’s statement added.

How will the vaccine be distributed? The vaccine will first be administered to frontline health workers, particularly in hospitals, isolation wards, and respiratory clinics, according to a Health Ministry statement on Friday. Next up on the priority list are those who are most at risk of severe covid symptoms, including cancer patients, and those suffering from organ failure, the statement noted. It did not give a timeline on when the vaccine will be distributed to the next tier of recipients or the wider population.

It’s a two-stage jab, just like AstraZeneca’s: The Sinopharm vaccine is administered in two jabs 21 days apart, each administered to the upper arm.

We could start making the vaccine ourselves, Zayed said in a phone-in to DMC on Friday. Financial negotiations over a production license are underway and Egypt has already established a production line for the vaccine at state-owned vaccine maker Vacsera, the minister said, with an eye to potentially exporting the vaccine to other African countries.

The government will also be launching a vaccine registration website in the coming days through which citizens can check the availability of and register for receiving the vaccine, Zayed told DMC, though no further details were provided on whether registration through the site would be mandatory or how exactly it would function.

Egypt is still lining up an arsenal of doses that includes jabs from AstraZeneca (the “Oxford” vaccine) as well as Russia’s Sputnik V.

AstraZeneca will combine its covid-19 vaccine with Russia’s Sputnik V in clinical trials that will determine whether they are more effective when mixed together, according to Bloomberg. The trials could begin before the end of the year. The AstraZeneca/Oxford University vaccine is between 62-90% effective, while Sputnik V has a reported 92% efficacy.

The news comes as the official covid-19 case count continues to rise. The Health Ministry reported 478 new covid-19 infections yesterday, up from 464 cases on Friday and 445 on Thursday. Egypt has now disclosed a total of 121,089 confirmed cases of covid-19. The ministry also reported 21 new deaths yesterday, 23 on Friday, and 22 on Thursday, bringing the country’s total death toll to 6,898.

Meanwhile, the EU will provide Egypt with an additional EUR 89 mn under the second phase of the Health Sector Policy Support Program (HSPSP) in efforts to support the country’s covid-19 response, according to an International Cooperation Ministry statement. HSPSP’s previous budget from 2010-2018 stood at EUR 110 mn to help the quality of the health services in Egypt.

Kuwait will soon resume flights with Egypt, and is coordinating with EgyptAir to announce a date in the coming days. Flights were suspended early during the pandemic.

Further afield, the US is one step closer to a vaccine rollout with the FDA granting emergency authorization for the Pfizer/BioNTech vaccine on Friday, according to Bloomberg.

Curious what the vaccine’s distribution journey across the US will look like? The WSJ has you covered with a step-by-step itinerary.