Words that should never be said again by anyone, anywhere: “We’re all in this together.” Just sayin’.

TWO THEMES are playing out today in the global policymaking circles, each relevant to those of us doing business here in Egypt.

#1- When is it time to re-open economies? To lift restrictions including curfews, store closures and the like? Some European countries are cautiously testing the waters this week with limited easing of restrictions, and the debate is hitting a fever-pitch in the United States, where the top White House trade advisor is calling scientists “tone deaf” over the covid-19 shutdown. The Donald claims to have “total” authority on when to lift lockdown orders as states there start coordinating talks on when and how to reopen their economies. French President Emmanual Macron, meanwhile, said last night that he was extending the country’s lockdown until 11 May, by which time “there would be enough masks and tests to start lifting some restrictions,” the NYT added.

Time to read only one piece? Make it this: The coronavirus economic reopening will be fragile, partial and slow in the WSJ.

#2- How long will covid-19 weaken economies and sap market sentiment? The Wall Street Journal notes that bear markets can scar investors and fund managers for years afterward, while historian Adam Tooze’s lucid piece on the economic response to the pandemic offers a compelling look a how this is hitting the three engine rooms of the global economy.

Don’t be a pledge monkey: Tempted to burnish your ESG credentials when “maximizing shareholder value” is your only real concern? The NYT guts companies that have paid dividends to shareholders, moved on with share buybacks and promised to hike CEO pay while laying off staff — all after having made big noise about signing a pledge to be better corporate citizens last fall. Read: Big business pledged gentler capitalism. It’s not happening in a pandemic. If there was ever a time to stand by your people, it is now…

Egypt now has 2,190 confirmed cases of covid-19 after the Health Ministry reported 125 new infections yesterday. The ministry also said that another five people had died from the virus, taking the death toll to 164. We now have a total of 622 cases that have tested negative for the virus after first testing positive and being isolated or hospitalized, of whom 488 have fully recovered.

Egypt’s covid case fatality rate is higher than the global average, with 7.6% of confirmed cases in Egypt resulting in death, World Health Organization Egypt representative Dr. John Jabbour said at a press conference (watch, runtime: 1:31:38). Jabbour suggested that 30% of those who died passed before being hospitalized. The WHO is studying the figure closely, he said. The current global case fatality rate looks to be about 6.2%, but scientists caution that the true figure everywhere could be significantly lower given that as many as 50% of those infected with the virus that causes covid-19 are likely asymptomatic.

Government planners think it likely the virus will rumble on in Egypt until September before being contained. Planning Minister Hala Said yesterday told reporters that models give this scenario a 50% chance of becoming reality. There is apparently a 30% chance that we will all still be talking about this come December, while a scenario that sees the outbreak brought to an end by June is the least likely to happen at 20%.

The private sector is willing to step up and start testing if asked: LSE-listed Integrated Diagnostics Holdings (IDH) is ready to begin testing for covid-19 if approval is granted by the Health Ministry, CEO Hend El Sherbini tells Forbes Middle East in an interview for the cover story of the magazine’s April issue. Cairo-headquartered IDH owns more than 400 labs across Egypt, Jordan, Sudan and Nigeria including Al Borg and Al Mokhtabar labs. It is already testing in Jordan for the virus that causes covid-19 and has disclosed measures it has in place (pdf) to keep staff and patients safe across its branch network. The Forbes piece is worth reading in full for its look at how IDH has built out a compelling business despite challenges in recent years including devaluation.

The government will announce within the next few days a schedule for repatriation flights to bring home more than 3k Egyptians stuck abroad, according to a cabinet statement. The flights will be available for citizens who traveled for tourism, work, or health reasons and have been unable to come home because of the suspension of flights.

Travel agents are working overtime to recoup deposits paid to foreign suppliers for hotel and activity reservations as well as deposits on umrah trips, according to Al Mal.

Businesses are getting a break from the Industrial Development Authority, which is giving a three-month break on payments on industrial land and fees. The IDA is also extending project completion deadlines by three months, according to the local press.

Damietta Furniture City has closed its permanent exhibition in Damietta and postponed exhibitions that were scheduled to take place in Minya (this summer) and Ras El Bar (next year), CEO Bassem Nabil told Al Mal.

The Education Ministry has launched its online teaching platform Edmodo, through which it will provide students live and pre-recorded access to virtual instruction from teachers, according to a cabinet statement. 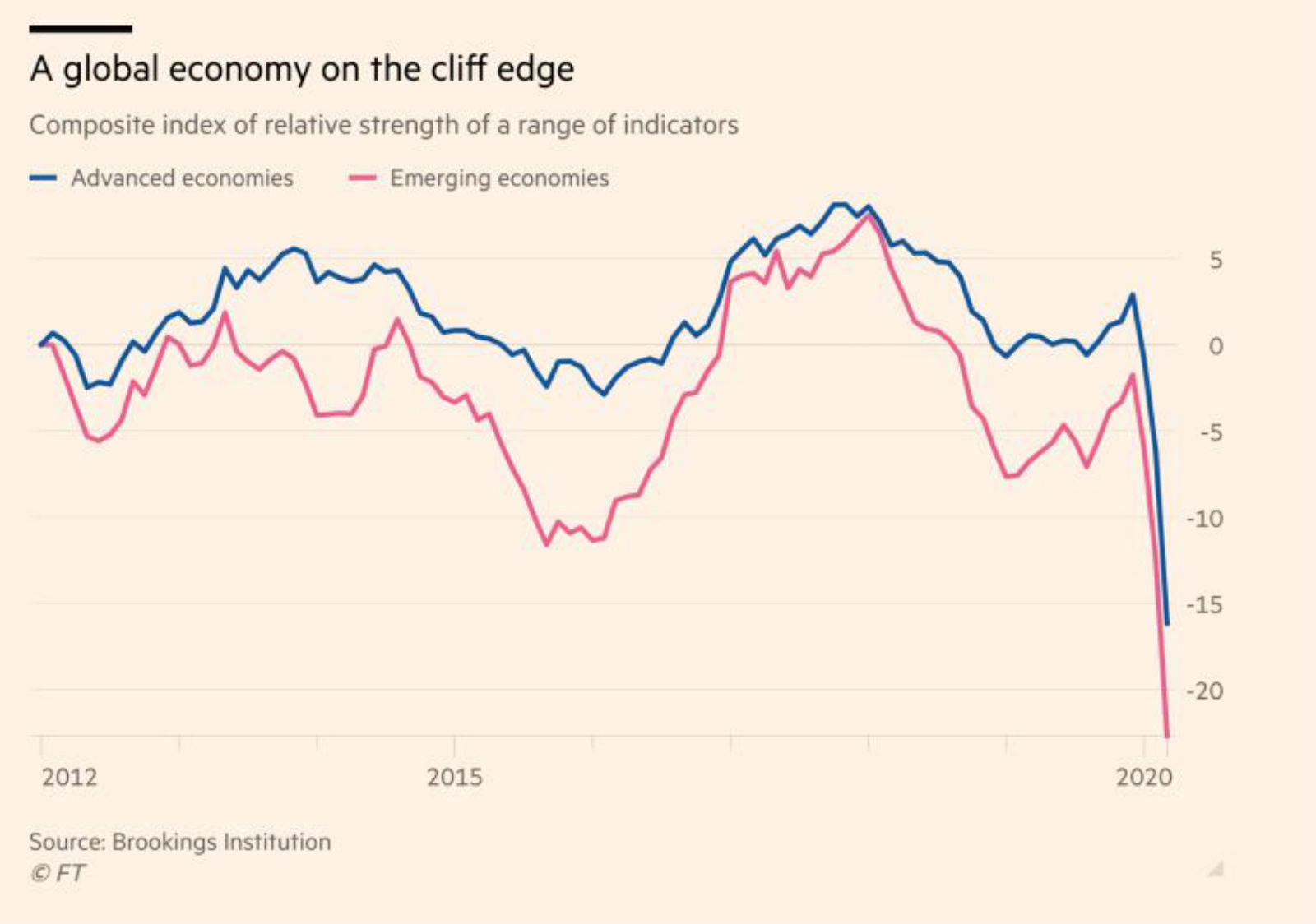 Global financial leaders will turn on their webcams this weekend for one of the most important rounds of IMF / World Bank spring meetings in history: With the global economy set for a severe contraction, a looming debt crisis in emerging markets and a historically bad earnings season ahead, whether the world is able to prevent the worst economic slump this side of the Great Depression may be decided when financial chiefs gather — virtually — for this year’s IMF and World Bank Spring Meetings on Friday.

The meetings, running through Sunday, will see the release of forecasts “showing the deepest contraction for the global economy since the 1930s Great Depression,” the Financial Times said. Three months before the pandemic, the fund had expected 160 of its 189 member countries to prosper in the coming years. Now, as many as 170 could suffer falling per capita GDP.

The world economy was probably already on the brink of recession before the crisis intensified: The Brookings-FT Tiger index has revealed “historically large” declines in major fiscal indicators and economic and confidence indicators around the world in March, a month when the covid-19 pandemic was still far from peaking, the FT says. What’s even more worrisome is the index is in line with other indicators, “which increasingly point to the most difficult moment for the global economy in almost a century.”

The fate of emerging economies hangs in the balance: The G20 will finalize a 6-9 month moratorium on debt repayments for developing countries at the meetings in an effort to prevent a wave of sovereign defaults, the FT reported a G20 official as saying.

“It’s a make or break moment,” said former IMF chief economist Maury Obstfeld, who warns of rampant contagion and “biblical” levels of migration from developing countries if the G20 fails to cooperate.

The terrible, horrible, no good, very bad earnings season gets underway in America today. PMorgan, Wells Fargo and Johnson & Johnson will all report first quarter earnings today, with Citi, Bank of America, Goldman and UnitedHealth following on Wednesday. Japan’s Softbank now says it expects to turn in a loss of nearly USD 12.5 bn after its Saudi-backed tech-focused Vision Fund recorded a JPY 1.8 tn (USD 16.7 bn) investment loss due to “the deteriorating market environment,” it said in a statement yesterday, according to Reuters.

US equity prices are unlikely to fall below last months’ lows due to the extraordinary policy support provided by the US Federal Reserve, Goldman Sachs said in a research note cited by Bloomberg. Markets will only hit new lows if the US witnesses another surge in new infections, Goldman strategists wrote yesterday.

Executives could be on track to benefit disproportionately from long-term incentive plans put in place during the recent market crash, the Financial Times reports. These measures often involve awarding executives a basic salary converted into shares in place of pay cuts. But the slump in stock prices could see executives receiving huge numbers of shares for their salaries, putting them on course for windfalls when the market rebounds.

Private equity firms are rushing to protect investments in areas seen as particularly vulnerable as buyout volumes plummet, the Wall Street Journal reports. Firms are pumping more capital into at-risk healthcare, leisure and entertainment companies to keep them afloat and instructing them to free up cash as hopes for profitable sales dwindle.

The global telecom industry could see revenue losses of USD 25 bn this year, as covid-19 continues to curb international travel and with it the need for roaming — where mobile phone users incur extra charges when they connect to overseas networks abroad — the Financial Times reports.