EMs have done better than European countries to contain covid-19, but will struggle to finance lockdowns -RenCap 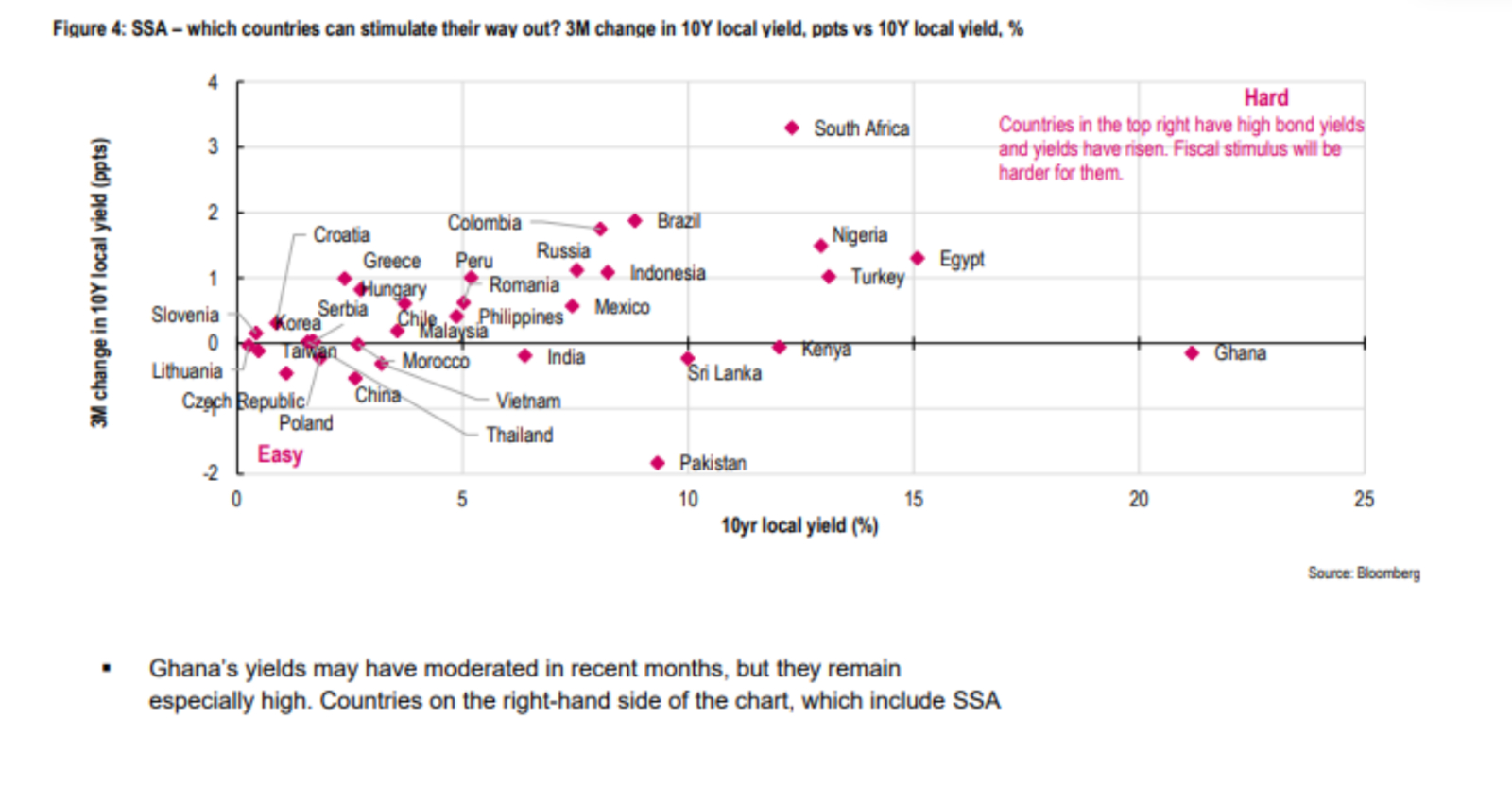 EM governments — including Egypt, Turkey, Russia, and South Africa — enacted effective policies including lockdowns faster than their European counterparts, as can be seen in the number of cases per 100k people once the policies went into effect (5 per 100k in Italy and the UK vs. less than 0.01 per 100k in Hubei). Europe is expected to see more deaths per capita by the end of the outbreak, but EMs are likely to keep their death rates from the virus at around the same level as Hubei, says Global Chief Economist Charles Robertson.

The flattening of the curve in Italy on the back of strict measures enacted by the government is “encouraging” and indicates that social distancing and lockdowns do work in curbing the spread of covid-19. Based on the “fairly straightforward” progression of the virus’ spread, the US is expected to see its new cases peak next month.

Bond yields in EMs, which have been rising after already being high, beg the question of how these countries will be able to afford the lockdowns they’re imposing. RenCap flags Pakistan, Turkey, South Africa, Nigeria and Egypt, along with much of Latin America as being in the “not looking so hot corner” when it comes to yields. “Those countries that will likely struggle could and should seek cheaper funding from the IMF and World Bank or look for a G7 or G20 package if there’s one available,” says Daniel Salter, head of equity strategy. Finance Minister Mohamed Maait had told us earlier this week that the government could look at a fresh IMF facility — which Egypt had previously ruled out — to finance state spending in light of the “extenuating circumstances” created by the covid-19 outbreak.

The magnitude of outflows from EM equity funds has been relatively small, but this is the “fastest bear market” we’ve seen so far, according to Salter. The numbers might seem painful in terms of volume but the reality is that this only actually accounts for around 1.1% of EM assets under management.

Is the worst yet to come? This relatively low percentage suggests one of two things, Salter says: Either EMs have already taken so many consecutive blows over the past few years that resulted in heavy outflows so that there just isn’t much fat left to trim — or we still have the worst of the sell-off ahead of us.

The good news: EM currencies (minus China’s yuan) are at the cheapest they’ve been since 1998, meaning it’s a great chance to invest right now. Aside from Turkey, which was already facing currency pressure pre-covid-19, Latin American currencies have taken the biggest beating so far, with each of Columbia, Brazil, and Peru seeing their currencies drop 25%. Mexico’s peso has lost more than 30% of its value, and Russia’s RBL is down 10% mostly because of the oil price war. Frontier markets, on the other hand, have not seen currencies get cheaper as many are pegged. There have so far been very few redemptions in frontier markets because they have been “an unloved asset class” for the past couple of years, Robertson says.