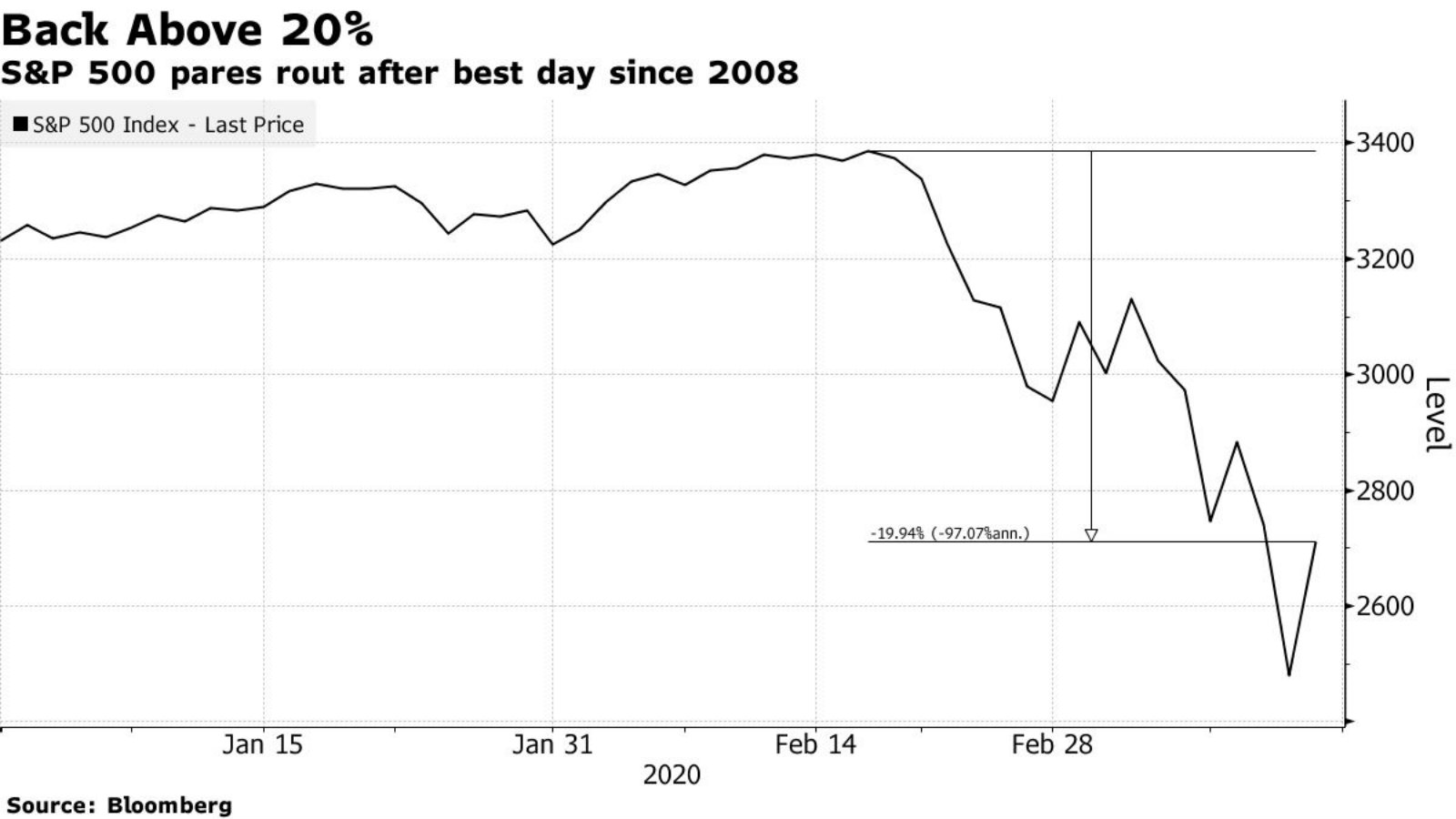 Global equities cap wild week of trading with late Friday surge on stimulus hopes: Global stocks surged on the final day of trading last week on hopes that world leaders would step in with fiscal support for businesses threatened by the covid-19 outbreak. President Donald Trump declared a national state of emergency that unlocks USD 50 bn in federal funds, helping the S&P 500 to see its best day’s trading since 2008, finishing 9.3% in the green. The other major US indices, the Dow Jones and Nasdaq, also ended the day up almost 9.4%.

Just a day before, US and European equities had posted their biggest single-day drop since Black Monday in 1987, reeling from Trump’s decision to suspend air travel between the US and Europe and ECB President Christine Lagarde’s botched press conference following the central bank’s interest rate meeting. The Federal Reserve was forced to inject USD 1.5 tn in emergency liquidity into the financial system as US markets collapsed more than 9% in response to the travel ban. And in Europe, Lagarde’s suggestion that the central bank wouldn’t provide support to the bond market caused Spanish and Italian yields to spike and helped indices across the continent to close more than 10% in the red, with the Italian exchange down almost 17%. It was a “catastrophic failure,” in the words of one European economist.

The one-day comeback is barely a relief for Wall Street, which saw its second-worst week in a decade following a manic Monday-Thursday selloff, along with many other markets around the world. “The slide into a bear market has been the fastest since World War II,” says the AP. The S&P 500 fell over 20% last week and the Dow nearly 15% before recouping some of the losses on Friday.

Oil prices also took a breather, with Brent up 5.27% on the day and US crude gaining 4.54%. Trump pledged that the US will begin filling up its strategic reserves to take advantage of historically low prices. Oil prices were battered last week after Saudi Arabia announced it would flood the market with ultra-cheap crude in response to the collapse of talks with Russia to agree new supply cuts.

This seems to at least indicate that “we’re definitely taking steps in the right direction,” Boston-based State Street Global Advisors chief investment strategist Michael Arone was quoted as saying by Reuters. However, volatility and a lack of liquidity are expected to remain high, Chicago’s Piper Sandler analyst Justin Hoogendoorn says.

China steps up stimulus with USD 79 bn plan: The People’s Bank of China’s decided late on Friday to slash the reserve requirement for commercial banks, allowing USD 79 bn in funds to flow to local companies, the Financial Times reports. This measure was announced on the same day other central banks in the Asia-Pacific “looked to shore up [their] crisis-hit markets and economies.” Meanwhile, the Bank of Japan purchased USD bns-worth of bonds and the Reserve Bank of Australia boosted financial market liquidity by USD 5.6 bn.

While global equities were hammered on Thursday, the EGX (quite literally) weathered the storm. The exchange was closed as Cairo’s streets were hit with heavy rain.