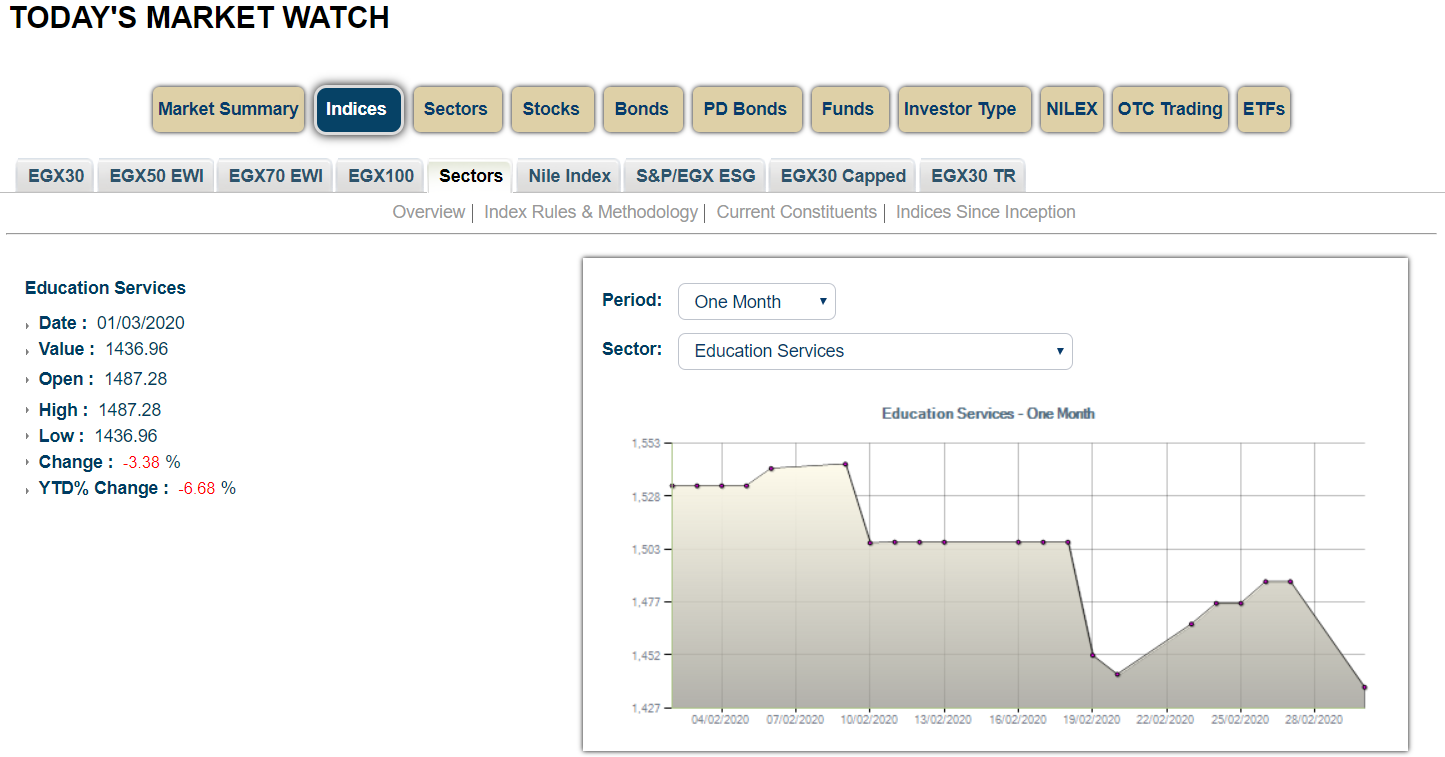 Education proves its strength as a defensive sector in the midst of corona market meltdown: The EGX30 closed down 6% on Sunday as investors reacted to the accelerating sell-off in global markets at the tail-end of last week and a spate of new covid-19 cases — including four people who had recently travelled to Egypt. (Speculation is that all four were carriers of the virus who tested positive after the visit, not that they contracted the infection here.)

Turnover dropped on Sunday to EGP 598 mn, 2% above the 90-day average, from EGP 988 mn on Thursday (or about 69% above the trailing 90-day average). All sectors were impacted, including traditional high performers banking and telecoms. Education was no different, but sector stocks fell only an aggregate 3.4% at the close of trading yesterday, or about half of the dip of the general market.

Education shares are doing well because the business itself is defensive, says Pharos Holding’s head of research Radwa El Swaify, noting, “We saw this in early 2011, when schools were shut down [after the events of 25 January]. Parents continued to pay tuition, even when schools were closed, and we expect it to happen here.”

A lesson from CIRA management: Open clear lines of communication with investors. CIRA shares have performed well despite the covid-19 selloff because the company has a history of “over delivering” to the market since its 2018 IPO, said CEO Mohamed El Kalla, noting that management has clearly communicated the company’s growth strategy and milestones to investors. Putting in the work during good times kept CIRA’s stock stable during tough market conditions, he suggested, adding that CIRA’s schools and colleges have enacted measures to guard against potential spreading of the covid-19 virus and that it has plans in place should the rate of infections get worse.

That contingency planning is key. GEMS Egypt CEO Ahmed Wahby, like El Kalla, noted that safety is the first priority for any schools operator. Schools shouldn’t take risks, he said, and need to create awareness among parents, students and faculty of their plans to handle any crisis. Wahby suggests that some schools will entrench their defensive position by having in place the tools they need to deliver education in the event schools are ordered to shut down. GEMS, he notes, has its own tech platform that it can use should the need arise.

So how defensive is education right now? Let’s look at EGX data from Sunday. Education stocks on the EGX, which include CIRA (Mavericks and Futures in K-12 and Badr University) and Suez Canal Company for Technology Settling (the owners of Sixth of October University) collectively saw a drop of 3.38%. CIRA, an EGX30 constituent, saw no drop in its EGP 13.50 share price while the lightly traded Suez Canal Company, which has been mired in legal disputes over ownership of Sixth of October University, saw its share price fall 24%. Education still beat traditional strong market performers, including banks (which fell 3.94%) and telecoms (which fell 4.37%). The only other sectors to have performed as well or better were food, beverages and tobacco (-3.37%) and trade and distribution stocks (-2.42%).

That’s consistent with education’s performance year-to-date and since the so-far only novel coronavirus case was reported in Egypt. Education is down 6.7% year-to-date, better than the EGX30 (-12.5%) and just behind telecoms, banking, and trade and distribution. And in the month of February, when covid-19 first hit our shores, education dipped only 3%, according to a research note by Shuaa Capital out yesterday. That put education in the same top-performers basket as healthcare (another defensive sector), banks, telecoms, trade and distribution, and textiles.

The question is whether education can hold its ground as a defensive play, and the answer lies in how the sector operates in the event that there is community-level transmission of covid-19 in Egypt, and that’s where the contingency plans El Kalla and Wahby discussed will ultimately pay off — or not.