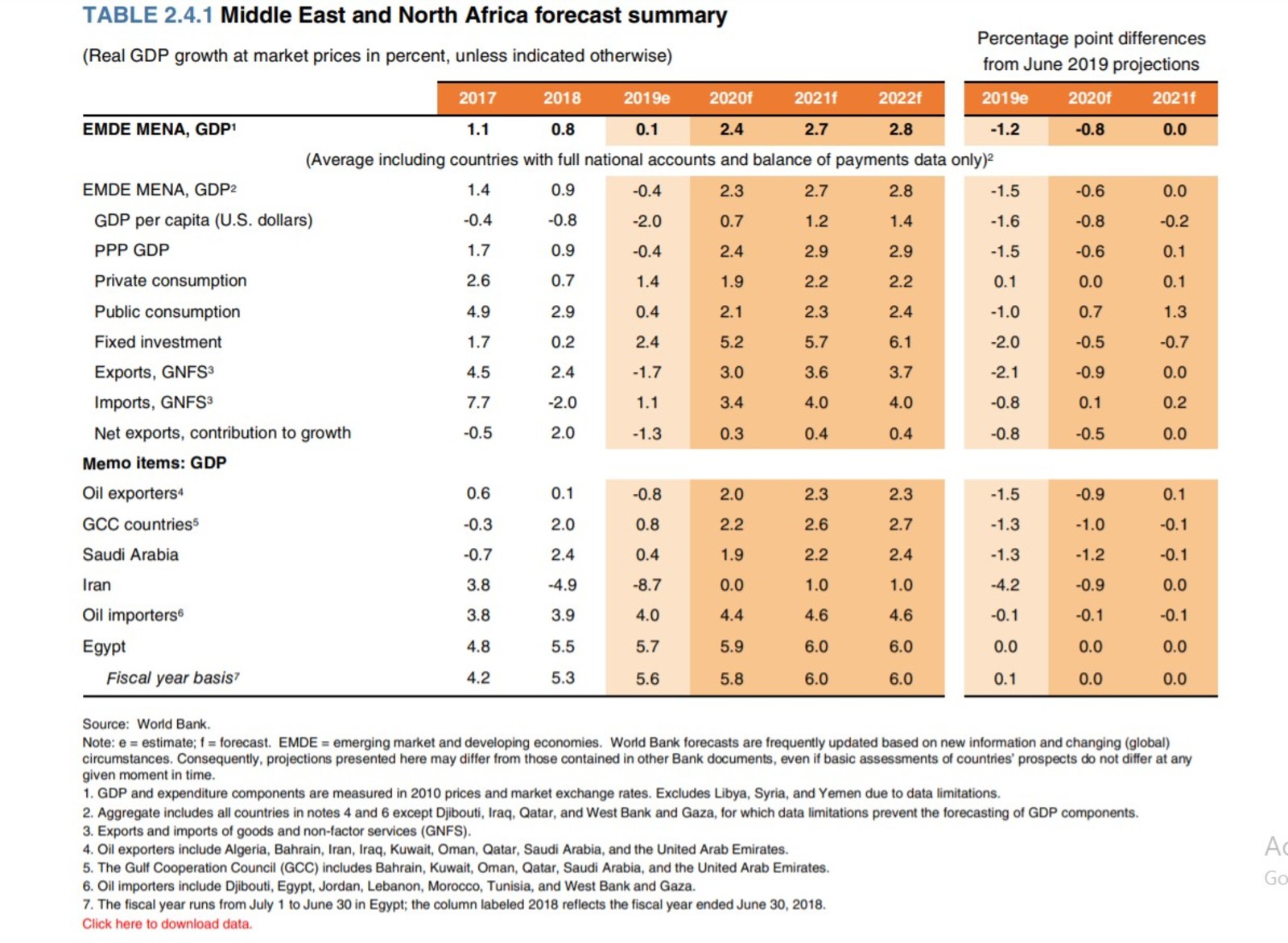 Egypt’s economy to grow 5.9% this year -World Bank: Egypt’s economy is expected to grow at a 5.9% clip in FY2020-2021, with the growth rate set to accelerate to 6% in FY2021-2022 and remain at that level throughout the following fiscal year, according to the World Bank’s Global Economic Prospects 2020 report released last week. With Egypt’s economy not heavily dependent on oil revenues, it has benefited from more stable growth than oil exporting countries in the region, according to the report. Economic growth has been fueled by an increase in exports and investment (both of which were facilitated by a “more accommodative” monetary stance, leading to a more stable EGP), the shifting of external debt maturity towards long-term instruments, and increased activity in the tourism sector. Flows into Egyptian equities and investor risk appetite have also been driven by developed market monetary easing, the report says.

Macro reforms get a nod: Egypt’s currency devaluation, energy subsidy and business climate reforms are all hailed as positive steps that have raised investor confidence and increased export and investment prospects, the report says. The Bankruptcy Act and new minority investor protection regulation are also cited as important measures, the former for facilitating debt resolution between creditors and debtors, and the latter for spurring investor confidence by requiring shareholder approval in issuing new shares.

Labor productivity growth is a key challenge for MENA: Although MENA has the highest productivity level of any emerging market region, its productivity growth rate has been the weakest, averaging 0.3% between 2013-18 — well below the EM average. This is largely because of wide regional variation, with GCC economies displaying significantly higher productivity levels than energy importers such as Egypt. Productivity growth in Egypt has primarily been driven by “within-sector productivity gains,” the report says. The report stresses the need to develop the private sector across all MENA economies to reverse this trend, which would require loosening restrictions on the business climate and building human capital. The report also recommends more investment in renewable energy through public-private partnerships, among other things.

Emerging market growth as a whole remains muted: EM growth is projected to pick up to 4.1% in FY2020-2021 — 0.5% below previous forecasts — and stabilize at 4.4% in FY2021-2022, “with the pace of the recovery restrained by soft global demand and structural constraints, including subdued productivity growth,” the report says. The report also puts global growth in 2019 at 2.4% and is forecasting 2.5% for this year.

You can read the full report here (pdf) or check the press release here.