It’s a reasonably quiet morning on the business / finance / econ news front in Egypt. The three big news drivers of the day:

#1- Talk of a cabinet shuffle is still in the air — or on the airwaves, if you prefer, a day after state newspaper boss Yasser Rizk brought up the notion on a certain talk show. Lamees El Hadidy picked up the topic last night on her show, adding impetus to the notion that something may be in the works. We have chapter and verse in this morning’s roundup of Last Night’s Talk Shows, below.

#2- The finance community is getting its head around Aramco having pulled the plug on foreign marketing of its IPO — an offering that had prompted many would-be issuers to hold back from late-in-the-year capital raising activities. Saudi Aramco has cancelled plans to take its IPO roadshow outside of the Gulf as foreign appetite falls far short of expectations, sources close to the matter told the Financial Times. The Saudi oil giant is reportedly no longer holding meetings with European investors and has canceled planned roadshows in the US, Asia and, finally, London. The book-building process — which is “all local now” — is expected to continue until 4 December, with the stock to price the following day.

Localizing the IPO means the government will have more influence over the company than if western investors were involved, Bloomberg says in a recap of the obvious.

The Aramco IPO visualized: Bloomberg is out with five charts that put the IPO into perspective. 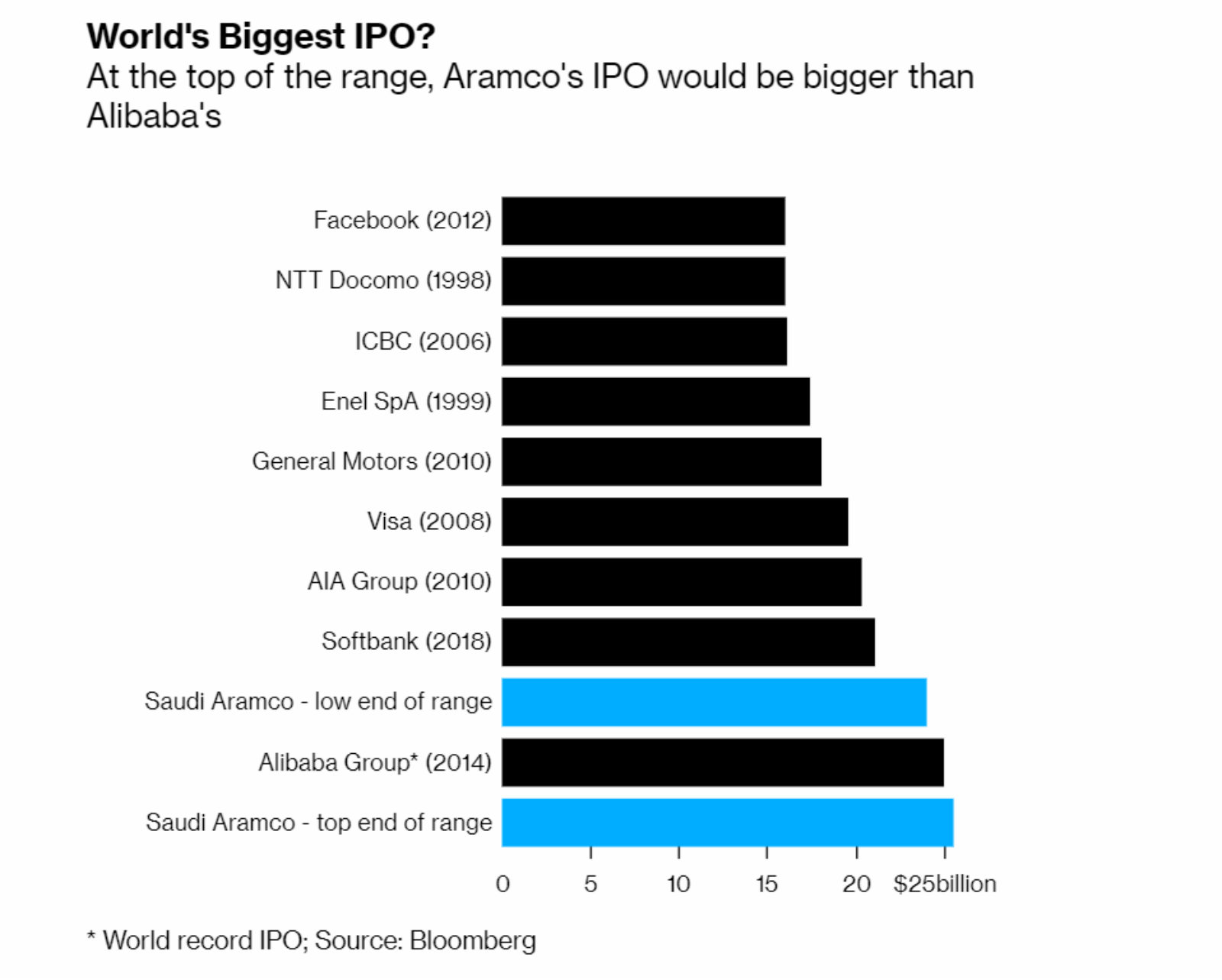 #3- President Abdel Fattah El Sisi kicked off his trip to Berlin yesterday with a flurry of meetings with political and business figures alike. The president is in the German capital for the G20 Compact with Africa conference, which kicks off today, . El Sisi will represent the African Union during the event, which will also see Egypt’s Investment Ministry sign a EUR 154 mn loan to support renewable energy, water management, waste recycling, and technical education. Look for the visit to dominate the airwaves and the front pages of many newspapers today and tomorrow.

*** We also have a wide selection of industry news worth a skim this morning, with everything from infrastructure tender updates to the latest on short selling.

We should get a better idea tomorrow of whether to price in more rate cuts in the US of A this year: The US Fed’s minutes from its October meeting are set to be released tomorrow, and the market will be on the lookout for confirmation on whether the central bank is pausing its easing cycle, the Financial Times says. Fed Chairman Jay Powell indicated at the post-meeting presser last month that the so-called “mid-cycle adjustment” was now at an end, meaning that the bank was unlikely to make a fourth cut this year at its meeting, scheduled for next month.

Fed policy will stay “non-political,” Powell tells Trump: Fed Chairman Jay Powell told President Donald Trump that the Federal Reserve’s monetary policy will remain “non-political” despite the president’s constant public criticism of the central bank. Trump adopted a marked change of tone after the meeting, describing the encounter as “very good and cordial.” A Fed statement said that Powell’s comments “were consistent with his remarks at his congressional hearings last week,” and that they didn’t talk about his expectations for monetary policy going forward.

The trade of goods around the world has lagged over the past few months — and y-o-y growth is declining, according to the World Trade Organization’s (WTO) Goods Trade Barometer (pdf), which gauges momentum in global trade. The barometer reading for September came in at 96.6, a slight improvement from the previous 95.7 reading, but still short of the 100 that would indicate growth is in line with medium-term trends.

Which goods are particularly weak? Trade is lagging most in electronic components, raw materials, and air freight, data shows.

It’s not all bad news: The barometer for export orders, automotive products, and container shipping “have firmed up” to enter on-trend growth territory.

Going forward: “The latest barometer reading suggests that goods trade will likely remain below trend in the third quarter and into the fourth quarter,” the WTO says.

Among the international headlines you should know about this morning: 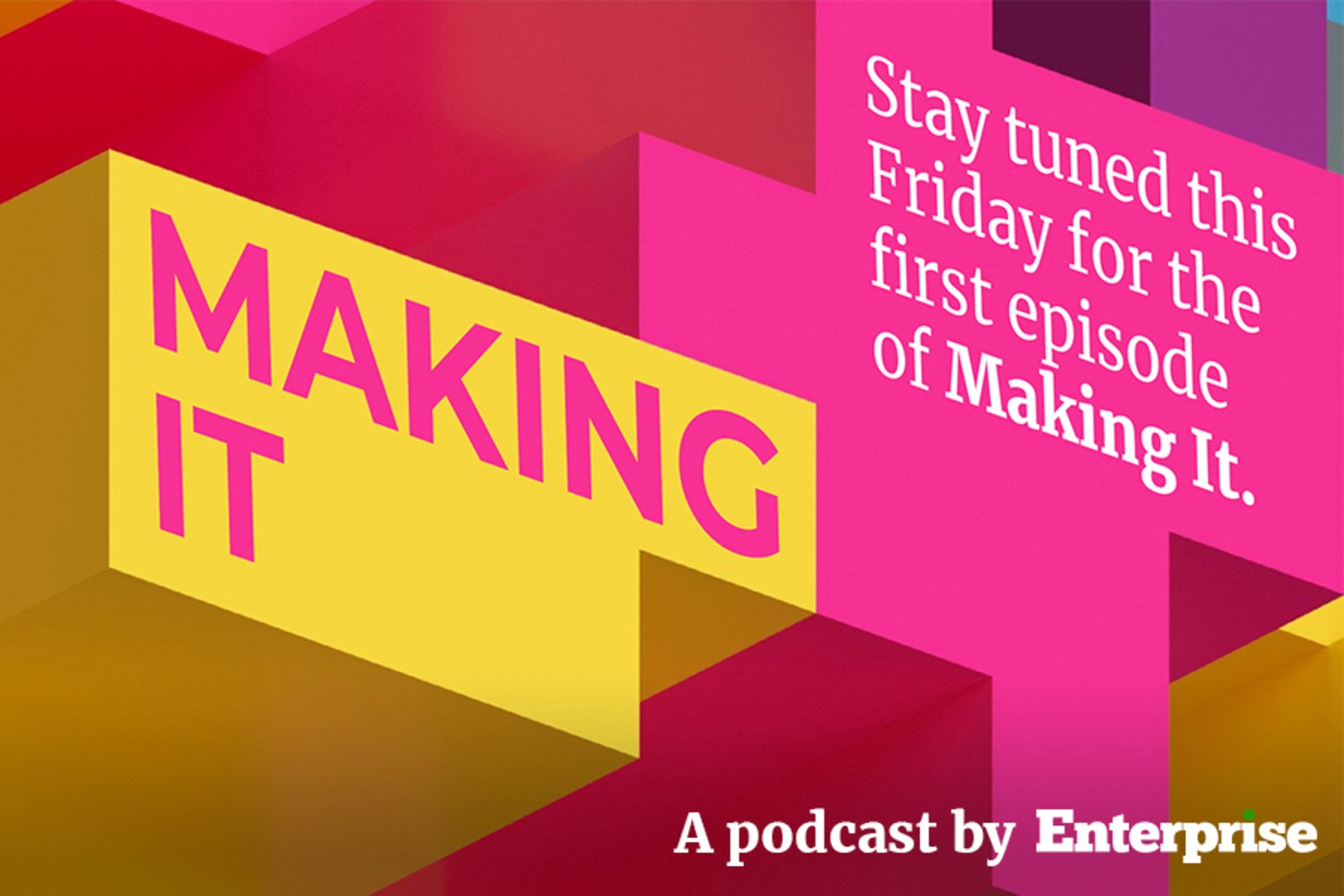 Our first podcast, Making It, is launching this Friday. Get ready for the first episode, featuring a CEO whose business you may well pass by every day — and that has always had your stomach’s best interests at heart.

Want a sneak peek? Listen to our trailer here (listen, runtime: 2:02). You can also subscribe now on Apple Podcast.