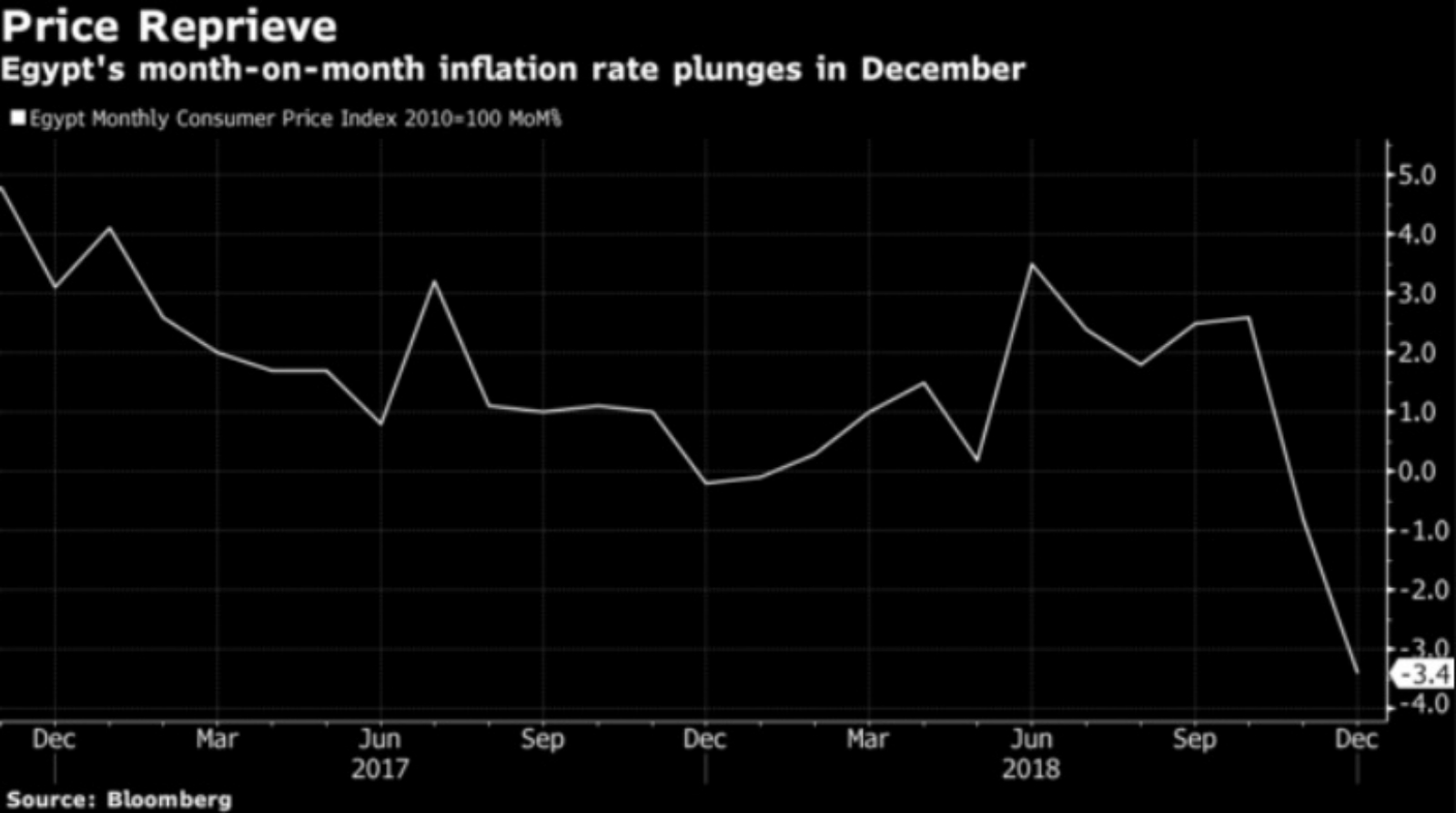 Inflation drops in December, falling within CBE’s year-end targets: Annual headline inflation dropped to 12.0% in December, down from 15.7% the previous month, according to a statement from the central bank (pdf). Monthly headline inflation also dropped to -3.2%, down from -0.8% in November. Annual core inflation, meanwhile, which doesn’t include volatile goods such as food, rose to 8.3% in December from 7.9% “due to an unfavorable base effect,” the CBE said, despite month-on-month inflation in fruit and vegetable prices falling 19.5%. The CBE had previously said it expects inflation to come in at c.13% in 4Q2018 before dropping to the single digits over the course of this year “after the temporary effect of fiscal supply shock dissipates.”

The drop in inflation could bode well for interest rates: “With headline inflation now 5.25 percentage points below the 17.25 percent benchmark — and assuming that underlying factors such as oil prices remain under control — the central bank may cut interest rates by 100 basis points at its March 28 meeting,” Naeem Holding said, according to Bloomberg. CI Capital’s Hany Farahat agrees the CBE could cut rates during 1H2019, but other analysts say it is “too early to tell” whether declining inflation will lead the CBE to resume its monetary easing cycle, Reuters adds.

No impact from hike in FX rate for customs on non-essential imports: The government’s recent decision to scrap the discounted customs exchange rate for non-essential imports had been expected to send inflation up by as much as 1 ppt, but has yet to register on inflation. That suggests the next few months may see “an interim upside,” Naeem says.

Still, we haven’t seen the end of inflation: The government is about to test letting gasoline prices float +/- 10% in tandem with global oil prices. It will pilot the pricing mechanism with 95 octane fuel (which constitutes a tiny fraction of the total market) as early as 2Q2019 and could then extend the test to other grades when it next cuts energy subsidies for its 2019-20 budget cycle.