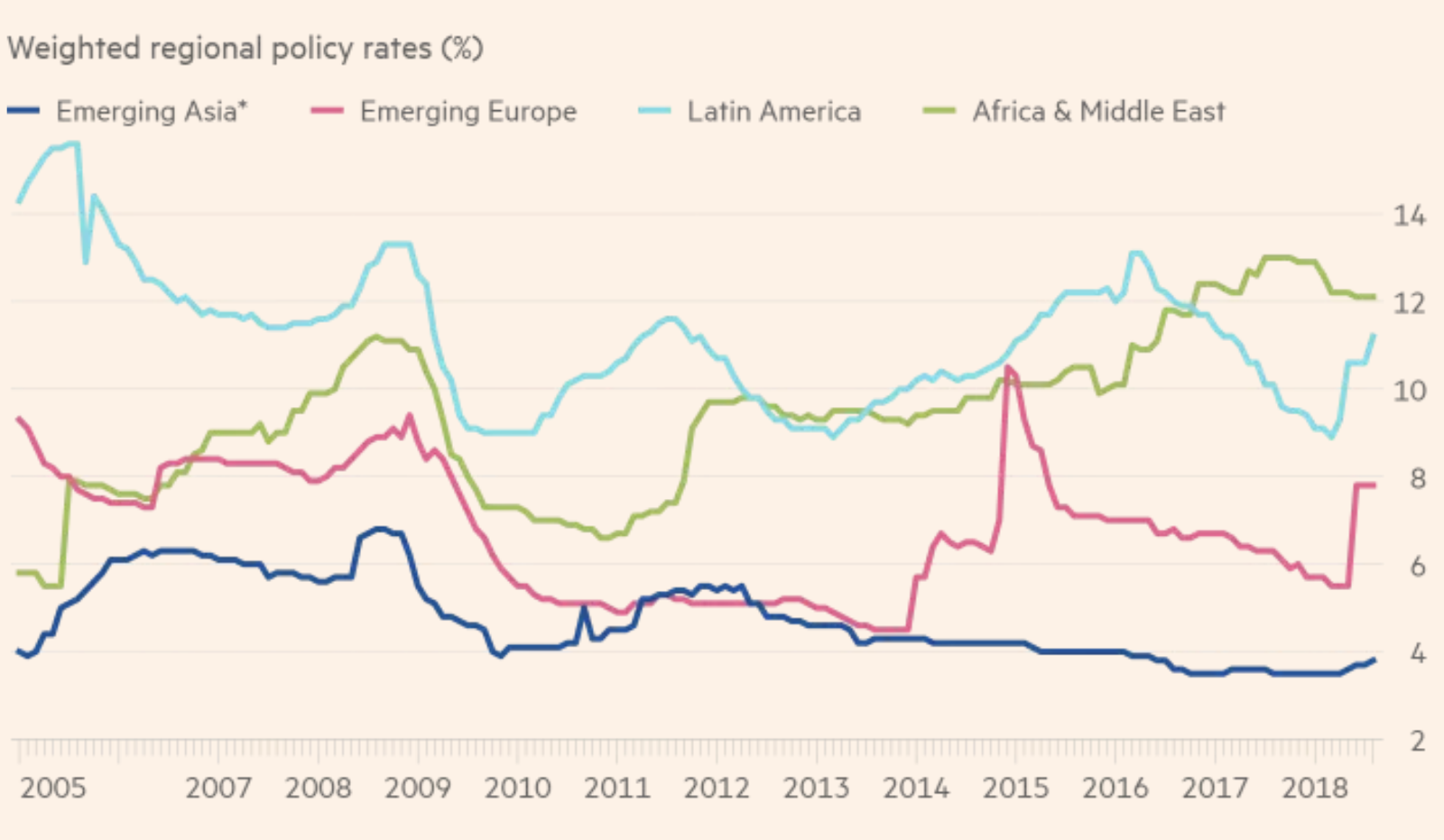 **#3 High interest rates are the price we will have to pay to stay competitive to the carry trade. Emerging markets are in their first “sustained” rate-hike cycle since 2011. Rates are rising in EM from Turkey and Argentina to India, Indonesia, the Philippines and the Czech Republic, and the upshot is that we’re going to face competition for allocations from the carry trade. Think of it as the global arms race of EM monetary policy.

The others are catching up to us: An index maintained by Capital Economics and picked up by the Financial Times notes that an index of “the number of emerging market central banks raising rates minus the number cutting them has risen to is highest level since 2011, when the world was still recovering from the most acute phase of the global financial crisis.” MENA has had the highest policy rates globally for the past couple of years, but as a Capital Economics chart shows (above), the gap between us, Latin America and emerging Europe has narrowed.

Egypt’s new Catch 22: Paying more to keep capital here strangles private-sector borrowing and raises costs to the state treasury. Egypt led EM with a substantial rate hike after the float of the EGP — arguing the IMF orthodoxy that raising rates was necessary to help curb inflation. It also ensured we were attractive to hot money, which came pouring in to help rebuild reserves and ease pressure on the EGP. We’ve been saying for the past month that with the EM sell-off continuing, policymakers now have a new Catch 22: Fund managers are pulling out of emerging markets, spooked (a) by the risks about which we drone on every morning in this space and (b) motivated by a strengthening USD and the prospect of rate hikes in the United States. As other countries raise rates, Egypt’s central bank will have to (at a minimum) leave interest rates on hold to keep the carry trade from fleeing Egypt. Toss in the risk of depreciation of the EGP (as Turkey, South Africa and other major EM are seeing) and we see the central bank leaving rates unchanged when it next meets at the end of the month.

This is (at best) mediocre news for the private sector and possibly for FDI, where we have long argued that high interest rates discourage investment by domestic businesses — a key catalyst to help unlock foreign direct investment. And high policy rates will also continue to keep borrowing costs high for the good folks at the Finance Ministry, with all that that entails (in the near-to-medium term) for government finances.