Inflation rose in May at its slowest pace in two years 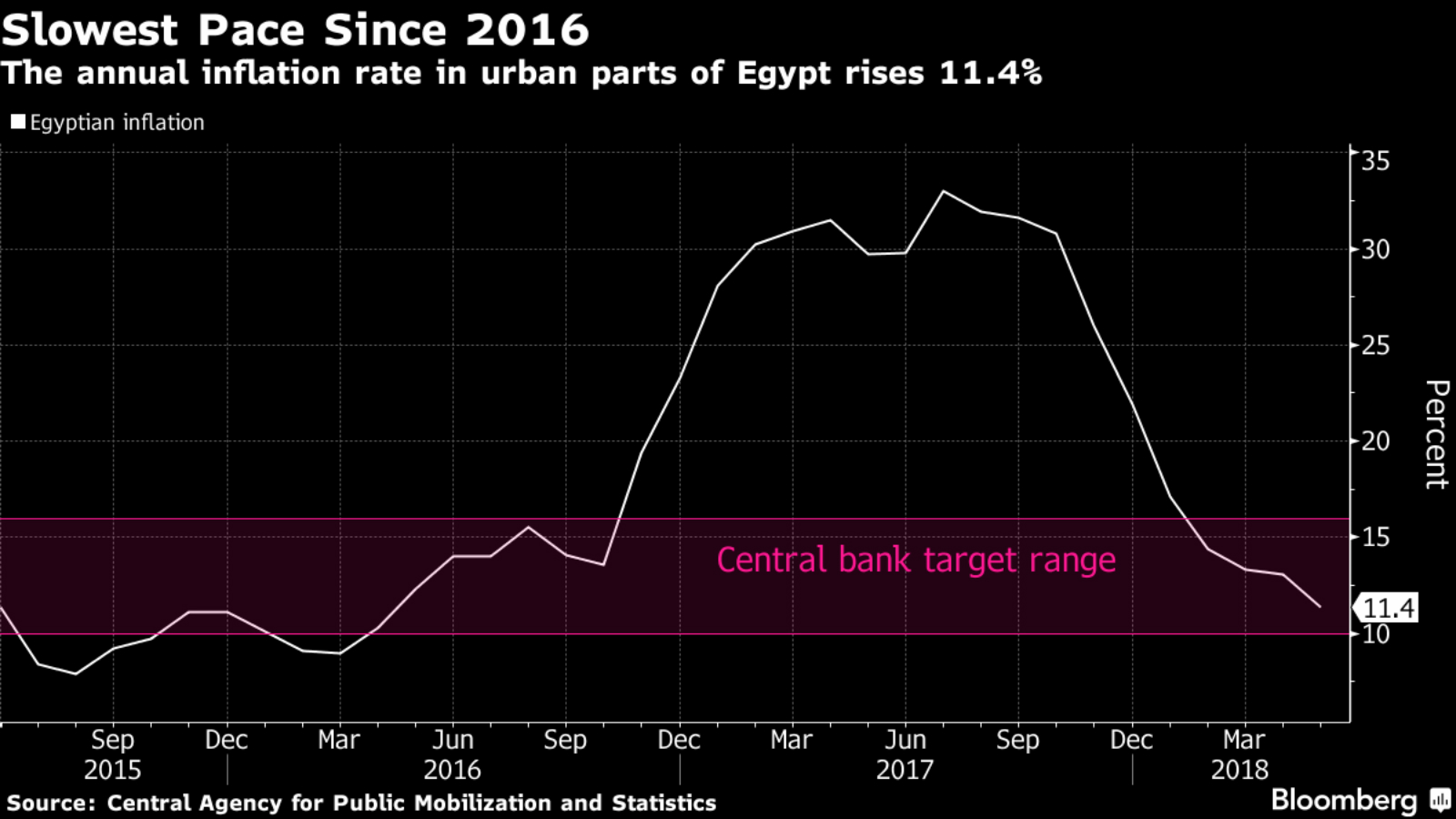 Inflation rose in May at its slowest pace in two years: Annual headline inflation rate cooled to 11.4% in May from 13.1% in April, according to data from state statistics agency CAPMAS released on Sunday. That rate (the slowest rise in two years) beat the central bank’s inflation target, hitting the bottom of its range of 13% (+/- 3%). Monthly headline inflation fell to 0.2% last month from 1.5% in April. Annual core inflation — the CBE’s preferred gauge, which strips away volatile items such as food — was down to 11.1% in May from 11.6% in April. On a monthly basis, core inflation was 1.5% in May from 1.1% in April, the CBE said yesterday (pdf).

Figures beat expectation: “Assuming that the numbers are accurate, this is certainly an unexpectedly good development in terms of incoming macroeconomic data,” Naeem Brokerage head of research Allen Sandeep tells Reuters. Crucially, it “comes as a contrasting development versus other emerging economies witnessing a steady rise in inflation,” he added.

The drop in May came despite a 46.5% increase in water prices and the threefold increase in Metro ticket prices. All eyes now turn to the CBE’s monetary policy committee meeting at the end of the month.

Just remember: It’s coming off a really high base effect, with inflation having started to peak in May of last year following the late 2016 float of the EGP before starting to show signs of cooling in August.

May inflation figures give the central bank breathing room to absorb the shock of upcoming fuel subsidy cuts, EFG Hermes’ Mohamed Abu Basha wrote in a note to clients yesterday, saying the “inflation outcome expands the margin of real positive rates by 1.8pp to 5.9%, leaving CBE with a comfortable buffer ahead of the upcoming fuel price hikes. As such, we do not see a need for CBE to react to the fuel price hike, especially with inflation likely to be within its target of 13% +/-3%.” Abu Basha sees the CBE leaving rates on hold at least until 4Q18 “to: i) ensure the subsidy cuts do not have any surprising second-round effects; and ii) seek better visibility on global oil prices.” In a note yesterday, Beltone Financial said it sees inflation rising a further 3-5% in 3Q2018 on the back of a 35-45% increase in fuel prices, which could come as soon as next month.

Meanwhile, Pharos Research head Radwa El Swaify sees headline inflation averaging 13-4% in 3Q2018, with monthly core inflation surging to 3.5% in July as a result of higher fuel prices. She sees that figure dropping to 2% in August then 1.5% in September, she tells Al Mal. “Inflation may have moderated, but the rate could accelerate again if the government goes ahead with another round of fuel subsidy cuts,” writes Bloomberg Tarek El Tablawy.