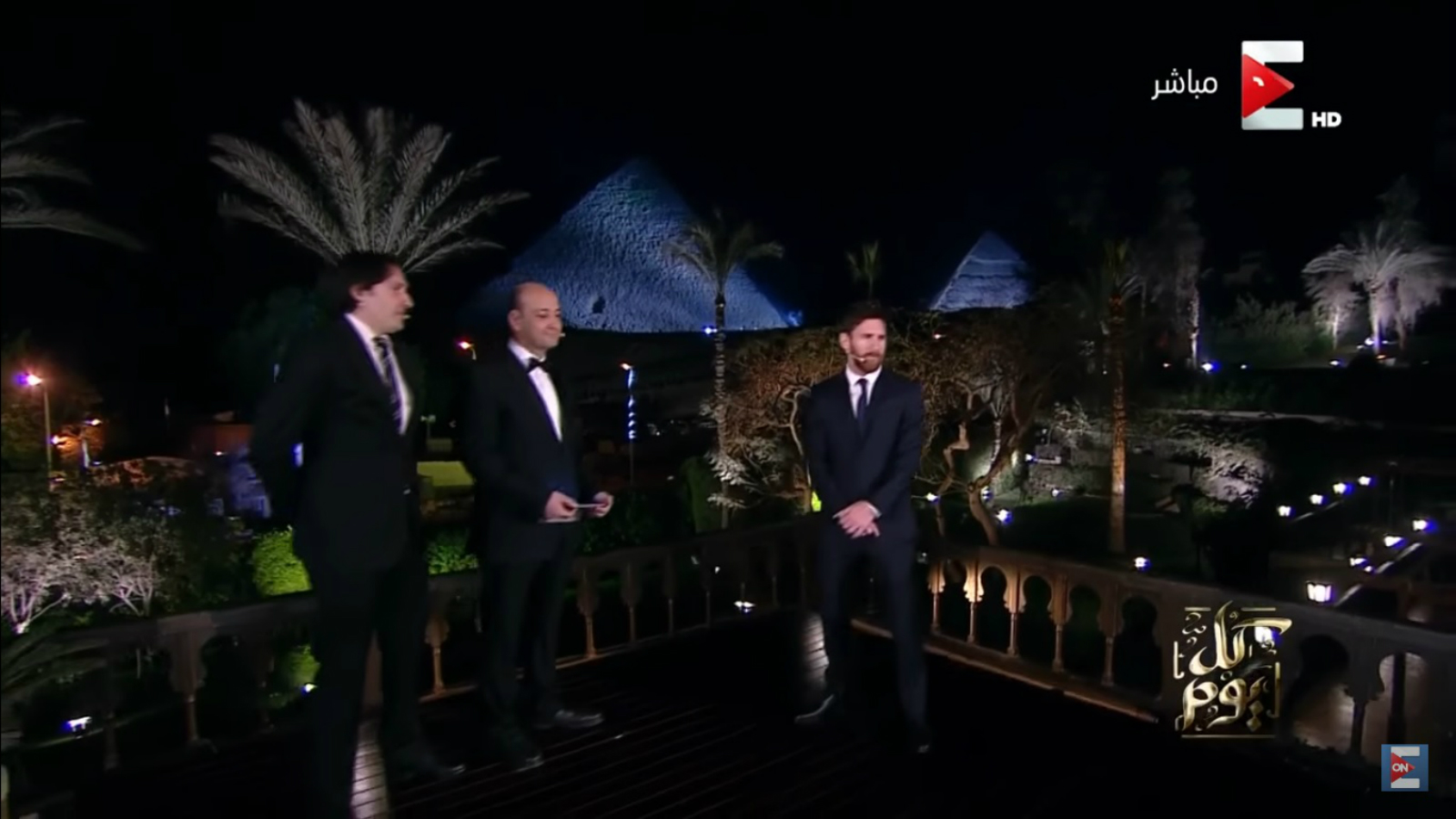 Egypt, you have outdone yourself with this Messi trip. And not in a good way. To say the red carpet was rolled out for Barcelona superstar Lionel Messi’s welcome (organized by the ever-dignified folks at ONTV as part of the footballer’s hepatitis C “tour ‘n cure” ambassadorship) would be an understatement of epic proportions.

Celebrities and heads of state get the red-carpet treatment, but what took place last nightwas more akin to a rain dance offered in loving worship of a deity. After getting a tour of the Pyramids by none other than Egypt’s informal Antiquities Minister Zahi Hawass, the media-shy Messi was treated (to his own shock) to a fete at the Mena House Hotel that made Queen Elizabeth’s coronation look like your five-year old’s birthday party at Pizza Hut.

The gala was attended by seven cabinet ministers, including Finance Minister Amr ElGarhy (watch, runtime: 0:41 — caution, the amateur footage will make your head spin if the gala itself doesn’t.)

There to interview Messi was Amr Adib, dressed as if he was preparing to get on bendedknee and propose. Messi, who arrived in the longest motorcade in history (watch, runtime: 3:34), looked confused by all the attention. It may have been Adib’s voice — which literally made one of our writer’s cats lose its mind. Still, Messi had enough presence of mind to plug the Tour N’ Cure hepatitis C medical tourism program launched by Prime Pharma and spoke highly of the sites and people he met on his very brief trip here (watch, runtime: 2:17).

Having someone of Messi’s global fame visit Egypt to help give a boost to our tourismindustry is a great thing. But what message does it send when we take it overboard like this? Messi will not cure hep C, save tourism single handedly, or even prompt Adib to leave his wife.

Back to in the (relative) oasis of sanity that is Hona Al Assema: Host Lamees Al Hadidi discussed obstacles to exporting cotton with Hammad Abdallah, the head of the textiles division at the Engineers Syndicate, who implied that the government seemed disinterested in helping aid the struggling textile industry, which he says has huge export potential (watch, runtime: 18:36).

Yahduth fi Masr’s Sherif Amer interviewed Abla Abdel Latif, who is still the head of President Abdel Fattah El Sisi’s Economic Development Council. The two spoke about an initiative subbed “Your Job Near Your Home” initiative, which would develop cottage industries and SMEs in rural villages. Abdel Latif said that the initiative will ultimately help integrate regional SMEs into the supply chains of larger businesses closer to major population centers.

Federation of Egyptian Chambers of Commerce member Alaa Ezz told host Lobna Assal in a phone interview that the federation has requested that the Finance Ministry set custom tariff exchange rates once every week, instead of every second week (watch, runtime: 7:19).