Russia’s delivery of MiG-29 aircrafts to Egypt on schedule

Russia’s contract with Egypt to deliver MiG-29 fighter aircrafts to Egypt is moving on schedule, Russia’s Federal Service for Military-Technical Cooperation Deputy Director Alexei Frolkin said, according to Sputnik. The contract, reportedly for 50 MiG-29 Fulcrum multirole fighters, sets 2020 as a completion deadline for delivery. Frolkin made the comments at the 2017 IDEX exhibition in Abu Dhabi, which comes with “considerable movement” in the market for fighters in MENA. “For beleaguered fighter manufacturers in Europe and the USA, beset by shrinking budgets in their domestic markets, the fighter boom in the MENA region has been a welcome development. For Dassault, for instance, the sale of the Rafale to the Egyptian air force represented the first firm order for the type after many years of marketing, and a number of “near misses” such as an aborted sale to Morocco,” David Donald writes for IHS Jane’s 360. Sending a different message was the CEO of the Rostec State Corporation who said, “Russia is ready to sign the [agreement] on military technology deliveries to Egypt as soon as Cairo solves its financial problems.”

Are we buying Russian choppers for Mistrals? Sputnik says Egypt is considering a Russian offer to deliver Ka-52 Alligator helicopters for its Mistral helicopter carriers.

This comes as Egypt is positioning itself on the sell-side of the arms trade, making its first appearance at the Idex defense trade show we note above, Gulf News reports. We here at Enterprise love exports of any form.

On a related note, Egypt has been ranked as the 11th largest importer of arms from 2012-2016, a period which saw the highest level of arms sales globally since the Cold War, according to the by the Stockholm Institutional Peace Research Institute. The global spike has been driven by demands in the Middle East (rising 86% over 2007-2011) and Asia. Neither the Institute’s press release or its charts provide a breakdown of figures for Egypt, but other outlets have noted that Egypt’s purchase of Mistral-class ships and Rafale aircrafts have raised France’s rankings as an exporter. Saudi Arabia is the largest regional importer (growing 212% for the period) and Algeria is the largest importer in Africa, with 46% of all imports to the continent. 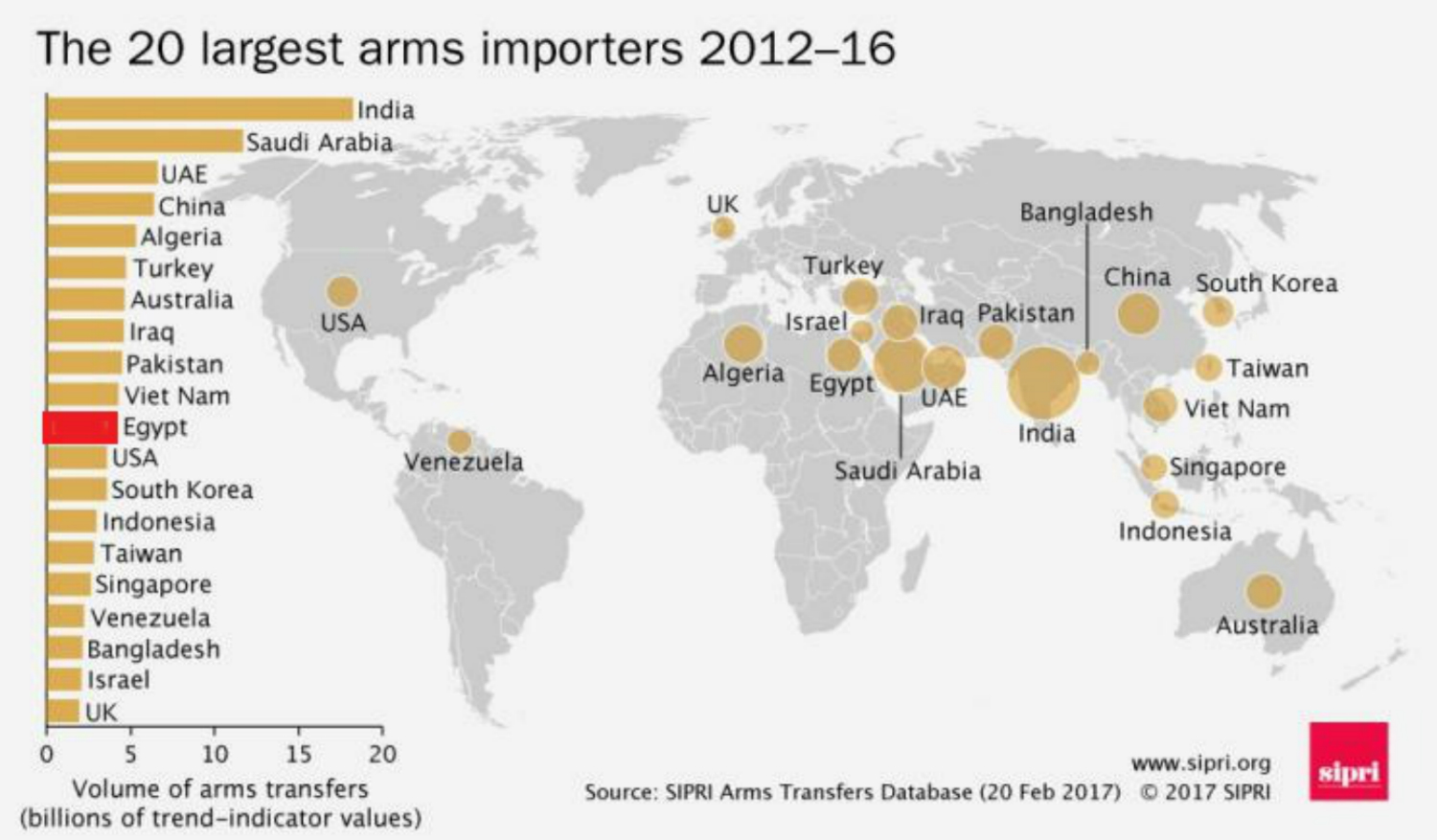