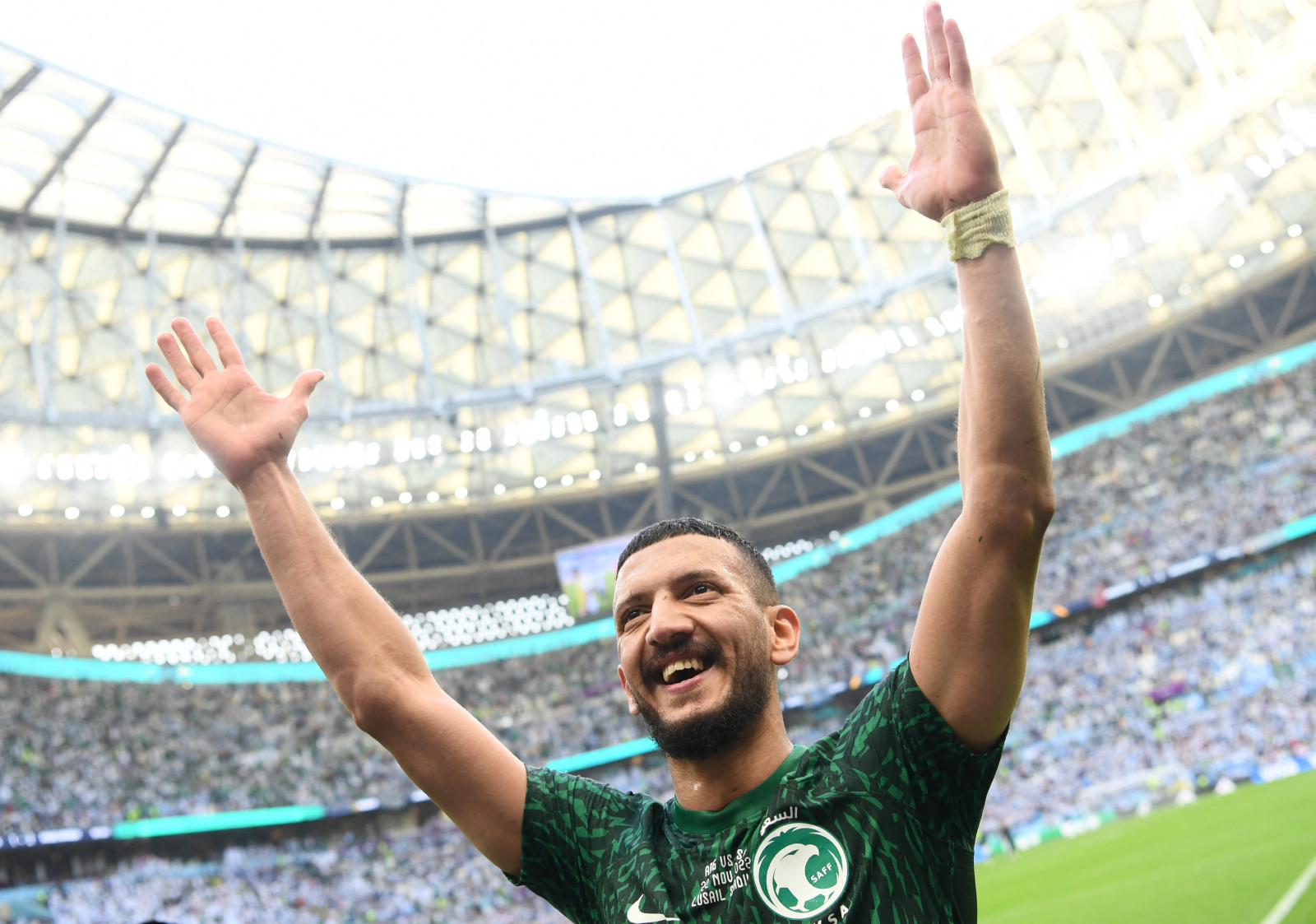 Good morning, friends, and congratulations once again to all our friends and family in Saudi after the Green Falcons’ stunning upset of Argentina at the World Cup yesterday. Unlike us here in Egypt, folks in KSA get too few official days off, so we hope all of you over there are enjoying your impromptu national holiday. (More on the game below.)

(And no, Resident 15 Year Old, being one-quarter Saudi doesn’t give you the right to claim the holiday given you live and go to school in Cairo…)

It’s a pleasantly quiet morning on the news from, with the big stories of the day including Hisham Ezz Al Arab’s return to CIB as a non-executive board member. Meanwhile, the meltdown on Planet Startup continues as Swvl has reportedly fired a large number of staff. That meltdown isn’t stopping some folks from deploying capital, particularly if they’re backed by DFIs or other international agencies. The latest is Modus Capital, which has launched a venture builder with backing from USAID.

WATCH THIS SPACE #1- The IMF executive board’s public calendar now shows its first scheduled meetings for early December, and we’re not yet on the list. The board will meet next month to sign off on our USD 3 bn package after we reached a staff-level agreement in October. The cabinet economic group met yesterday to discuss unspecified issues related to the facility, spokesman Nader Saad said in a statement that also emphasized ministers were keeping a watchful eye on the nation’s FX position. Short-term priorities include promoting tourism in general and medical tourism in particular, the statement suggested.

PSA- The calm before the hammer comes down: The 24 companies that have failed to file their 3Q financial statements on time will have until 7 December to get them in, the EGX said in a notice (pdf) out yesterday. 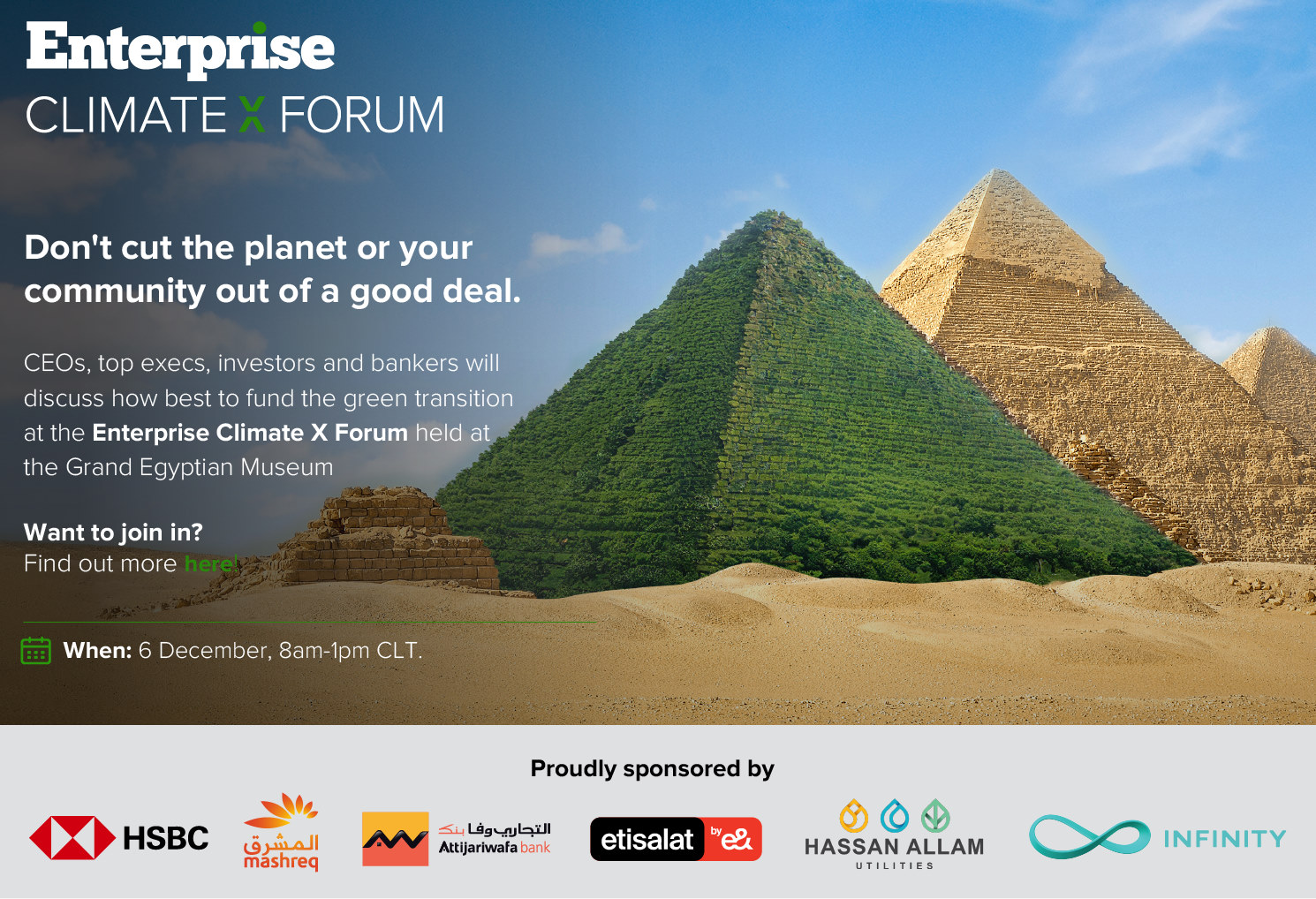 The Enterprise Climate X Forum is fast approaching, and we’re incredibly excited to meet with some of you in Cairo at the Grand Egyptian Museum on Tuesday, 6 December 2022. We get underway with a networking breakfast at 8am CLT.

What’s on the table? CEOs, execs, bankers and development finance folks will mull over a variety of topics, including:

With that in mind, we’ll be dropping little notices in stories and topics we intend to explore more of at the forum. Study up if you’re coming.

Some of the biggest names in business and finance are on board — are you? If you’re a C-suite exec, business owner, climate professional, DFI staff, investor or banker, please email us at climatexrsvp@enterprisemea.com to signal your interest, letting us know your name, title and where you work. You can learn more on our conference website here.

*** YOU MUST REGISTER TO ATTEND by clicking the link on your registration email. Attendance is by invitation only. You’ll need a special QR code to gain access to the GEM on event day.

It’s day four of the World Cup: Teams in groups F and E play their openers today (all times CLT):

There’s only one story coming out of Doha that needs your attention this morning: Saudi Arabia delivered one of the all-time great World Cup upsets, beating Argentina 2-1 and putting Lionel Messi’s final chance at getting his hands on the trophy in jeopardy after just 90 minutes of football. If it wasn’t for Saudi’s offside trap working like a charm, the underdogs could have been 4-0 down by halftime, with the linesman chalking off three goals after Messi netted an early penalty. But two goals inside five minutes early in the second half gave the Green Falcons a shock lead, and after 40 minutes of dogged defending, they claimed a famous win against one of the (former?) favorites to win the tournament.

HAPPENING NEXT WEEK- We’re finally getting a commodity exchange: The Egyptian Mercantile Exchange (EMX) — FKA the Egycomex — will go live on Sunday, the Supply Ministry said in a statement yesterday. Traders will be able to buy and sell wheat from next week, according to the ministry, which plans to make more commodities tradable on the exchange in the coming months. GASC will offer imported wheat from its stock for sale to private mills through the exchange twice a week, the ministry said.

FYI- This is a spot market, meaning traders will only be able to buy and sell commodities at the current market price, rather than hedge and speculate based on future prices.

But futures are coming: The EGX intends to launch futures trading on the exchange by the middle of 2023, according to a senior source at the bourse, who told us recently that it’s working on setting up a clearing house and deciding on tech.

Why now? The decision to launch the EMX comes as part of the ministry’s efforts “to stabilize prices … and contribute in meeting imported wheat needs of private mill companies” to ensure price stability in the local market, the statement said.

Four years in the making: The commodities exchange has been in the works since 2018 and is expected to eventually allow traders to buy and sell a range of commodities including gold, oil, sugar, rice, steel, and cotton. It was scheduled to go live before the end of the year.

THE BIG STORY ABROAD- No single story is driving the conversation in the global business press this morning, with a hodge-podge of stories competing for your attention. Among them:

WATCH THIS SPACE #2- The US is formally reviewing its relationship with Saudi Arabia, Secretary of State Antony Blinken said, without going into details of where the review may be headed.

Is OPEC+ about to reverse course on supply cuts? Oil producers are considering raising output in anticipation of fresh Western sanctions on Russian crude, the Wall Street Journal reports. After angering the West last month with a shock supply cut, the cartel is now deliberating whether to increase production by 500k barrels a day at its next meeting on 4 December. The meeting will take place a day before the EU is due to impose an embargo on Russian oil and G7 nations introduce a price cap mechanism, moves that could take Moscow’s output off the market and stoke volatility in global energy markets.

The deadline to apply for the Chicago Booth Executive Program in El Gouna is Sunday, 27 November. The two-week program, which kicks off in March 2023, offers executives from Egyptian public and private sector the skills to help them “become a better leader for your organization and support Egypt’s growth in the years ahead.”

Payment and fintech conference Pafix will be held as part of Cairo ICT 2022 from 27-30 November at the Egypt International Exhibition Centre in New Cairo.

The US and Russia will hold nuclear talks in Cairo next week: Washington and Moscow will discuss resuming mutual nuclear inspections during week-long talks from Tuesday, 29 November through to 6 December, Russian Deputy Foreign Minister Sergei Ryabkov said, according to CNN.