Good morning, friends, and welcome to a massive day for both Egypt’s green economy as well as our export ambitions.

To quote John “Hannibal” Smith: “I love it when a plan comes together.” For years now, top Egyptian players including Hassan Allam, Infinity and OCI (among others) have been laying the groundwork for a green energy economy — building up technical expertise and partnering with international players (particularly in the GCC). Bankers, regulators, and policymakers have for decades been adept at dealing with megaprojects (think: Globelec, Egyptian Refining Company, the Siemens power plants). And all of them built up expertise in renewables through projects including the 1.8 GW Benban solar park.

It all came together yesterday when Hassan Allam Utilities, Infinity Power and the UAE’s Masdar pulled the trigger on a world-scale 10 GW wind farm. Throw an announcement by Norway’s Scatec that they want to add 5 GW to their generation capacity here and it’s official: We are now the premier energy hub in the eastern Med.

Case in point #1: Renewable energy powers our first green hydrogen plant, a 100 MW venture between Fertiglobe, Scatec and the Sovereign Fund of Egypt. The plant, built with local and global expertise by Orascom Construction, entered the commissioning phase yesterday with a high-profile ceremony.

Case in point #2: We’re going to be exporting GW and GW of power to Greece through a series of links that Greek PM Kyriakos Mitsotakis was talking up yesterday at COP27, as Enterprise Climate notes this morning.

^^ We have the rundown on all of this and more in this morning’s news well, below.

MEANWHILE- Oil isn’t going anywhere just yet — and we could face a return to three-digit prices. Oil is on the cusp of surpassing USD 100 per barrel for the first time since August thanks to the decision by OPEC+ last month to cut supply, suggesting that the group of oil producers is over-tightening the market, Bloomberg writes.

IT’S A HUGE DAY FOR our friends in banking and finance as the Finance Ministry hosts “Finance Day” in Sharm.

What’s the big deal? Finance ministers, bankers, investors, multilaterals, development finance institutions, and anybody else with an interest in how governments and businesses alike access finance for climate will in meetings and rountables — or chatting on the sidelines. In addition to pushing lenders and investors to step up to the plate, state officials are looking at a series of facilitated and sustainable climate finance agreements for developing and African countries.

Prime Minister Moustafa Madbouly will kick off the day’s proceedings, setting the stage on main challenges and avenues for climate finance. Sessions throughout the day will discuss the role of policy in climate investment, reducing the cost of green borrowing, financing a just transition in Africa, the role of MDBs in unlocking climate finance, and financing loss and damage.

ALSO- The COP27 Presidency will launch the Sharm El-Sheikh Guidebook for Just Financing.

AND- Announcements. Lots of them, from banks, investors, DFIs and others.

** Check out the full agenda for the day here (pdf).

Developing countries will need USD 1 tn a year in external financing by the end of the decade to combat climate change, according to a report (pdf) on climate finance written by a panel of high-level experts, and commissioned by the UN and the COP26 and COP27 presidencies. Emerging markets and developing countries barring China will need some USD 2.4 tn in overall annual investments by the end of the decade to boost resilience and achieve sustainable development goals, the report says, adding that USD 1 tn of that should come from investors, development finance institutions, and developed countries, while the remaining USD 1.4 tn can be secured from local private and public sources.

NWFE gets tub tubs: The report name-checks our Nexus on Water, Food and Energy (NWFE) program as a “pioneering model” for emerging markets that can attract investments to climate-related projects in a concrete, actionable way. Reuters also picked up the report.

The Senate will reconvene next week on Sunday and Monday to discuss the FX incentive bill and another draft bill setting up the Digital Egypt Fund. The first bill, which received preliminary approval by a Senate committee earlier this week, would grant income tax breaks to investors who use FX to finance at least half of the cost of their projects. The second bill would set up a fund to support the Communications Ministry’s Digital Egypt initiative.

The results of yesterday’s US midterm elections are trickling in: Things are still too close to call in the Senate race, with Democrats marginally ahead with 42 seats to the Republicans’ 41 in the minutes before dispatch this morning. The GOP is doing better in the elections for the House (144 seats to the Democrats’ 80) and party figures are optimistic that they will retake the lower chamber. Of the notable results so far, potential Trump rival Ron DeSantis was re-elected in Florida while Marco Rubio was returned to the Senate in the sunshine state. Watch the results as they come in: Associated Press | New York Times | Washington Post.

WATCH THIS SPACE- A Mike Bloomberg-backed investment conference on the horizon? Prime Minister Moustafa Madbouly and American businessman Michael Bloomberg yesterday discussed the idea of holding a conference in Egypt to promote investment in April or May 2023, according to a cabinet statement.

Gov’t wants to make sure COP attendees get in some retail therapy: The Finance Ministry and the Tax Authority have designated certain stores in Sharm El Sheikh where tourists can get VAT refunds, and put up multilingual signs in the city to let COP delegates know about the rules, according to a statement. Tourists are entitled to VAT refunds on all purchases above EGP 1.5k, as long as their stay in Egypt lasts less than three months. Read more on the rules in English or Arabic at the Tax Authority’s website here. 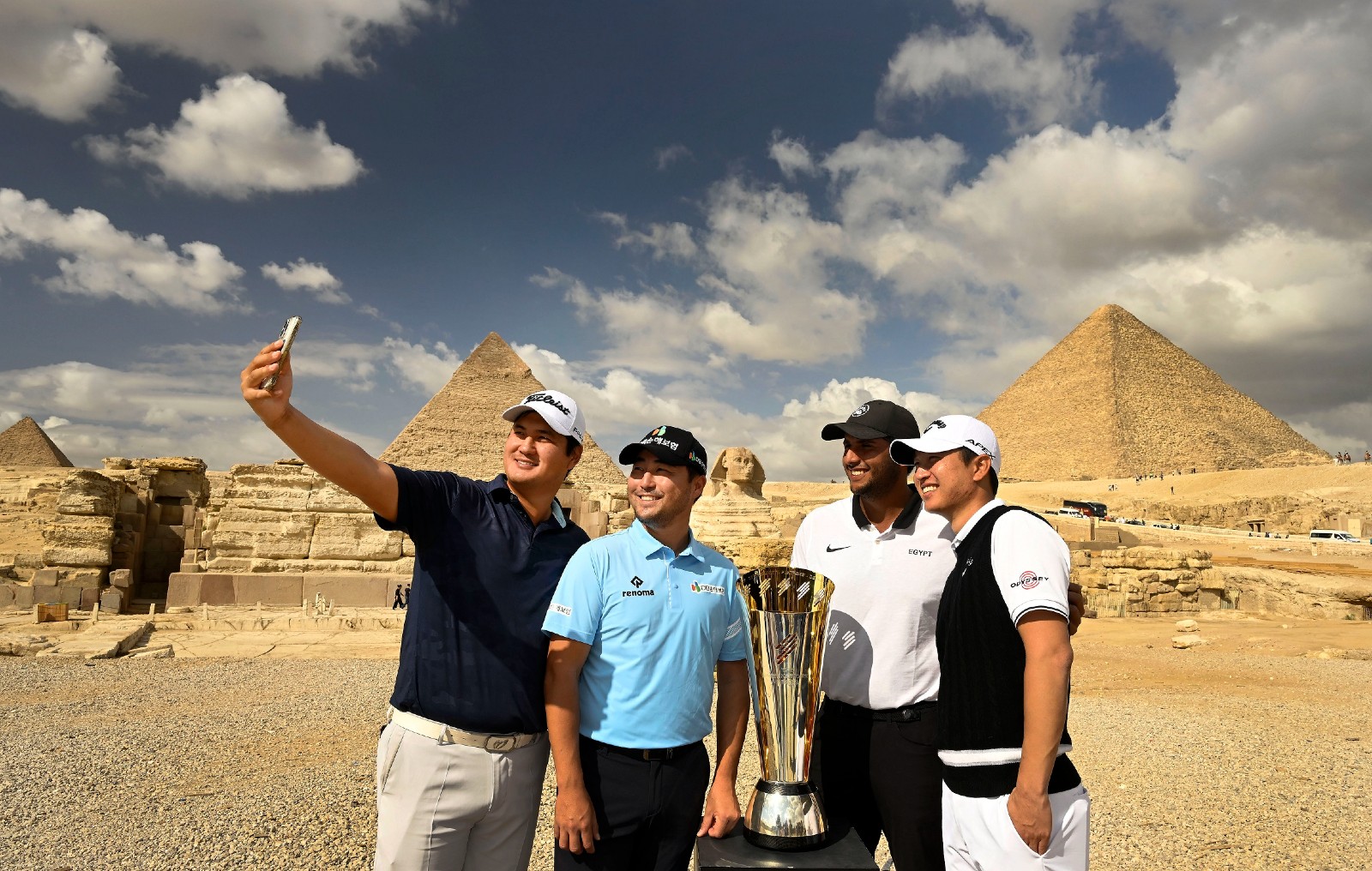 Some of the world’s best golfers visited the Giza Pyramids ahead of the first International Series Egypt tournament, which will take place at Madinaty Golf Club tomorrow, 10 November, through Sunday, 13 November, according to a press release (pdf). US star Sihwan Kim, Canada’s Richard T. Lee and Korea’s Jeunghun Wang visited the Pyramids yesterday alongside our own Issa Abou El Ela.

The Enterprise Climate X Forum, our first industry-specific conference is taking place on Tuesday, 6 December. The Enterprise Climate X Forum will give insiders and newcomers alike the chance to talk about how to build a climate-centered business — and how to make sure your business continues to have access to the funds it needs to grow. Expect it to be heavy on lessons learned in Egypt and other global growth markets — and lots of success stories.

Stay tuned very soon when we reveal the venue. You won’t want to miss it after it’s been announced.

DO YOU WANT TO ATTEND? The first wave of invites is going out today. If you’re a C-suite exec, business owner, climate professional, DFI staff, investor or banker, please email us at climatexrsvp@enterprisemea.com to signal your interest, letting us know your name, title and where you work.