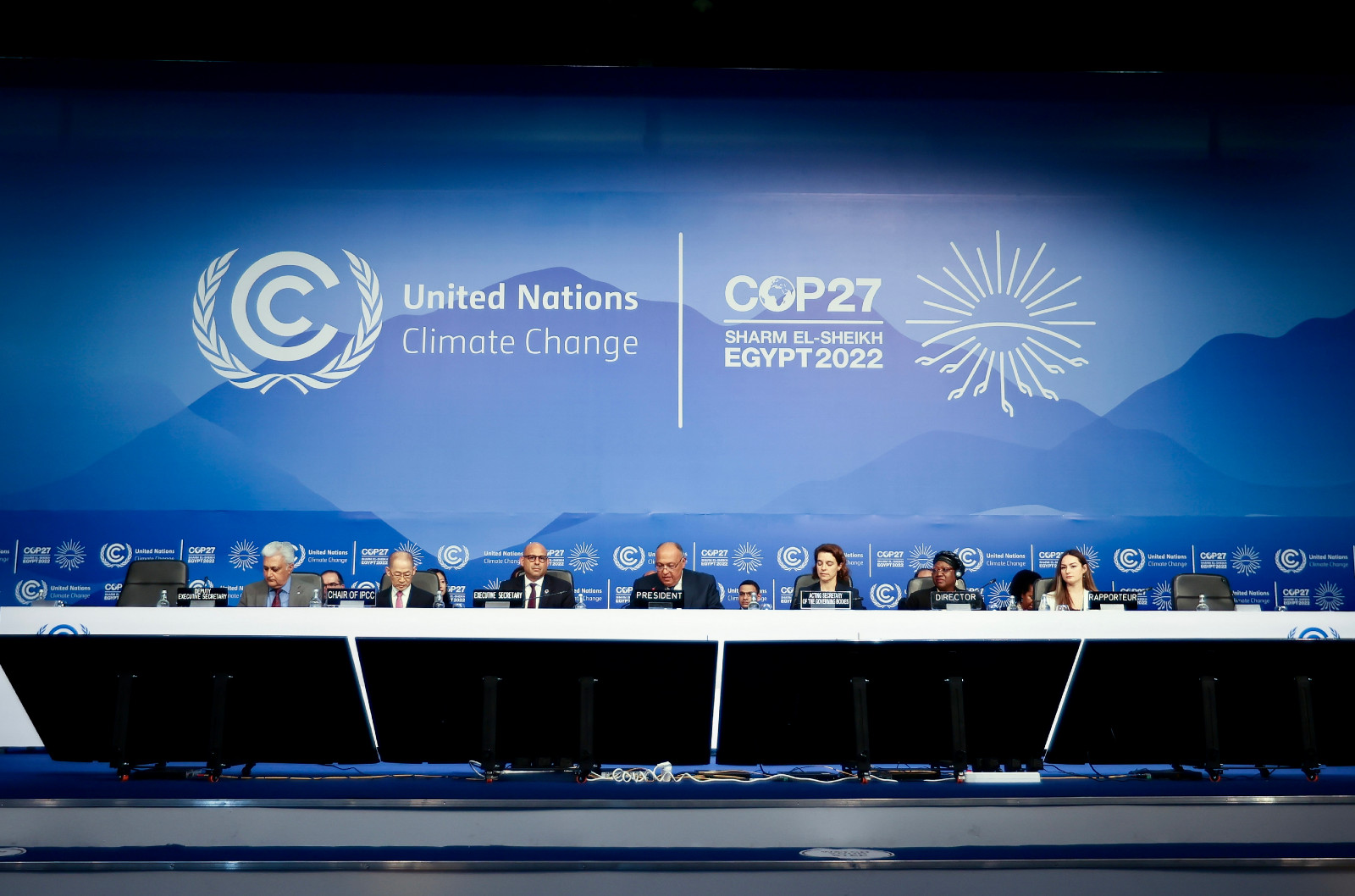 Nations will discuss loss and damage financing for the first time at COP27: A “breakthrough” agreement allowing diplomats to officially debate for the first time who should pay for damage sustained by the countries most vulnerable to climate change was announced on the first day of COP27 yesterday.

High drama: The agreement was hashed out during two days of fraught preliminary talks which saw the opening plenary session delayed for hours, with negotiators unable to agree on whether to put it on the agenda.

The goal: Delegates are aiming to reach a conclusive decision on loss and damage “no later than 2024,” Egypt’s Foreign Minister and COP27 President Sameh Shoukry said in his opening speech (watch, runtime: 14:19), during which he emphasized the talks would be constructive and focused on “cooperation and facilitation” rather than “liability and compensation.”

Progress: The agreement “creates for the first time an institutionally stable space on the formal agenda of the COP and the Paris Agreement to discuss the pressing issue of funding arrangements needed to deal with existing gaps in responding to loss and damage,” Bloomberg reported Shoukry saying.

But it’ll be a tough two weeks ahead: Harjeet Singh, head of global political strategy at the nonprofit Climate Action Network International, described the weekend’s negotiations as “extremely challenging,” and others are voicing trepidation about the likelihood of an agreement over the next two weeks. “This is going to be a difficult COP,” one delegate told the Guardian.

A showdown has been brewing for some time: Wealthy nations have opposed official discussions on climate compensation for over a decade and at COP26 blocked a proposal for a dedicated loss and damage financing body, supporting instead a dialogue for funding discussions to take place over three years. With rich nations already being accused of “bullying” poorer countries during the weekend’s talks, expect the question of who pays for the climate crisis to be a major source of tension at this year’s summit.

Climate finance has been a key area of focus for policymakers in the run-up to the summit, with Egypt climate czar Mahmoud Mohieldin being particularly vocal in calling for compensation for climate change-driven damage and a funding shift away from debt, towards investment (here and here).

Another note hit hard and early yesterday: The need for action in the face of “climate chaos.” COP27 must spur urgent and credible climate action, UN Secretary-General Antonio Guterres said in a video message yesterday, terming the UN’s newly-released State of the Global Climate Report 2022 a “chronicle of climate chaos” (watch, runtime: 1:11). Guterres echoed the message of special representative for the COP27 presidency Wael Aboulmagd, who emphasized the importance of implementation to reporters over the weekend.

And the importance of moving beyond COP26 pledges: It’s time to start delivering on the Paris Agreement and other previously agreed climate pledges, Aboulmagd said. Last year’s summit in Glasgow saw several important pledges agreed on, including “phasing down” the use of coal, halting deforestation by 2030, slashing methane emissions by 30% by 2030, and submitting updated national plans with more ambitious targets.

Sharma also warned against delaying action: “Our shared long-term future does not lie in fossil fuels,” Sharma said in his address yesterday. While “every major report published this year underscores the point that progress has been made … there is so much more to be done in this critical decade,” Sharma added.

You can expect to hear lots more about climate finance and the need for implementation over the next two weeks. These were two major conference themes out of four flagged in EnterpriseAM’s pre-COP roundup yesterday. To that end:

Who’s on board: The African Development Bank, European Bank for Reconstruction and Development (EBRD), European Investment Bank, and the World Bank will help countries and other clients include adaptation and mitigation into their overall economic planning, offering support in areas including policymaking, investment plans and securing funding sources, they said in a joint statement (pdf) yesterday. Boosting adaptation finance for low-income countries, island states, and vulnerable populations, and increasing concessional finance will be among their priorities, it added.

By the numbers: Last year, the lenders collectively channeled USD 51 bn in climate finance to low- and middle-income countries — split 65% for mitigation and 35% for adaptation, according to the EBRD. Some USD 31 bn went to high-income countries, with 95% earmarked for mitigation and 5% for adaptation. They mobilized a further USD 41 bn of private finance.

Other major COP27 themes to keep an eye on: A “just energy transition”: Individual countries need access to energy even as they work towards hitting their decarbonization targets, said Aboulmagd, noting that natural gas — the lowest-emission hydrocarbon — is increasingly viewed as a “transition fuel.” African public and private sector leaders have made the case for the continent to see a “just energy transition,” where countries can exploit their vast gas reserves. And prominent GCC voices — including Saudi Aramco CEO Amin Nasser and UAE energy ministry official Yousef Al Ali — have argued that the speed of targeted divestment from fossil fuels isn’t viable, as existing renewables capacity can’t satisfy energy demand.

And Egypt’s exhortations to not be distracted by political squabbling: COP27 “has to be a watershed moment where the world rises above differences that exist outside of the realm of climate change to come together to address what is perhaps the most universally acknowledged threat to humanity,” Aboulmagd said.

Green zone inaugurated: Prime Minister Moustafa Madbouly inaugurated the summit’s green zone which hosts exhibitions and pavilions. Activities are set to kick off on 9 November and run through to Thursday 17 November. You can check out the agenda for the green zone here (pdf).

Agreement to regenerate Lake Bardawil: Belgian dredging specialists DEME Group, Alexandria Maritime Services (Alexmar), and the Suez Canal Authority signed an MoU to regenerate Lake Bardawil in North Sinai, cabinet said in a statement. DEME is part of a group of water specialists that have proposed dredging the area and desalinating the soil to restore the lake’s ecosystem, which is under threat from rising temperatures.