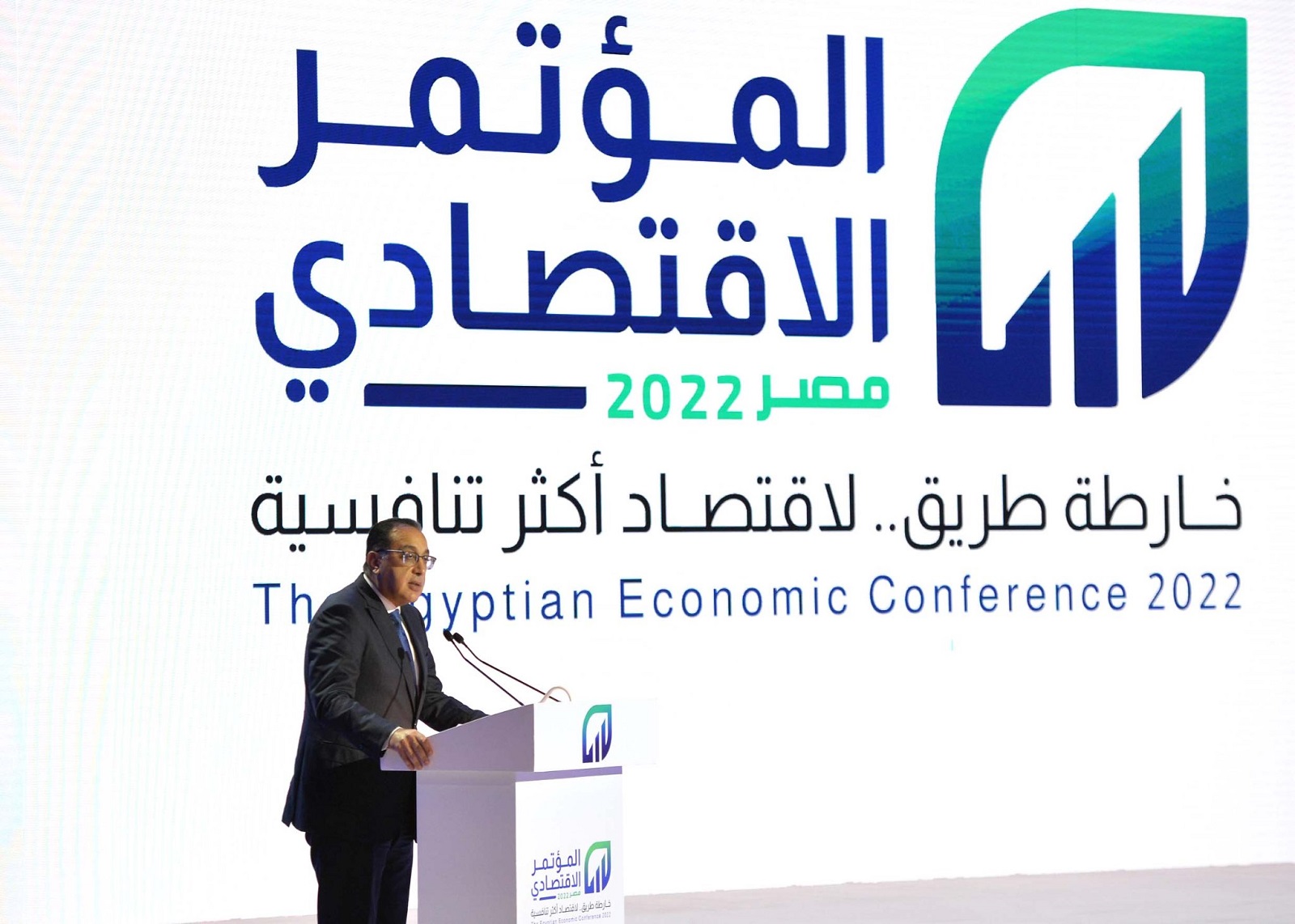 The Egypt Economic Conference wrapped yesterday with closing speeches from President Abdel Fattah El Sisi (watch, runtime: 1:59:16) and Prime Minister Moustafa Madbouly (watch, runtime: 11:43), both of whom laid out what they see as next steps for the state’s role in the economy, manufacturing and other policy areas after three days’ worth of public talks.

What the government says it wants: To boost private-sector involvement in the economy, strengthen local industry, and grow exports. May we humbly point to our five-step plan that puts export-led growth and FDI at the heart of a new Egyptian economy?

Stay tuned for Egypt Economic Conference 2023: The government wants to hold the conference on an annual basis, with the next edition set to take place sometime in 1H2023, Madbouly said during his closing speech. The next edition will follow up on the measures agreed on during this year’s edition to boost the economy. It will also act as a platform to drum up investment in various sectors from international companies, he said.

The incentives include a 55% tax cut on income generated by projects in the sectors, to be rebated within 45 days of the tax return submission date. This is likely the same tax cut that cabinet proposed earlier this week, which would see companies that use hard currency to fund at least half of the investment cost of industrial projects in Egypt receive a 55% rebate.

Some 56% of our imports are production inputs, Samir said, adding that “we need a strong industry that can overcome any external shocks, which is doubtful in light of the amount of production inputs we import.”

More export subsidies: The Finance Ministry will soon open the door to another phase of the export subsidy program, through which it plans to pay out some EGP 5.5 bn in subsidies to exporters, Finance Minister Mohamed Maait said during the session. The ministry has so far paid out some EGP 4.4 bn in export subsidies throughout the four phases of the program, which allows exporters to receive overdue subsidies in a single payment rather than in installments over four to five years, in return for a 15% haircut.

FinMin is also working on shortening the time it takes to pay out subsidies to just a month from receiving documents from exporters, Maait added.

More digitization: The Trade and Industry Ministry will soon sign an agreement with EGX-listed e-payments player e-Finance to establish an online platform and database for all industries to access governmental services, Samir said during the session.

No state ownership policy document yet: The state ownership policy document will be finalized within weeks and sent to the cabinet to be reviewed for final approval, Prime Minister Moustafa Madbouly said during the final day of the Egypt Economic Conference 2022. The document, which was being discussed on the second day of the conference, was supposed to be unveiled during the gathering, after policymakers amended the original in response to feedback they received from the private sector during public consultations.

Refresher: The state ownership policy document details the government’s plan to more than double the private sector’s role in the economy to 65% over the next three years, and attract USD 40 bn in investment over the next four years. The document outlines the industries which the government plans to open up to private companies and the ringfenced strategic sectors that will continue to see heavy state involvement.

ON THE STATE IPO PROGRAM-

Cabinet ❤️EGX: “The priority exit strategy for the state privatization program moving forward will be towards IPOs on the EGX,” Madbouly said during his speech, without disclosing further details. This came in response to suggestions from several MPs and business leaders to make room for the public to purchase stakes in state-owned enterprises, rather than selling the stakes to foreign investors.

But, but, but… Reflexive nationalism is … not smart. There is absolutely nothing wrong with derisking a sale (and perhaps upping the competitive metabolism of a company) by selling a large stake to a strategic investor — ahead of a future offering of a smaller (say, 20%) take in an IPO that would be open to both domestic and international investors. Foreign capital brings global expertise; policymakers need to stick to their metaphorical guns when MPs’ inner economic Nasserists awake.

Refresher: The government said at the beginning of the year that it wanted to pull the trigger on 10 primary and secondary listings by state companies this year, only for the plans to be derailed by the global and domestic fallout (in the economy and in markets) from Russia’s invasion of Ukraine. Sovereign Fund of Egypt (SFE) boss Ayman Soliman has since said that stake sales are likely the order of the day for the state’s privatization program in the foreseeable future due thanks to volatility in global equity markets. More recently, the SFE has set up a pre-IPO fund aimed at selling strategic stakes in state-owned enterprises ahead of listing on the EGX once markets stabilize.

State-owned and military-owned companies are ready for privatization, El Sisi said yesterday (watch, runtime: 1:57), likening them to an “inheritance we must preserve” and talking down the notion that there would be layoffs as companies are sold (in whole or in part) to the private sector.

High on the privatization priority list: hospitals and ports. The Madbouly government is ready to offer public hospitals to the private sector with the aim of improving health services, El Sisi said, according to CNBC Arabia. The government last month said it wants to attract private sector investment to state-owned Heliopolis Hospital under a wider plan to open up the healthcare sector to private-sector players. The state is also looking to privatize port operations, El Sisi said. CNBC reports Transport Minister Kamel El Wazir as saying our ports have gotten attention from Emirati, Germani, Qatari and Chinese companies.

New inflation target coming: The Central Bank of Egypt (CBE) will announce a new inflation target before the end of the year, Prime Minister Moustafa Madbouly said, recapping remarks from earlier in the conference by CBE Governor Hassan Abdalla, who plans to roll out a new inflation policy by the end of the year. Inflation in September hit a fresh four-year high of 15.0% y-o-y, more than double the central bank’s current target of 7% (±2%) in 4Q 2022. The bank has repeatedly said that it will “temporarily tolerate” inflation above its target as it continues to assess the impact of the 300 bps worth of hikes made earlier this year.

The government is working on a new package of social support measures set to come into effect starting next month, Madbouly said, without disclosing further details. This comes shortly after the government expanded the social safety net to include 1 mn more families, and upped ration card holders’ allowance in a bid to alleviate the pressures of inflation and the economic crisis on vulnerable families.

Egypt expects the cost of its green hydrogen production to be at USD 2.68 per kilogram in 2025, Electricity and Renewable Energy Minister Mohamed Shaker said. Shaker sees costs falling to USD 1.70 per kilogram by 2050, adding that Egypt is looking lock supply about 8% of global green hydrogen demand, bringing in up to USD 18 bn of revenues to the country.

The caveat(s): What we’re seeing now in the global green hydrogen / ammonium markets is akin to the Klondike or California gold rushes of the late nineteenth century. Global players (real and in their own minds) are flitting from country to country, inking MoUs and letters of intent to build new plants. Most companies have inked more MoUs than they have production capacity. None of them have put together finance packages. And the Biden administration (smartly) drilled a hole in every emerging market’s boat with production tax credits of up to USD 3 per kg, making it far and away the most attractive market for would-be producers.

The Madbouly government is walking out of the conference with over 200 recommendations, National Dialogue General Coordinator Diaa Rashwan said last night (watch, runtime: 13:33). Rashwan laid out some of the most prominent outcomes of the conference — the result of the many sessions that took place over the three-day period between government officials, experts and private sector players: