Climate change is coming for your beloved jar of honey 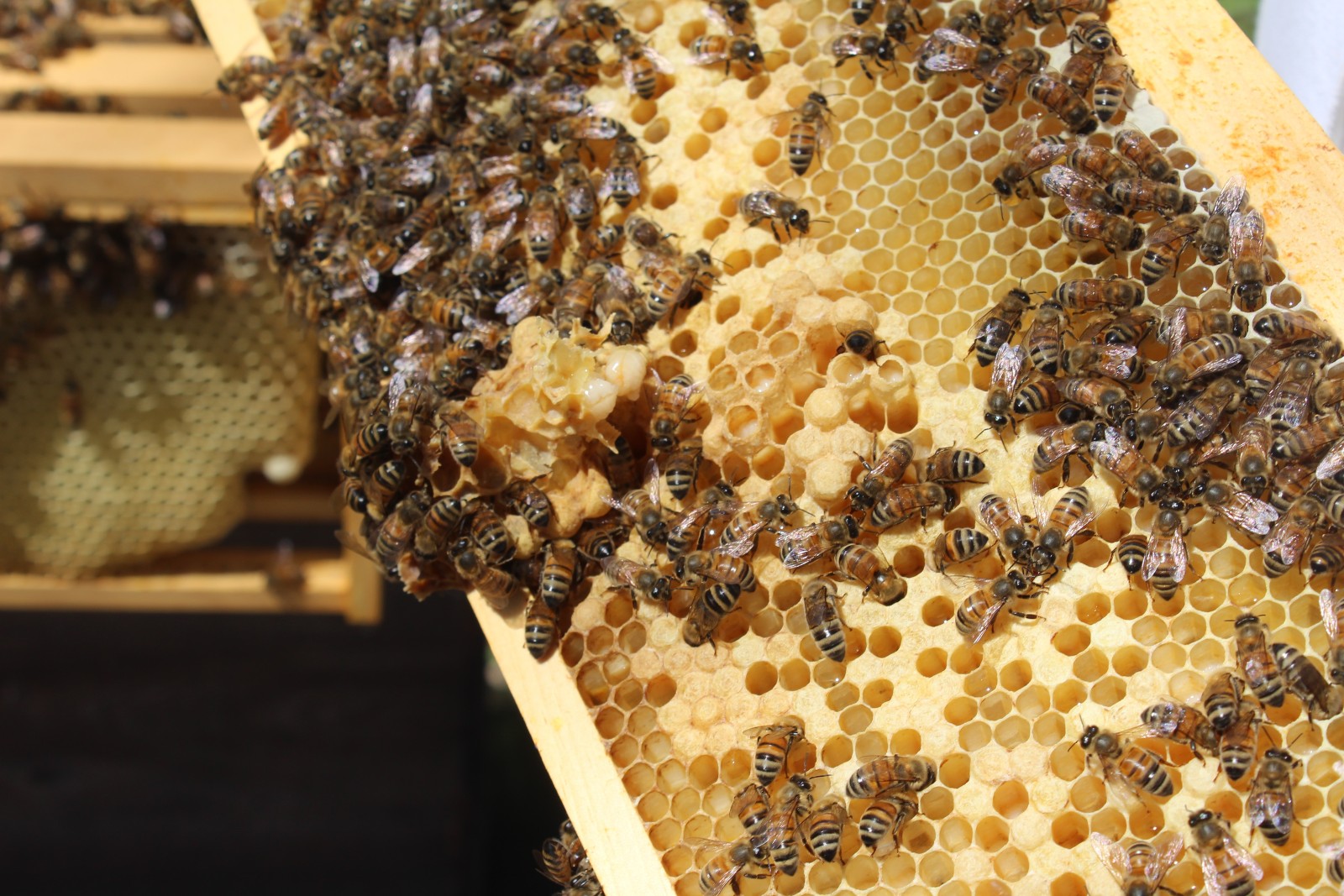 Climate change is putting Egypt’s honey industry under threat: Egypt’s production of honey, a food that has been deeply rooted in local culture for thousands of years, is coming under increasing threat. The country is an exporter, but faced with the existential challenge of climate change and rising economic problems at home, production is on the decline, industry sources tell Enterprise.

Bees play a crucial role in the healthy functioning of our agricultural systems: Bees are essential to our food systems and form the link between terrestrial ecosystems and modern agriculture. They also play an important role in fulfilling the UN’s Sustainable Development Goals by providing poor, rural and indigenous communities a source of income, according to the UN Food and Agriculture Organization (FAO).

And are key to the livelihoods of thousands in Egypt: The value of Egypt’s honey-related exports last year was USD 300 mn, according to Agriculture Ministry figures. That accounts for about 2 mn honey bee cells and 30k tons of honey being churned out by the some 25k families involved in the beekeeping industry, the figures show.

But climate change is threatening the industry: Honey production has slowed in recent years and the harvest season, which typically starts at the beginning of April and runs through to October, is now starting later in the year due to climate change, Younis Mahmoud, who owns Younis ِApiaries, tells us. “Production has dropped to about half its usual rate this season,” Mahmoud says. This is partially because of the unusual waves of cold weather that have been hitting the country in recent months and have persisted well into April, he explains. “If bees don’t collect nectar from flowers because of cold weather or strong winds then they start consuming the honey they’ve already produced.”

This has been hurting beekeepers for a few years now, Fathy Beheiry, head of the Arab Beekeepers Union tells us. “We’re not used to the extreme fluctuations in weather we’ve been seeing recently in Egypt. Sudden changes in temperature affects honey bee activity which ends up reducing production and increasing the risk of disease,” Beheiry says. But when it comes to measuring the scale of this problem, Beheiry, who has described the shortfall in production since the start of this year’s harvest season as moderate, says it's hard to say exactly how much has changed until the season is over.

The FAO has already sounded the alarm on the problem: The FAO has long warned of the risks posed by a downfall in pollinators around the world because of the threats facing bees. “The number of bees, pollinators and many other insects are declining in abundance due to unsustainable agricultural practices, pesticides, pests and pathogens, habitat destruction, and climate crisis,” Qu Dongyu, the organization’s director-general, has said previously.

Bee populations are already collapsing as a result of our changing climate, says Mohamed Habib, who owns El Habib Apiaries in El Beheira. “Seasons are changing, temperatures are fluctuating throughout the day and changing wind speeds and direction are all contributing to the collapse of bee populations and the outbreak of diseases like brood rot,” he says.

Habib is expecting beehives that would ordinarily produce 15 kg of honey will this year only have as little as 6 kg to harvest. Waleed Nashaat, CEO of Al Raheeq for Import and Export, which specializes in honey production, also expects a moderate harvest season this year, based on the industry’s preliminary figures.

Already, this year's citrus honey season “does not look promising," Ahmed Abdel Megeid, quality control manager at Imtenan tells us. Abdel Megeid has attributed his weak outlook on the season to be the direct consequence of climate change but cautions that it's still too early to make definitive judgements on the state of the industry right now.

Part of the problem also comes from the adaptation of plants to the changing climate. Bees depend on flowering plants as their primary source of nutrition, but many of the plants they rely on are experiencing biological changes that are already weakening colonies and could lead to widespread dying events, according to a study on climate change and honey bees.

Declining demand and rising costs are making things harder: Falling demand and the increase in production costs are exerting further stress on the industry, leaving beekeepers struggling to set prices that are commensurate with their rising production costs. “Since the start of 2022 and the subsequent increase in prices and the cost of living, we’ve seen demand for honey go down by some 15-20% from average levels,” Abdel Meguid tells us. “Egyptian honey has typically been really high quality and very well-priced … but [this year] we’ve seen an extraordinarily high number of beekeepers looking to sell their beehives because of the losses they’ve been sustaining,” Nashaat says.

Then there are supply-side problems: Disease has caused large portions of bee colonies to die out, making matters even more difficult for producers. The Agriculture Ministry should support honey producers in fighting off disease infecting bees and provide them the tools necessary to keep things under control, Nashaat said.

How do we soften the impact of climate change on honey production? Finding better and more climate-resistant bee species could be a start. But there are also beekeeping practices that could be improved by more training and an expansion in access to safe treatment for sick bees, says Beheiry. There could even be some promise in resuming the use of a particularly resilient species of ancient bee called the “Apis mellifera lamarckii,” alongside working to genetically modify other species in Egypt, he adds.

Expanding agricultural diversity: Growing more diverse flowering plants like Sidr, Buckthorn or Eucalyptus trees would go a long way in helping revitalize the beekeeping industry in Egypt, according to Beheiry. Biologically enhanced plant species designed to withstand a harsher climate could become part of an adaptation strategy, Mohamed Fathallah Abdel Rahman, head of the bee research department at the Agricultural Research Center and author of the report, tells us.

Fighting off pests and other naturally occurring threats and finding disease resistant DNA in bees could also be helpful, he said.

Incentives and regulation: Honey producers could use some additional government support in creating an official database for beekeepers, setting up new export markets and adding more export incentives for local producers, Beheiry adds. Efforts to construct a more centralized beekeeping community in coordination with the Agriculture Ministry is already underway, says Habib.

The government has already started working on expanding agricultural diversity through the 2015 launched 1.5 mn Feddan project which aims to widen the country’s agricultural diversity by some 20%, reduce nutritional deficiencies and expand the total area of inhabitable land. Other programs like Egypt’s Future for agricultural production and the Toshka El Khair project are angling towards similar ends.

The creative option — Mangrove Honey: Among the more creative tools being employed to mitigate the effects of coastal erosion on the country might have potential to help support the ailing honey industry in the future. The government’s 2020 project to plant mangrove nurseries on 500 feddans along the Red Sea coasts had inadvertently cultivated an especially welcoming environment for honey bees. One apiary had set up shop in close proximity to a Mangrove hotspot. “The advantage these plants have to offer is that they flower during a very sensitive time in a bee’s life cycle, extending from December through April, which is an ideal time for bees that typically lack alternative sources of nectar during this time of the year,” Mahmoud Abbas, an instructor in the Plant Protection department at the South Valley University who also manages the apiary, told us.

And the honey is clean: Though the beekeeping outfit has ultimately halted its operations on the Red Sea coast this year due to covid-19 and a lack of alternatives to the few Mangrove trees in the area, Mangrove honey has been found to contain almost no trace of pollutants or chemical additives, compared to most other sources of nectar in the country, and could have future potential.