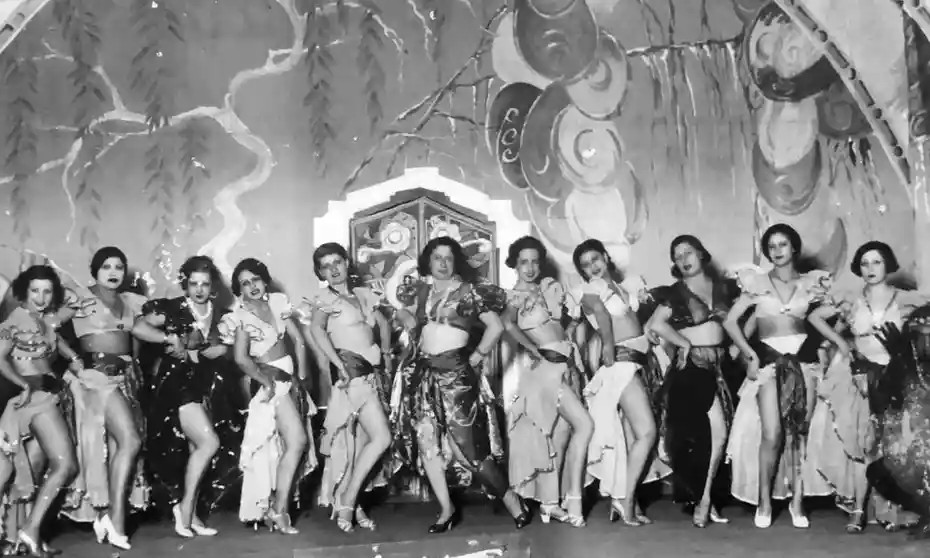 Arts and culture thrived in Egypt during the 1920s when a burgeoning music, dance and nightlife scene merged to create a cultural force unlike any other in the country’s history. The 1920s were in many ways an era where cosmopolitanism ⁠— at least in the country’s urban centers ⁠— was embraced and a sense of rebellion found its way into certain corners of Egyptian society.

A bustling nightlife scene was born in the 1920s thanks to the efforts of a few daring female entertainers: A mix of dancers, singers and late-night entertainers were for the first time establishing promising careers in Cairo and pushing the boundaries of what it meant to be a woman in the traditionally conservative Egyptian society.

One of the most famous performers of the era was Mounira Al Mahdiyya, a singer and actress who not only drew accusations of “corrupting morals and spreading vice” in society but attracted the ire of the British occupiers with her anti-colonial songs. Likely born in Zagazig in the late 19th century, Al Mahdiyya began her career as the first Egypt Muslim woman to perform on stage by fleeing her house to sing at the coffee houses and nightclubs of Cairo, where she often performed songs promoting the nationalist cause. Al Mahdiyya went on to found her own influential theater group and become the first woman to perform opera in Egypt. Despite the criticism from some areas of society, her work earned her a medal from the government for her work to revive Arab singing.

Another icon from the era was Syria-born Badia Masabni, who hit stages around Cairo to sing and act before becoming the founder of one of the most popular cabarets in Cairo at the time, the Sala Badia. At a time when belly-dancing was outlawed from Cairene nightclubs, Masabni became one of the most influential figures on modern oriental dance at her Opera Casino cabaret, creating new movements, popularizing new clothing, and incorporating different types of instrumentation. Her work led to the bridge between Zamalek and Giza being named the Badia Bridge, before it was renamed Al Galaa after the revolution in 1952.

International performers couldn’t resist its force: In the aftermath of World War I, European dancers and cabaret performers flocked to Egypt to establish careers in the growing industry. Eastern European women in particular left the wartorn continent to work as chorus girls in the dance halls of El Azbekkiya, one of the hotspots for late night entertainment in the city. One of the more famous nightlife figures from this wave of migrant performers was a European dancer named Dinah Lyska who went on to open her own place on Emad El Din Street named Bar Lyska.

American musicians even came to find a home in Egypt: Jazz musicians like Billy Brooks and George Duncan were some of those who chose to lay roots in Cairo after finding a mixture of success and racism while touring Europe as part of a minstrel show. The pair put together a group called the Devil’s Jazz Band and frequently performed at venues on Emad al-Din street in the early 20s initially with a rotating roster of Europeans living in Egypt and later with an Egyptian percussionist. Brooks and Duncan were part of a handful of African-American musicians who made Egypt their homes during the decade, fuelling a local jazz scene that became popular with locals and elite alike.

At the same time, fascination with ancient Egyptian culture abroad had taken hold: Shortly after the discovery of Tutankhamen’s tomb in 1922, Western obsession with ancient Egyptian culture went into overdrive. Fashion designers in London and the US were heavily inspired by the artifacts they saw emerging in the images in the foreign press and film companies began producing Tutankhamen films.