MENA still has a lot to do when it comes to governance and management, but Egypt seems like it’s on the right track 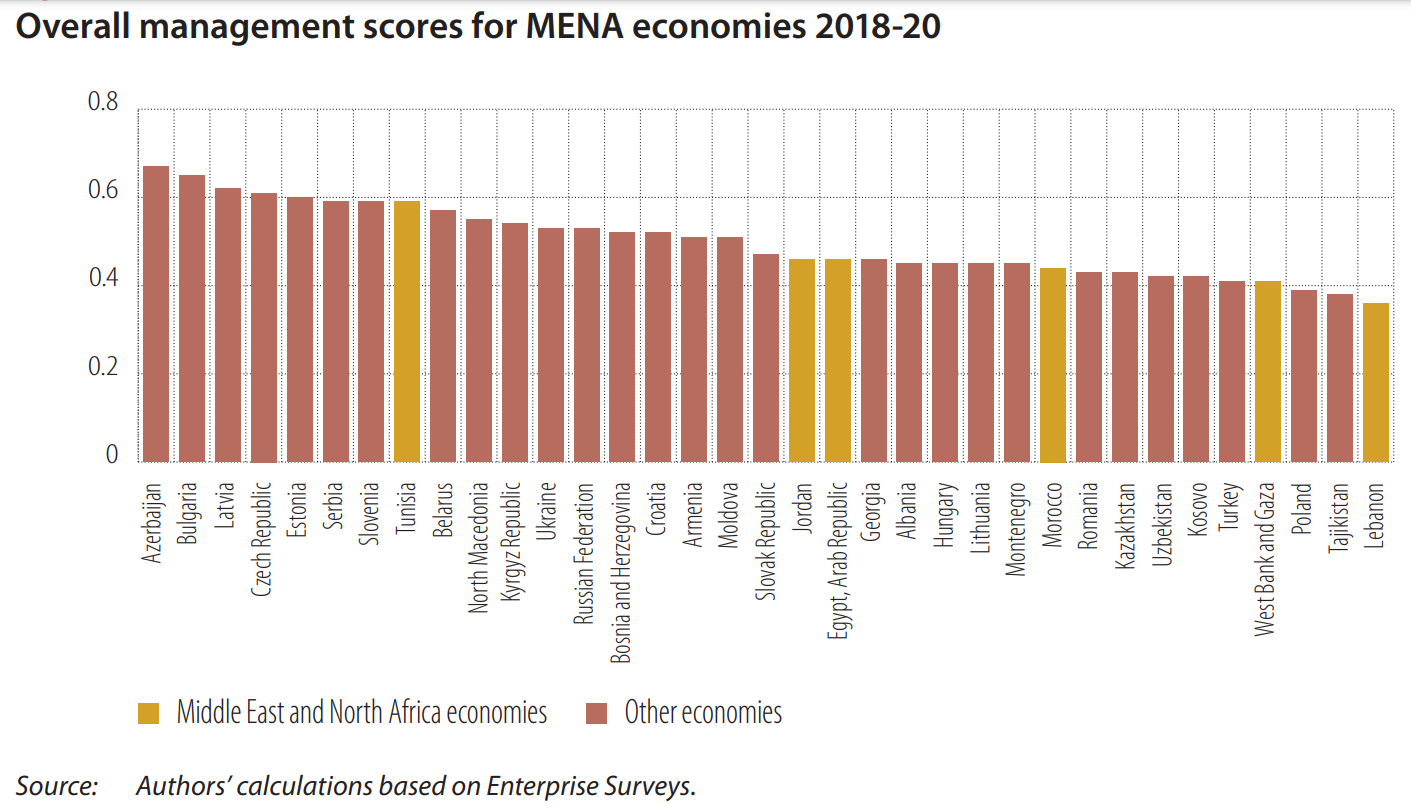 What is holding back Egypt and MENA’s business environment? A June report (pdf) by the EBRD, EIB, and World Bank looks at how to unlock the private sector’s potential in MENA. The Enterprise Survey (no relation to yours truly) looks at 5.8k formal businesses across six MENA economies — Egypt, Jordan, Lebanon, Morocco, Tunisia, and the West Bank and Gaza — between late 2018 and 2020. It looks at issues such as governance, management, trade and innovation, and access to finance to assess the region’s progress over the years and where MENA still struggles.

The top issues for businesses in Egypt and across the region: Across the nearly 3.1k Egyptian firms surveyed, tax rates were most cited as a top business obstacle (by some 24% of firms). Businesses in other economies in the region also cite tax rates as one of their top challenges, alongside a lack of access to finance.

That contrasts with the results of our annual reader poll: In 2018, the vast majority of businesses we polled cited inflation as the top challenge facing them, while finding and retaining talented employees took the lead as the biggest concern in 2019. In our most recent edition of the poll earlier this year, taxes were actually the smallest concern for businesses, with concerns over bureaucracy, supply chain issues, and talent retention eclipsing tax rates by a wide margin.

Governance has plateaued or declined in some countries in the region — but Egypt is improving: MENA countries’ governance standards have broadly remained stagnant or deteriorated in the last decade, according to the report. In Egypt, governance has been gradually improving since 2015, although the report suggests it was faring better back in 2009.

Businesses across MENA use connections and business associations to gain preferential treatment more frequently than in other regions, the report found. The data found correlations between firms with more connections, and factors that put them at an advantage — for example, more access to external finance.

Strong management is key to better business: “Management practices explain a major part of the gap in total factor productivity between countries,” the report says, as better managed firms have higher operating income, are more outward-oriented, and invest more in research and development. Every MENA country except for Tunisia came in the bottom half of 35 MENA and Europe and Central Asia (ECA) economies ranked for management practices. Egypt is in the middle of the rankings, while Lebanon was in last place. Azerbaijan, Bulgaria, and Latvia made it to the top three of the rankings.

Countries with a dominant public sector don’t do as well on management: The survey data showed a correlation between poor management practices in MENA and rates of partial government ownership. Public sector companies in the region sometimes choose managers based on connections instead of merit, according to the study, meaning “underperforming managers are less likely to be dismissed.”

That’s another reason to welcome the Madbouly government’s privatization program, which will see the state sell stakes in state-owned firms to local and international investors in a bid to fully exit dozens of sectors within the next few years. The plan aims to more than double the private sector’s role in the economy to 65% over the next three years, and attract USD 40 bn in investment over the next four years.

We were flagged as having the biggest issue with access to finance: About 69% of MENA firms in the study needing a loan were credit constrained, compared to 59% in ECA. But Egyptian firms are more credit constrained than businesses in any other country, with 90% of all companies in need of a loan reporting being credit constrained. Stringent collateral requirements, complex application procedures and high interest rates were cited as the biggest factors that discourage companies from applying for a loan.

But we’re working to improve that: Financial inclusion and SME financing have been a priority for the government in the past few years, particularly with the Central Bank of Egypt’s financial inclusion and SME lending mandates to banks, and its continued recommendations on how to aid small businesses to obtain financing. International institutions like the EBRD are also providing more financing packages to Egyptian banks to on-lend to SMEs.