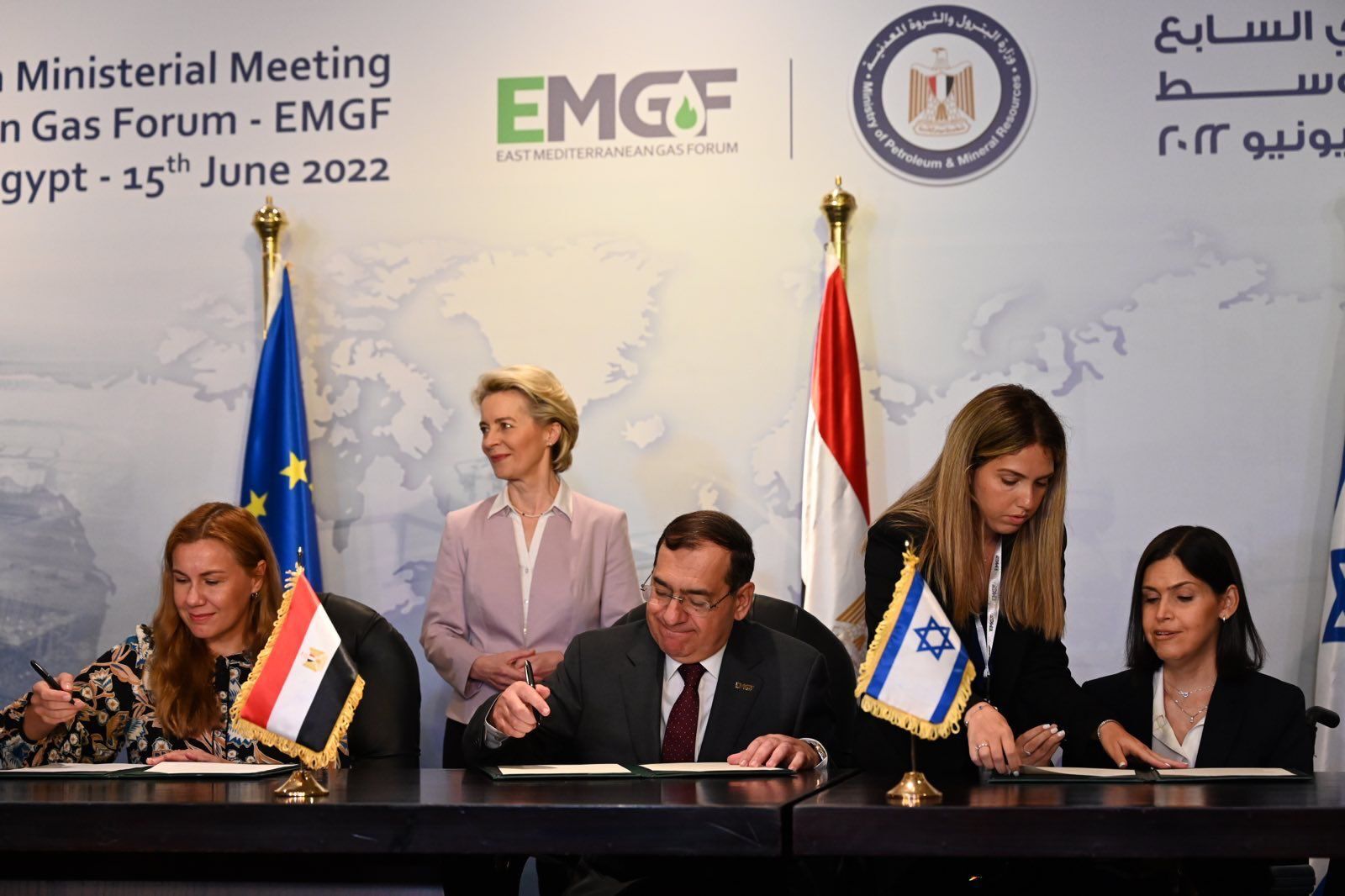 A big day for our gas hub ambitions: Egypt and Israel will increase gas exports to the EU under an MoU (pdf) signed in Cairo yesterday that comes as the continent looks to phase out its reliance on Russian fossil fuels. The agreement will see Israel send more gas to Egypt’s LNG facilities before exporting it on tankers to European shores. “We want to diversify to trusted suppliers and Egypt is a trustworthy partner,” EU Commission President Ursula von der Leyen said at a joint press conference alongside President Abdel Fattah El Sisi (watch, runtime: 17:24). “This is a big step forward in the energy supply to Europe but also for Egypt to become a regional energy hub.”

A nine-year agreement: The MoU will run for three years and will be renewed automatically for another two three-year periods.

What else we know: The agreement will see the three sides work together on the “efficient utilization” of infrastructure to increase gas shipments to the EU, as well as reduce methane emissions and explore carbon capture projects. Brussels will “endeavor to encourage” European energy companies to increase investment in gas exploration and production in Egypt and Israel, and bid in tenders.

And what we don’t: The agreement doesn’t contain any commitments regarding export volumes or investment. A draft document picked up by Reuters last week suggested that the EU could help finance new energy infrastructure.

What they said: Speaking on Ala Mas’ouleety last night, Oil Minister Tarek El Molla said it was an “important day” for Egypt’s sector, and that the agreement positions the country as a “key gas corridor” in the Eastern Mediterranean (watch, runtime: 4:12). EU Energy Commissioner Kadri Simson and Israeli Energy Minister Karine Elharrar both described the pact as “historic.”

Here’s where additional EU financing could be crucial: Egypt is looking to build new LNG terminals and pipelines to increase capacity and export volumes, including a link to Cyprus’ Aphrodite gas field which the countries are expected to start constructing later this year, and a potential direct pipeline to Greece.

How much we’re exporting currently: Egypt shipped 8.9 bcm of LNG in 2021 and 4.7 bcm in the first five months of this year, according to Refinitiv data picked up by Reuters.

The EU expects to increase exports this year: The Commission now expects to purchase 7 bcm from Egypt this year, up from 5 bcm, the Financial Times reports a spokesperson as saying.

But it wasn’t immediately clear how Egypt could increase shipments in the short term, given the lack of commitment to new infrastructure and the traditional lull in exports during the summer months. El Molla said recently that without additional investment it could take two or three years before it is able to increase exports.

The signing coincided with a meeting of the East Mediterranean Gas Forum (EMGF), which brought together officials from the eight founding countries, as well as observers the EU, the US and the World Bank. The agreement will lead to further cooperation between members of the forum, which includes Jordan, Israel, Cyprus, Greece, Egypt, the Palestinian Authority, France and Italy, El Molla said.

Eni is in talks to ramp up gas imports from Egypt to Italy and the rest of Europe, as Rome seeks more alternatives to Russian energy, Bloomberg reports, citing people familiar with the matter. The new agreement would see Eni and Egypt add capacity for export to Italy — beyond the levels agreed in an earlier agreement — within the next two years.

This came as Gazprom reduced gas supply to Eni in what Germany yesterday called a “political” move. The Italian energy giant reported yesterday that flows had fallen by 15% and that the Russian company did not explain why. Tuesday’s disruption through the Nord Stream pipeline that supplies Germany also worsened yesterday after Gazprom said it would cut flows flows by 60%. The company blamed Siemens for malfunctions at one of its pumping stations but Berlin called it a “pretext” to “drive up prices.” European benchmark prices rose 22% to EUR 118 per MWh on the news. Bloomberg and the FT have more.

Egypt + Lebanon need to finalize gas pact terms: The US will assess if a plan to ship natural gas to Lebanon via the Arab Gas Pipeline would violate sanctions on Syria after terms are agreed between Cairo and Beirut, Reuters reported, citing an interview with US energy security envoy Amos Hochstein. “We’ve given pre-approval for the project and as soon as Egypt and Lebanon can agree on the terms, which hasn’t happened yet, then we can evaluate the project,” he said.

ALSO FROM THE MEETING- Egypt and the EU are partnering on hydrogen: “Egypt has the potential to become a leader in renewable energy production and export,” von der Leyen said, adding that the EU wants to explore ways to “put the infrastructure and technologies in place” to expand the renewables sector. The two sides are gearing up to launch a regional hydrogen partnership and sign agreements on green hydrogen and ammonia production during the COP27 summit in November.