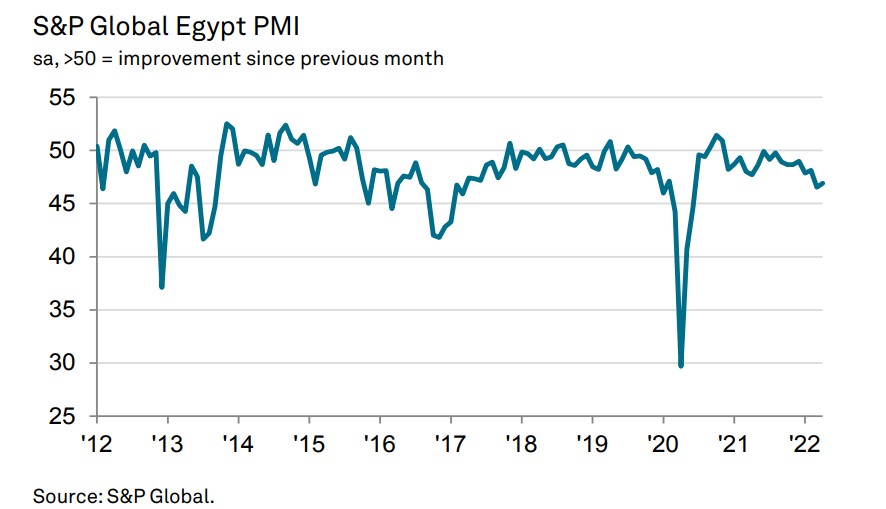 Egypt’s non-oil private sector continued to contract in April, buffeted by inflation that has been turbocharged by the war in Ukraine as well as by falling demand, according to the S&P Global purchasing managers’ index survey (pdf). Business activity contracted at a slightly slower pace during the month, with the index inching up to 46.9 from 46.5 in March — but remaining below the 50.0 mark that separates expansion from contraction. The index reflected “a solid deterioration in business conditions” that was the second-fastest in almost two years.

November 2020 seems a long time ago: This is the 17th consecutive month Egypt’s non-oil private sector has been in contraction since mounting a brief recovery from the shock of covid in 2020.

What they said: “Non-oil business activity in Egypt continued to fall sharply in April as businesses faced a further increase in material and energy costs due to the war in Ukraine and a devaluation of the EGP in late-March,” said S&P Global economist David Owen.

Inflation remains key: “Despite softening marginally, the rate of overall input price inflation was strong and remained above the average seen in 2021,” S&P Global said. Inflation almost doubled during 1Q 2022, reaching a near three-year high of 10.5% in March.

Employment saw its sharpest drop in a year, with firms holding back from making new hires as rising prices dented client demand.

Manufacturers continue to bear the brunt of adverse conditions: “Manufacturers remained the most exposed to these setbacks, with increased raw material prices and supply shortfalls leading to a solid cut in goods production.” Wholesalers and retailers also continued to feel the strain.

On the bright side: Construction activity and new work increased for the first time this year.

The outlook: more of the same. While confidence picked up from an all-time low in March, businesses expect price and supply issues to persist as the war continues, “resulting in another relatively downbeat outlook for business activity," Owen said.