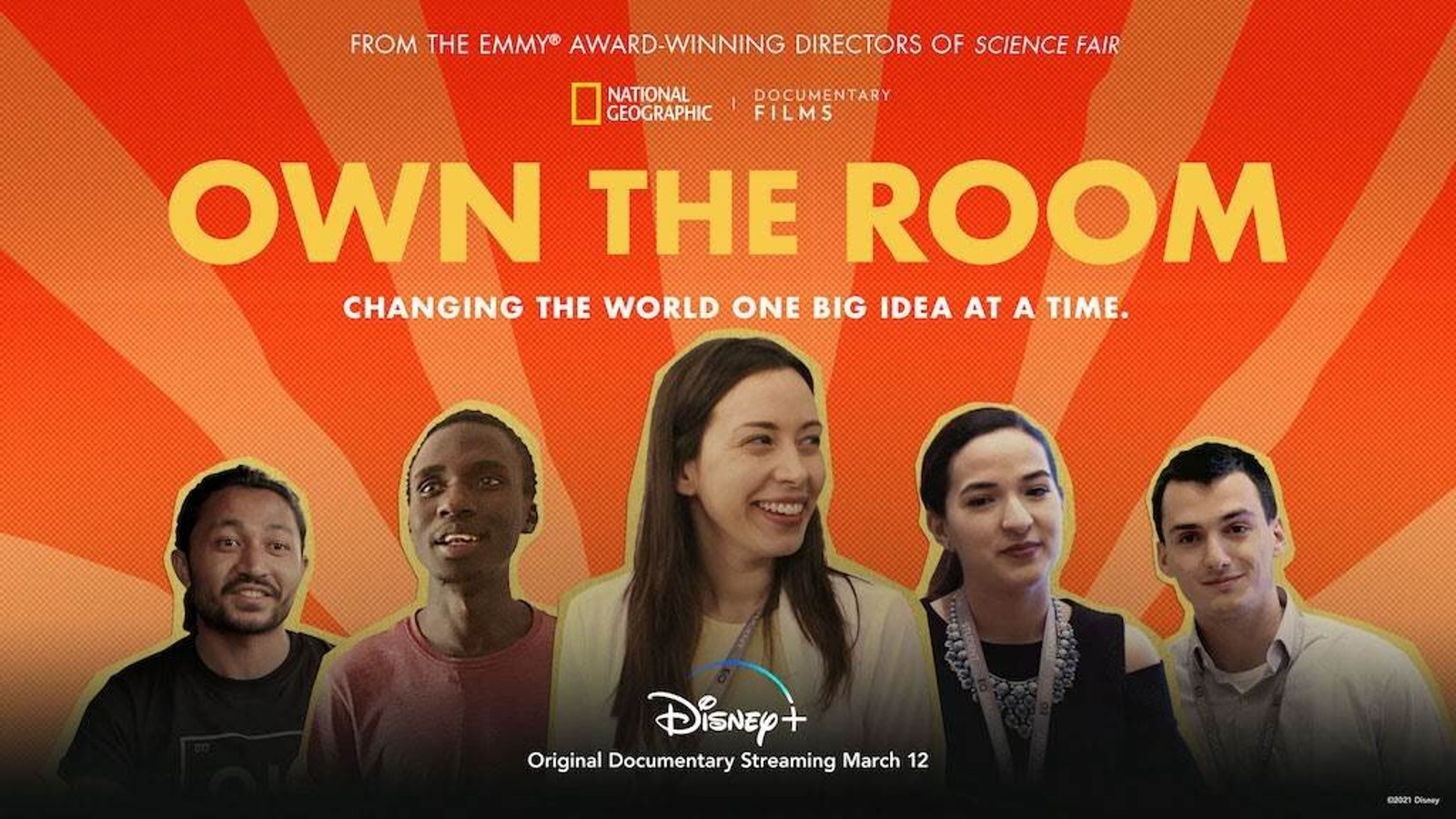 WHAT’S NEXT- The National Geographic film Own the Room follows five students competing for the Global Student Entrepreneur Awards: The series inspires hope for the future as you watch these young minds think up brilliant ideas despite their difficult personal circumstances. The first third of the film introduces each student and their background, really building up the audience’s connection to each contestant and giving you a feel for the source of their motivation. Most of the students have been displaced from other countries, but their immigrant status has not deterred them from aiming to help the world, sometimes inspiring them to solve problems in their original place of residence. The viewer then follows them as they travel to China for the global competition and, in the case of a young African boy, facing discrimination at the airport. Nonetheless, they all make it to finally pitch their startup ideas in front of a panel of judges. If you’re anything like us, you might just get emotional as you watch them “own the room” and convince you that there’s still a generation pushing for change.

⚽ Group E and Group F are up tonight in Afcon: The former will see Sierra Leone play against Equatorial Guinea and Ivory Coast play against Algeria, both at 6pm. Meanwhile at 9pm, the four Group F contenders will all hit the field: Gambia vs. Tunisia and Mali vs. Mauritania.

Egypt next play on Wednesday, 26 January. We’ll take on whoever tops Group E in the final 16. Group E is still wide open, and any of Ivory Coast, Equatorial Guinea, or Sierra Leone could top the group. So pay close attention to tonight’s matches.

(Algeria cannot top the group, as we mistakenly said this morning. H/t to eagle-eyed reader Amr L. for the note.)

Egyptian League Cup: Pyramids is currently playing Al Masry and Eastern Company is taking on Al Ittihad as we dispatch. Later at 5pm, Misr Lel Makassa and Future will play a match. Among tomorrow’s matches is Al Ahly versus Al Mokawloon at 5pm while Saturday will feature El Zamalek competing against Ghazl El Mahala at 5pm.

La Liga: Getafe will play against Granada at 8pm tonight while Espanyol will face Real Betos at 10pm tomorrow. Matches will pick up speed on Saturday as Levante faces Cadiz at 3pm, Villareal plays Mallorca at 5:15pm, Sevilla plays Celta Vigo at 7:30pm, and finally, Atletico Madrid kick off against Valencia at 10pm.

Serie A: Verona take on Bologna tomorrow at 9:45pm in the sole match of the day. Meanwhile, matches on Saturday include: Genoa vs. Udinese at 4pm, Inter vs. Venezia at 7pm, and Lazio vs. Atalanta at 9:45pm.

Six matches to tune into in the EPL this weekend: Watford and Norwich city will hit the field tomorrow at 10pm before Super Saturday kicks in full steam starting with Everton playing against Aston Villa at 2:30pm. At 5pm, Brentford will face Wolves, Leeds United will face Newcastle, and Man United will face West Ham. Ending the day are Southampton and Man City who will compete at 7:30pm.

Coppa Italia: Roma and Lecce will play today at 10pm in the last cup match this month.

Copa Del Rey: Elche will compete against Real Madrid tonight at 8pm while Athletic Club will face Barcelona at 10:30pm.

What’s been happening in the transfer market? The January transfer window didn’t see a lot of the exciting rumors materialize so far, with less than two weeks until it closes. Some of the updates until now include Philippe Countinho joining Aston Villa on loan and showing a stellar performance during his first match with the team. Aston Villa also signed Everton left-back Lucas Digne for GBP 25 mn. Meanwhile, it was a shock when 30-year-old Italian national team star and Napoli winger Lorenzo Insigne decided to leave Europe — the hub for international football — signing with Toronto FC on a four-year contract. Newcastle went on a shopping spree after the team’s Saudi acquisition, signing Kieran Trippier and Chris Wood, soon earning the team an “overspending” transfer warning, reports Chronicle Live. Finally, Anwar El Ghazi — who has a market value of EUR 10 mn — has moved to Everton on loan.

Everyone will find something they like at Ni: The restaurant brings the very best of Italian and Japanese cuisine with a diversified menu that still manages to bring high quality dishes no matter what you order. They have a great selection of pastas and sushi as well as a smattering of essential international dishes such as burgers and chicken strips. Start off your meal with their mixed focaccia, crispy spicy tuna, or truffle fries. If you’re going the Japanese route, try out their poke dishes; if you’re leaning towards Italian, Ni’s tagliatelle alfredo and mushroom risotto are not to be missed. Finally, dessert is highly recommended at Ni — their pain perdu is an experience, as are their crepes. You can find Ni on both ends of the city: Park St. Mall in Sheikh Zayed and 5A by the Waterway in New Cairo.

Cinematic film forum MedFest will kick off today in Downtown. The festival features workshops, round tables, lectures, master classes, and films from all over the world that will be shown at Zawya Cinema, Goethe Institute, and Consoleya. The event will run until Sunday.

Medrar is screening two groundbreaking VR films by Emmy award winning artist Yasmin Elayat on Saturday, Sunday, and Monday from 1-6pm. The films, The Changing Same and Zero Days, are documentaries that can be experienced with VR glasses to give a fully immersive experience. On Sunday, Elayat will be on location to give a talk on her filmmaking experience.

The Pitch will take you into a room full of investors: Each episode of the Gimlet podcast features an entrepreneur that will soon pitch their idea to a number of investors. The podcast aims to show “how people sell their ideas, what makes investors tick, and how these initial conversations can bloom into business agreements — or die on the vine.” While the concept isn’t new, The Pitch is a refreshing take on the format, focusing more on the story behind these entrepreneurs’ companies as opposed to the shock value seen on TV shows such as Shark Tank. It also offers a realistic depiction of investors, who might sometimes focus on negligible aspects of a business or change their mind before writing a cheque. Newer episodes also delve into the makings of the VC world and how covid-19 has disrupted the investment climate.

An expose on the bn’aire class and how they “devoured the world”: Journalist Peter S. Goodman draws on decades of covering the global economy to write his new release Davos Man. The book looks at how the world’s most affluent segment have exploited the pandemic to further expand the wealth centralization that has put them so far at the top, no one else can reach them. Goodman profiles five members of the bn’aire class, whom he calls Davos Men, to show their hidden impact on nearly every aspect of modern society. He covers everything from widening wealth inequality, wage decreases, and unequal taxation all the way to the rise of anti-democratic nationalism and the vulnerabilities of our health-care systems. Goodman creates a well-rounded book in the sense that he allows voices from every class to chime in with their experiences, showing how the decisions and policies enacted by these bn’aires have affected an African immigrant in Sweden or a Seattle doctor fighting covid-19.