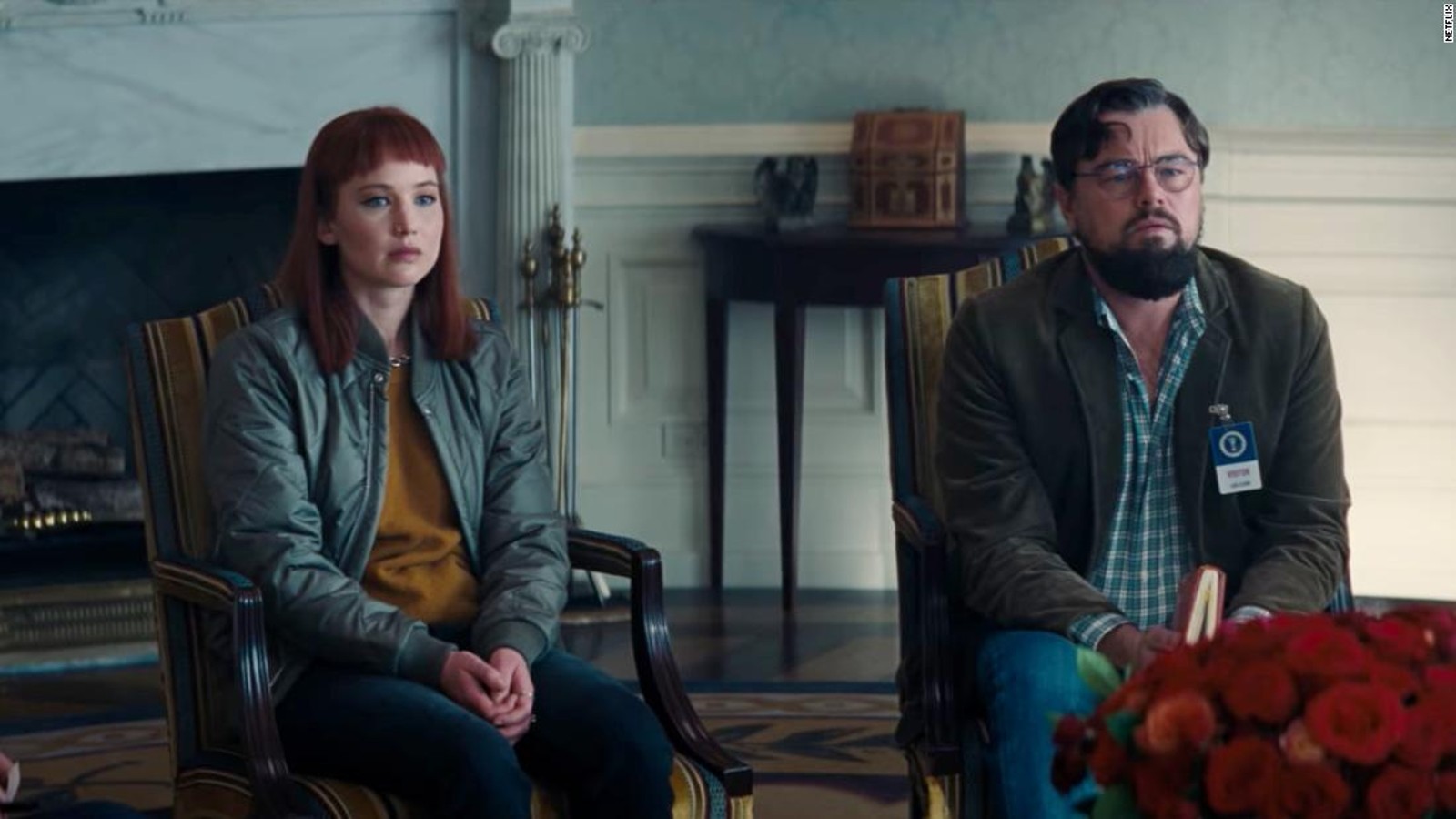 Netflix’s Don’t Look Up features a star-studded cast and a comet plummeting towards Earth: Directed by Adam McKay — who is known for The Big Short — the film follows two astronomers (played by Leonardo DiCaprio and Jennifer Lawrence) after coming to the harrowing discovery that a huge comet is headed towards Earth and could erase humankind’s existence. The pair quickly start at the top and inform the president (played by Meryl Streep) and her chief of staff (hilariously brought to life by Jonah Hill), but the leaders brush them off with politician speak and fail to give the matter any urgency. This is the theme that continues throughout the film as DiCaprio and Lawrence go through increasingly unorthodox channels to get literally anyone to care about the possible end of the world — even going as far as to appear on a kids’ show. In a clear pointing of fingers at capitalist greed, people only start to give the comet any attention when they judge its potential to be lucrative.

The film acts as a satirical reflection of similar events taking place today, with a majority of the world’s population turning a blind eye when it comes to climate change, writes The Wrap (warning: spoilers). Don’t Look Up also captures the general sentiment of the pandemic, where people are so exhausted with events out of their control that they opt to focus on trivialities and ignore the consequences of their neglect.

⚽ There are no matches to tune into today but there’s potential transfer chatter: Arsenal may be tapping Real Sociedad striker Alexander Isak after reportedly urging European clubs to sign Pierre-Emerick Aubameyang, according to EuroSport. Meanwhile, Romelu Lukaku could don Chelsea’s jersey once again after positive talks with head coach Thomas Tuchel and Paul Pogba wants to be on the same team with Karim Benzema, with no definitive plans just yet.

Texas BBQ for days at Dickey’s: Located inside City Centre Almaza, it’s the perfect place for someone who is a meat (or chicken or sausage) lover. Dickey’s is known for their hickory-smoked brisket, which is featured in a variety of plates, appetizers, and sandwiches. Because we like to try a bit of everything, we had their old school plate with brisket and beef sausage and sides of mac & cheese and sweet corn (their creamy spinach is also great). We were glad to discover that the brisket was well seasoned and tender — and everything else was just as delicious. We’re also a fan of their sandwiches, especially their Texas hot brisket, their barbeque ranch bird, and their wild westerner. Don’t leave without trying their pecan pie — we always appreciate the (rather rare) chance to enjoy the pie in Egypt.

The Darkroom Cairo is organizing a workshop titled “Experimental Printing with Old Negatives” on Saturday at 5pm. The workshop will see students combine archive negatives with photograms or other materials they can bring with them such as flowers or leaves.

AUC Press released an English translation of Ihsan Abdel Quddous’ novel “I Do Not Sleep”: Translated by Jonathan Smolin and published by Hoopoe, the novel was a shock to readers upon its release in the 1950s for portraying strong women characters and going against patriarchal norms, according to a press release (pdf). Abdel Quddous wrote the book in the form of a letter filled with confessions from the main character Nadia who reflects on her actions in the past five years. Raised by her father after her parent’s divorce, Nadia is determined to make sure she is the only woman in her dad’s life. However, when she finds out he remarried without her knowledge, she conspires an elaborate and revengeful plot that will soon cause the family to descend into tragedy and destruction. The novel was adapted into a film by the same name in 1957, starring Faten Hamama.