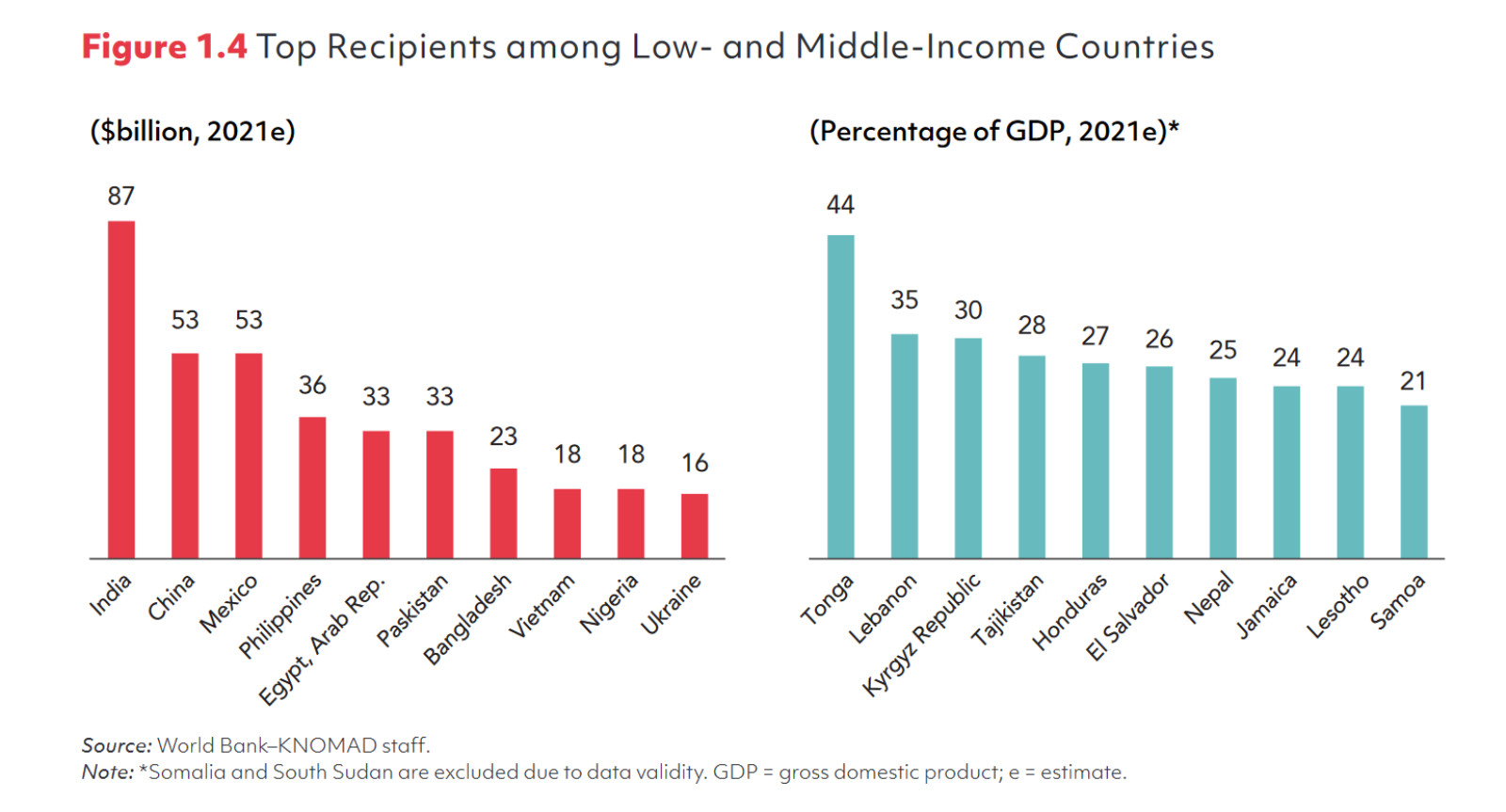 Remittance inflows to Egypt are on course to hit a record high this year as higher oil prices and the global economic recovery fuel an increase in transfers. Transfers from Egyptians abroad are projected to increase almost 13% to USD 33 bn this year, making Egypt one of the world’s top five recipients of remittances in USD terms, the World Bank has said in a new report (pdf).

Best in class: Egypt will have by far the largest remittance inflows among developing countries in the MENA region, according to the bank’s projections. Accounting for 54% of total inflows, the “surprisingly strong” transfers into Egypt are expected to help regional remittances rise almost 10% this year to USD 62 bn, the report says.

Part of a global trend: The World Bank is now projecting global remittance flows to rise 7.3% this year to reach USD 589 bn. “Remittance flows from migrants have greatly complemented government money transfer programs to support families suffering economic hardships during the covid-19 crisis,” said Michal Rutkowski, the World Bank’s global director for social protection and jobs, in a statement. “Facilitating the flow of remittances to provide relief to strained household budgets should be a key component of government policies to support a global recovery from the pandemic.”

Behind the rise in global inflows: “Drawdown on savings by migrants, greater use of official channels for remittances (both due to less physical travel and fintech payment innovation), access to [monetary] handouts in host countries, and a stuttering loosening of prior covid-related lockdowns,” Hasnain Malik, chief equity strategist at Tellimer Research, wrote in a note last week.

But Egypt is also benefiting from other trends: The rebound in oil prices this year has helped to boost transfers from GCC countries, where the vast majority of Egyptian expats are based, the World Bank said. The rebound in economic activity in the US and Europe has also fueled inflows.

Don’t take these figures as gospel: There remains a risk that Egyptian remittances could fall short of these projections after several GCC countries announced that they would bar unvaccinated people from entering their countries. 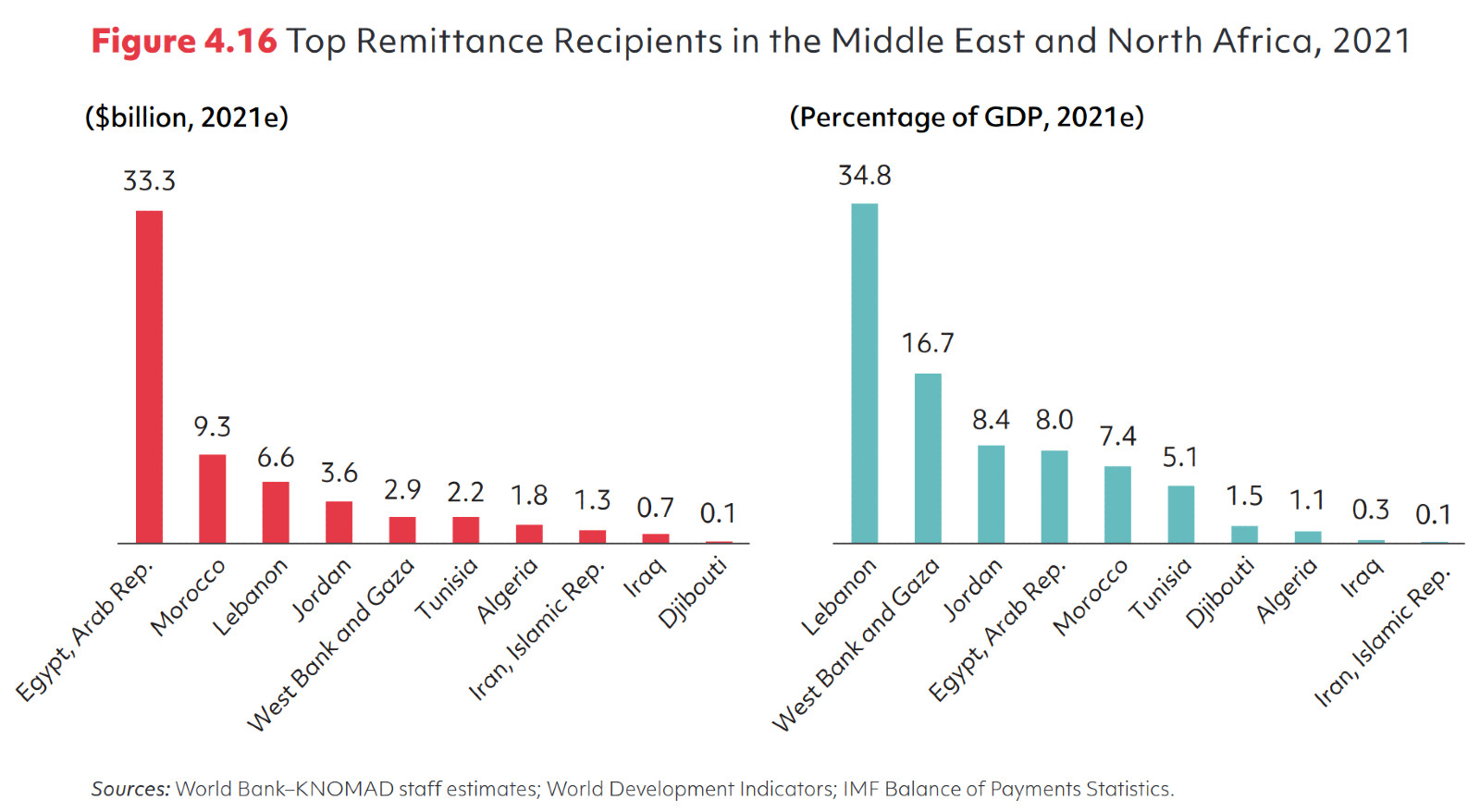 A vital stop-gap: Remittances have been vital over the past two years to make up for the covid-induced slump in foreign direct investment, and for the second consecutive year remittance flows to low- and middle-income countries are projected to exceed FDI. Remittances are expected to account for 8.4% of Egypt’s GDP by the end of 2021, according to the World Bank, which says they are “of paramount importance” to bringing in foreign currency following the collapse in tourism revenues and flat-lining FDI.

A huge tourism-shaped hole: The increase in transfers has plugged some of the shortfall in tourism revenues caused by the shutdown of international travel. Before covid, tourism revenues were one of the country’s principal sources of foreign currency and the sector accounted for around 12% of GDP. In 2020 proceeds collapsed by two-thirds to just USD 4.4 bn, and though the industry has begun to recover this year with the gradual normalization of travel, revenues remain far below pre-pandemic levels.

Remittances > FDI: Though the value of remittances have long exceeded FDI in the country’s balance of payments, the two have been moving in opposite directions over the past two years, with incoming investment falling as transfers have risen. The USD 29.6 bn in remittances received last year dwarfed FDI, which came in at just USD 5.85 bn. During the first six months of 2021 Egypt received USD 15.9 bn in remittances, while net FDI registered just USD 1.85 bn.

Coming in 2022: The World Bank is forecasting transfers to Egypt and the rest of North Africa to slow to 3% in 2022 after rising 8.6% this year in anticipation of OPEC adding more crude supply to global markets, causing a slip in oil prices. Globally, flows will increase by a more moderate 2.6% next year, the report said.

Covid or no covid, flows could temper next year: A resurgence in covid cases is the obvious risk going forward, though Tellimer’s Malik says that inflows could be hit either way. The economic consequences of a serious covid flare-up poses a risk to remittance flows, but the continued relaxation of travel restrictions could also hit inflows as more people resume traveling with banknotes instead of using digital payment systems.