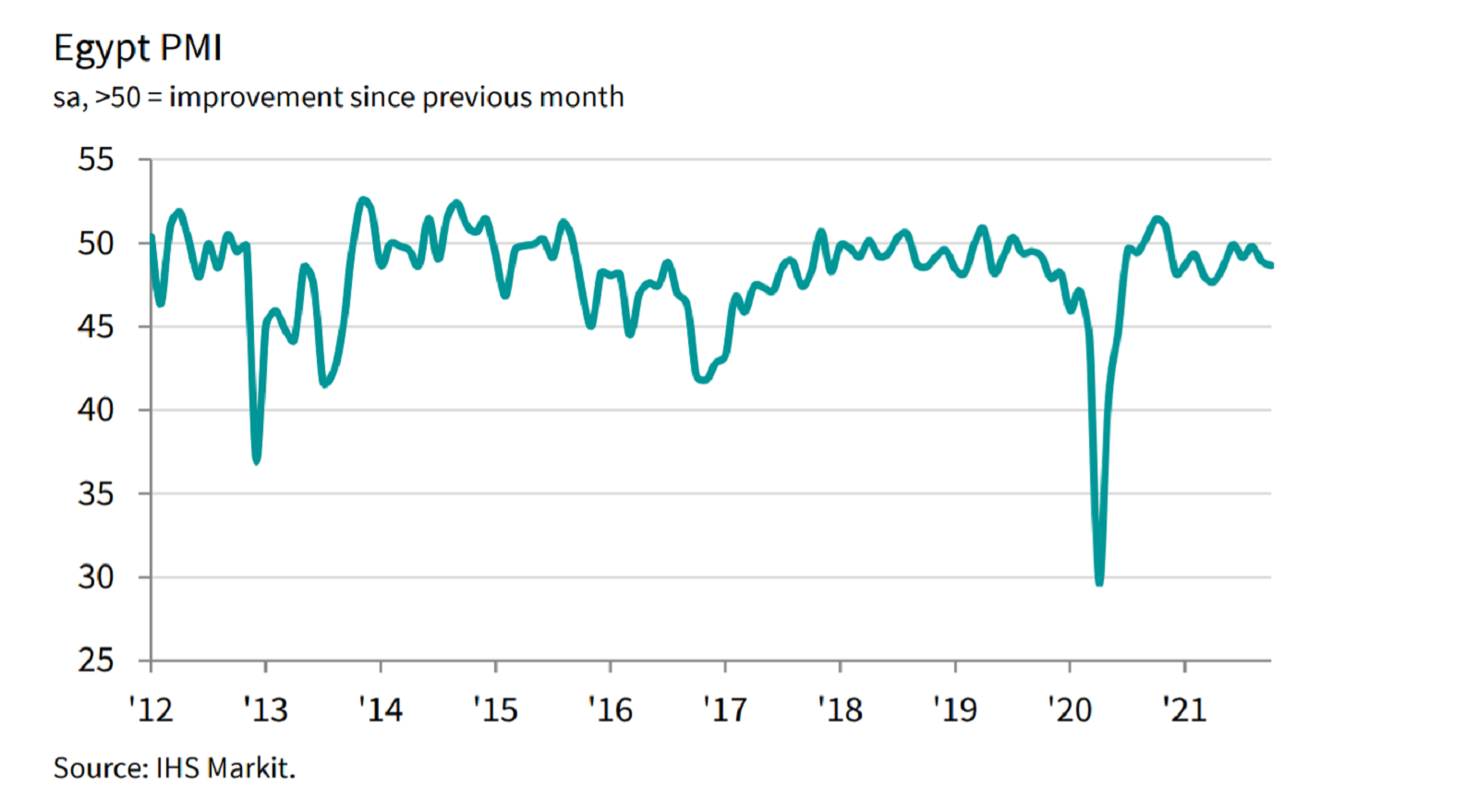 Private sector activity dips to five-month low: The contraction of non-oil private sector activity in Egypt deepened in October as continued supply chain disruptions abroad caused input costs to rise at their quickest pace in over three years, the IHS Markit Purchasing Managers’ Index (PMI) (pdf) showed yesterday. The index inched down to a five-month low of 48.7 from 48.9 in September, marking the 11th consecutive month that the index has been below the 50.0 mark that separates growth from contraction.

The Great Global Supply Chain Snarl is starting to weigh on businesses: Worsening global supply chain bottlenecks were to blame for the dip, as a lack of materials saw companies forced to scale back output and up their input buying to cushion themselves from future supply gaps. “Having previously been less impacted than Europe and other regions, Egyptian firms started to feel the burden of material shortages on both output and inventories, with the latter decreasing at the sharpest rate in 16 months,” said David Owen, economist at IHS Markit.

Prices rose across the board: “Inflationary pressures were spread across a vast array of inputs, including metals, plastics, wood products and construction materials, plus rising freight costs,” Owen said.

The result: Input costs and output charges accelerated at their quickest rate since August 2018.

Egypt’s headline inflation rate has been ticking up in recent months and hit a 20-month high of 6.6% in September amid rising food and energy prices. The headline rate remains within the CBE’s target range of 7% (+/-2%), and many analysts predict prices to stabilize come next year.

We could be in for a rocky few months: Materials shortages will likely lead to further output reductions by the end of the year, IHS Markit says. Where inputs are available, they will be more expensive — and that cost will be passed onto consumers in part. “This suggests that businesses and consumers will struggle to avoid price rises in the months to come," Owen said.

Rising commodity prices will also make their mark over the coming months: The government’s decision last month to hike the cost of natural gas for manufacturers and gasoline prices for motorists will fuel further inflation. Fertilizer and chemicals producers could raise their prices by up to 20% to protect their operating margins. And the government is preparing to cut back on bread subsidies for the first time in decades as rising international wheat prices put pressure on the state budget.

The supply chain crisis hit exports as well: Foreign orders fell at the fastest pace in 17 months, continuing a downward trend from September.

The private sector doesn’t expect supply chain disruptions to end anytime soon: Business confidence plummeted from September’s record high last month, with output expectations falling 20 points to their lowest level since April. The tumble in confidence reflects increasing concern over the possibility that inflation could last long enough to inflict real damage. “Firms were particularly concerned that high inflation could lead to a slump in demand and reverse the economic recovery seen since COVID-19 restrictions were eased,” IHS Markit said.

On the bright side: Employment is up for the fourth consecutive month, although backlogs of work are piling up for the third time in four months due to input shortages. And despite all the inflationary doom and gloom, we’re still above our PMI series average, which is the total average of PMI scores we’ve earned since 2011.

And demand is going relatively strong — for the time being. Thank tourism: New orders dipped only marginally on the back of weak exports, saved by a rebound in local sales. Local tourist hotspots in particular are seeing a revival after covid-19 restrictions had almost halted their operations.

ELSEWHERE IN THE REGION- Saudi Arabia’s PMI (pdf) slipped slightly from last month’s reading of 58.6, but output levels expanded at a record rate. The Gulf state logged its second-highest reading since the start of covid-19. Purchase price inflation rose to an 11-year high amid the supply chain crunch.

Dubai Expo 2020 drove the UAE’s business growth up to a high not seen since June 2019 as PMI (pdf) surged to 55.07 in October, up from 53.3 in September. The event, which helped drive a rise in spending and a spike in tourism, also boosted output levels at the strongest rate in over two years.