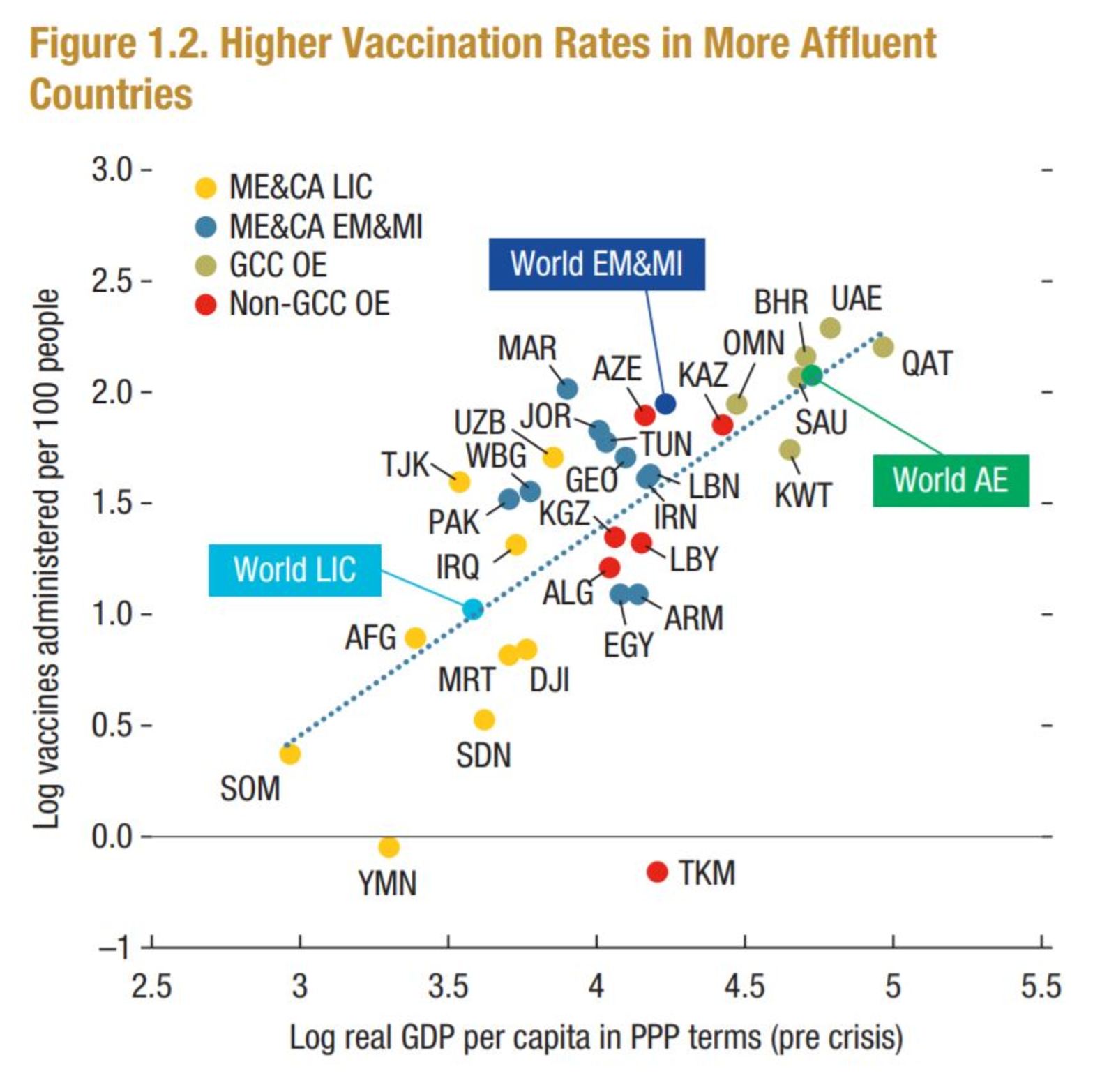 The post-covid recovery in Egypt and MENA continues to be “uneven and incomplete” with countries that had made strong progress in vaccination (including Joran, Morocco and Tunisia) likely to recover quicker than those with more sluggish rollouts, like Egypt, the IMF said in its latest Regional Economic Outlook (pdf). Though the report says we’re making progress on economic growth and employment, we lag the GCC countries in vaccine rollout — and can eventually look forward to lower debt levels than before the pandemic, the IMF said.

The IMF revised its 2021 growth expectations for MENA slightly upward to 4.1% from 4% in its most recent update in April. The fund also sees GDP expanding at the same clip in 2022, which is also a slight upward revision from a previous forecast of 3.7% for next year. Both forecasts are a sharp rebound from last year’s 3.4% contraction across the region. Inflation in MENA, meanwhile, is seen rising to 12.9% this year on the back of sharp increases in food and energy prices before stabilizing at 8% in 2022.

Egypt is making progress on employment: “Although a few countries appear to have seen a strong rebound in the second half of 2020 and the first quarter of 2021 (such as Egypt, Kyrgyz Republic, and Uzbekistan) … employment in most countries remains below its pre-pandemic levels,” says the IMF.

But headwinds remain: Egypt is among the countries with a slower-than-average pace of vaccinations, according to a figure in the report plotting the doses administered on a log scale (pictured above). The Health Ministry recently said that some 13 mn people in the 100 mn-strong country have received at least one dose of a vaccine. Most GCC countries on the other hand have reportedly reached 40% vaccination rates and expect to get to 70% by the end of 2021, the IMF says.

And MENA financing needs remain high: Gross government debt for oil importers in MENA, which include Egypt, has risen significantly throughout the pandemic, the report said. This has led to a nearly 50% upward tick in “gross financing needs during 2021-2022” to USD 390 mn compared to 2018-2019.

Aggregate debt in MENA is also expected to tick up to 91.7% of GDP by the end of the year, up from 86.8% in 2020. The figure is then projected to gradually drop between 2022 and 2026, to eventually reach pre-crisis levels by 2023, the IMF said. Debt levels are projected to end up lower than they were pre-pandemic in countries including Egypt and Jordan, and higher in countries including Tunisia due to “divergent dynamics across countries over the medium term,” the fund noted.

The IMF’s regional outlook update comes a few days after the lender released its updated World Economic Outlook, which said that inequality in the post-pandemic era is the most pressing threat to recovery, and pointed to the widening divide between developed and developing economies.

Other issues raised in the regional report: