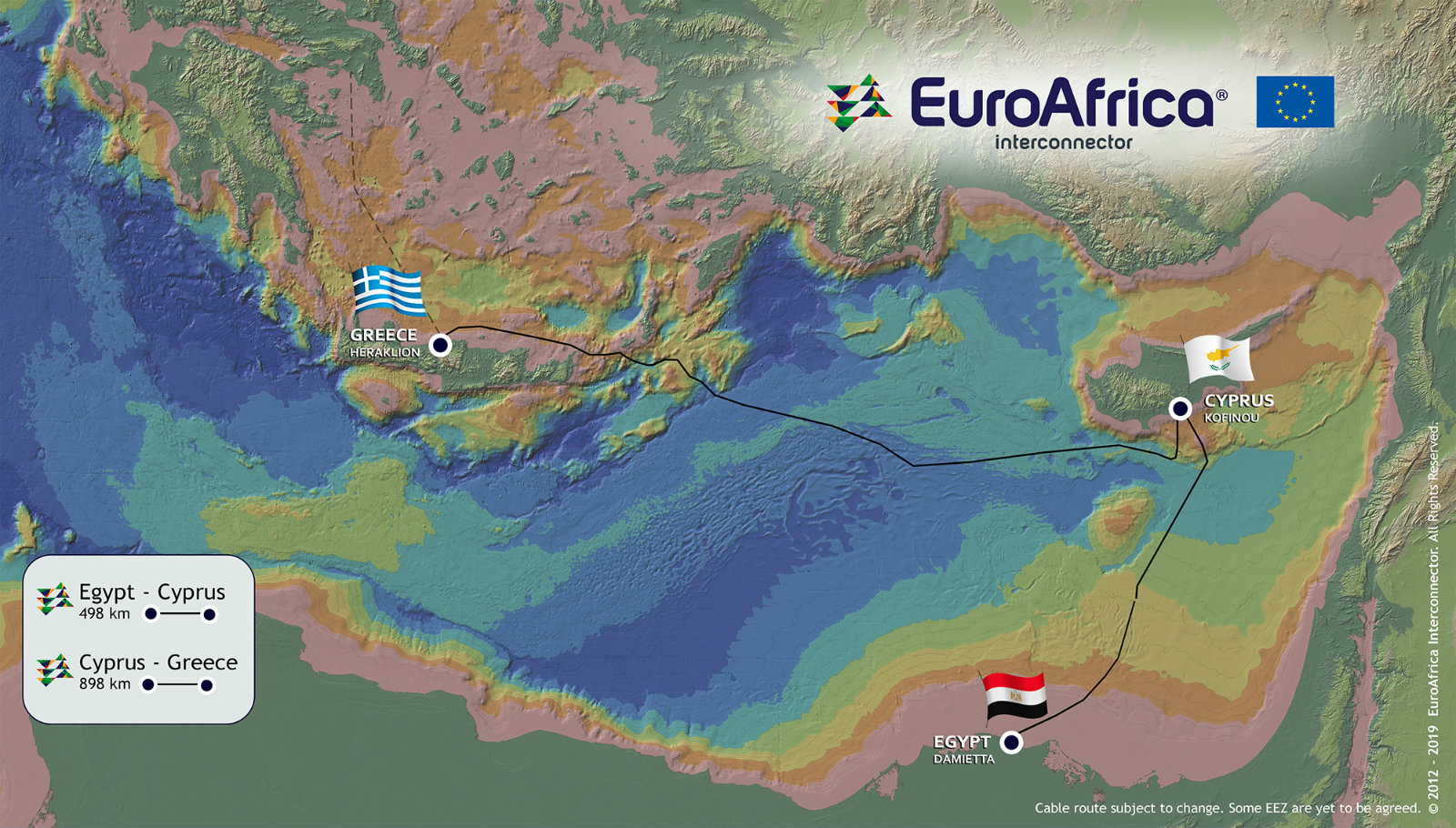 Egypt and Greece are set to agree on building an undersea cable through which Egypt will export surplus electricity to Greece, with the two countries set to sign an MoU in Athens later today, a Greek Energy Ministry official tells Reuters. The subsea cable comes as part of the USD 4 bn EuroAfrica Interconnector project, which will connect the electrical grids of Egypt, Greece, and Cyprus. The project comes as part of Egypt’s ambitions to become a regional energy hub and exporter of green energy to Europe. Egypt, which has committed to producing 42% of its electricity from renewables by 2035, produces an excess of solar energy, which is notoriously hard to store.

What’s the progress on the linkage so far? The first, EUR 2.5 bn phase of the project will connect the three countries’ grids and is set for commissioning by December 2023 with an initial capacity of 1 GW. The project has been in the works for a while, as Cairo, Athens, and Nicosia signed the framework agreement back in 2019. The project comes at a time when Europe is experiencing the first (but certainly not last) renewable energy crisis in the renewable energy transition.

OTHER ENERGY NEWS- Egypt’s LNG exports are set to rise this month compared to September, as shipments from the Idku liquefaction plant and the recently-revived Damietta plant ramp up, industry insiders told Reuters yesterday. Five shipments have already sailed so far into the month, with a vessel currently loading at the Idku plant, and another due on 16 October, according to data intelligence firm Kpler. The intelligence firm expects three shipments to leave each of the Idku and Damietta plants in the first half of October, compared to a total of five during the entire month of September. The increase also owed to a sell tender recently launched by state-owned EGAS for shipment on 31 October.

The numbers: The country exported a record 4.3 mn tonnes of LNG in 9M2021, up from only 0.45 mn tonnes a year earlier, thanks to an improvement in local supplies and in the pricing environment, a Kpler analyst told Reuters. Egypt exported 1.4 bn tonnes in 2Q2021, compared to none over the same period last year.

Egypt became a net exporter of LNG in 2018 after the discovery of the supergiant Zohr gas field — the Mediterranean’s largest — allowed us to pull the plug on LNG imports. While Egypt was the Middle East’s biggest LNG importer in 2016 and 2017, it made the largest contribution to the growth of Arab countries’ LNG exports in 2Q2021, according to a report by the Organization of Arab Petroleum Exporting Countries (OAPEC) issued in August.

Egypt’s LNG exports also picked up steam after we brought the Damietta liquefied natural gas (LNG) plant online earlier in the year following an eight-year hiatus. The revival of the plant was expected to boost Egyptian natgas supplies to Europe, at least 30 LNG shipments have made their way out of the revived plant and the Idku facility since then.