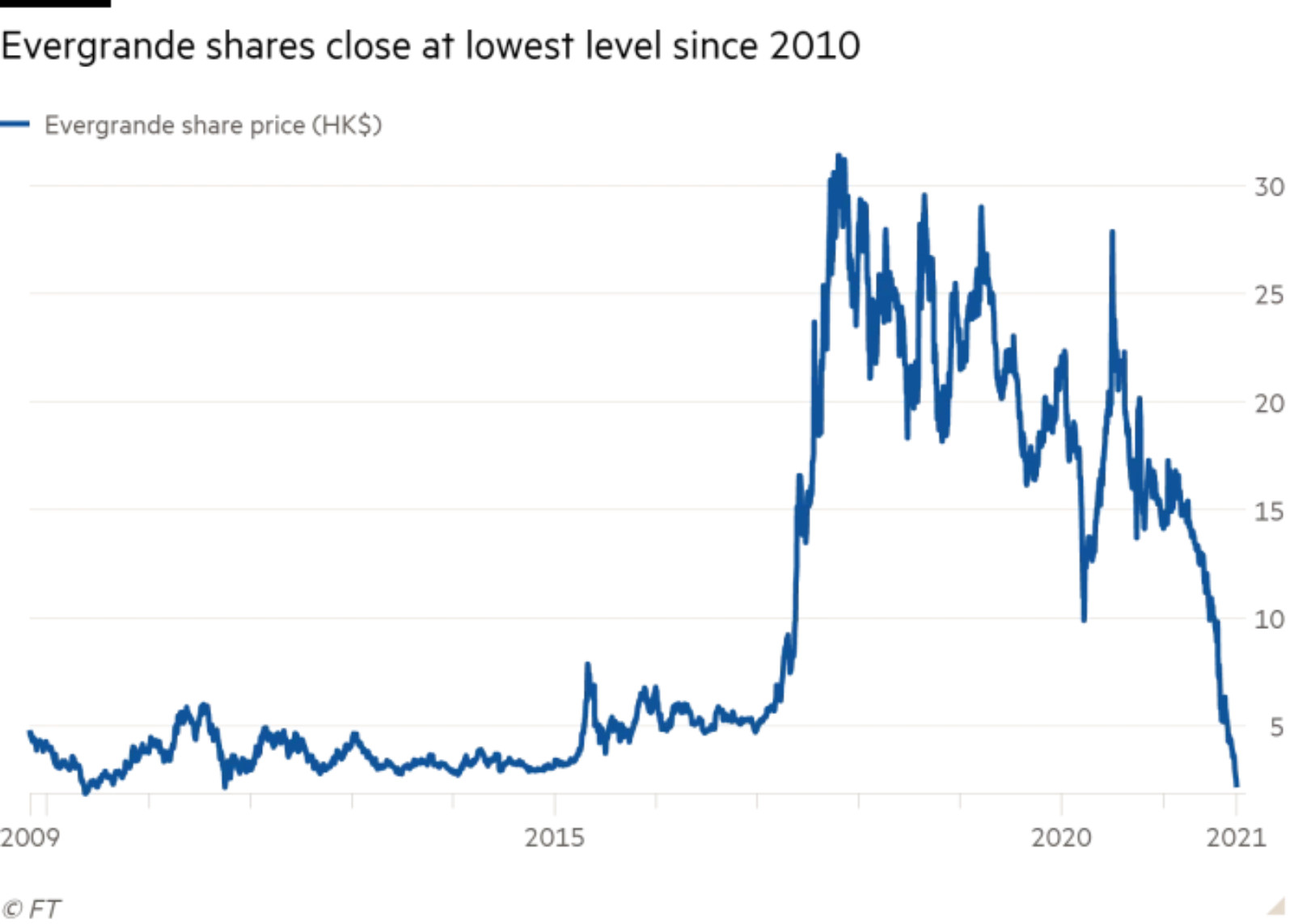 China’s brewing Evergrande crisis is being blamed for a global equity sell-off: Stocks fell in Asia, Europe and the US yesterday amid fears that Chinese property giant Evergrande could default on the more than USD 300 bn it owes to creditors and other firms.

US stocks suffered their worst day in four months, despite late-session dip-buyers helping the market to recover some of its losses. The S&P 500 fell as much as 2.9% before closing 1.7% in the red, while the tech-focused Nasdaq lost 2.1% and the Europe-wide Stoxx 600 closed down 1.7%.

At the epicenter of the crisis: Hong Kong’s Hang Seng index closed at its lowest in almost a year, while the Hang Seng Property index, which includes a dozen big developers, fell almost 7% to lows not seen since 2016. Hong Kong-traded Evergrande shares, meanwhile, closed down more than 10%, while the price of one of the company’s bonds dropped below USD 0.25 on the USD. Chinese markets were mercifully closed for a public holiday.

Contagion in China? Yesterday’s poor market performance adds weight to fears that liquidity troubles at the world’s most-indebted property developer will spread to the wider Chinese property market and beyond. “Evergrande is just the tip of the iceberg,” the managing director of one Hong Kong-based brokerage told the Financial Times, adding that Chinese developers are under pressure to repay USD-denominated bonds amid a potentially hostile regulatory environment that could see them forced to cut housing costs, which in turn would affect bank mortgage revenues. “It has a chain effect.”

And beyond: The sell-off among US social media stocks — assets that are far removed from the Chinese property market — may signal wider market contagion and the spread of risk-off sentiment. “You’ve got a whole basket of things to be concerned about — throw this headline into the mix and that throws everything askew. So there’s going to be irrational de-risking taking place that doesn’t connect logically,” one strategist told Bloomberg.

Fixed-income + commodity markets react: Low-rated, high-yield US corporate bonds slumped on the news, while the cost of insuring high-yield debt spiked. True to their safe-haven reputation, yields on 10-year US treasury bonds — which generally fall in tandem with rising demand — dropped 0.05 percentage points to 1.324%, with a similar drop seen in German Bund yields. The move away from riskier assets was evident globally, with oil and BTC dropping. Commodities with big exposure to the Chinese economy, like metal, also saw big declines, in turn negatively affecting mining shares. Energy and financial companies were also losers at close on Monday.

Here at home, the EGX30 is back in the red year-to-date after falling 1.6% yesterday. Real estate firms led the sell-off, with the Egyptian Resorts Company falling 6.2%, Heliopolis Housing losing 5.6% and Madinet Nasr Housing & Development shedding 4.4%. The benchmark index is now down 1.2% YTD.

The day ahead: Asian markets were stable ahead of dispatch with Chinese stocks in the green as of 5am CLT. Stock futures have US markets rebounding in early trading today, while the picture is more mixed in Europe.

All of this could be setting us up for a high-stakes Fed meeting today: The US Federal Reserve will hold its two-day policy meeting today and tomorrow, during which it is expected to announce more details on when it will begin to unwind its covid-era bond-buying programme.

The key question: With the markets appearing rattled, will policymakers play it safe and hold off announcing a taper timetable? Under pressure from rising inflation, the majority of economists are expecting the bank to begin reducing stimulus before the end of the year, but Fed officials are likely going to tread carefully to avoid further inflaming the escalating Evergrande sell-off. Chairman Jay Powell will announce the central bank’s decision on the taper and interest rates at a presser after the meeting ends tomorrow.