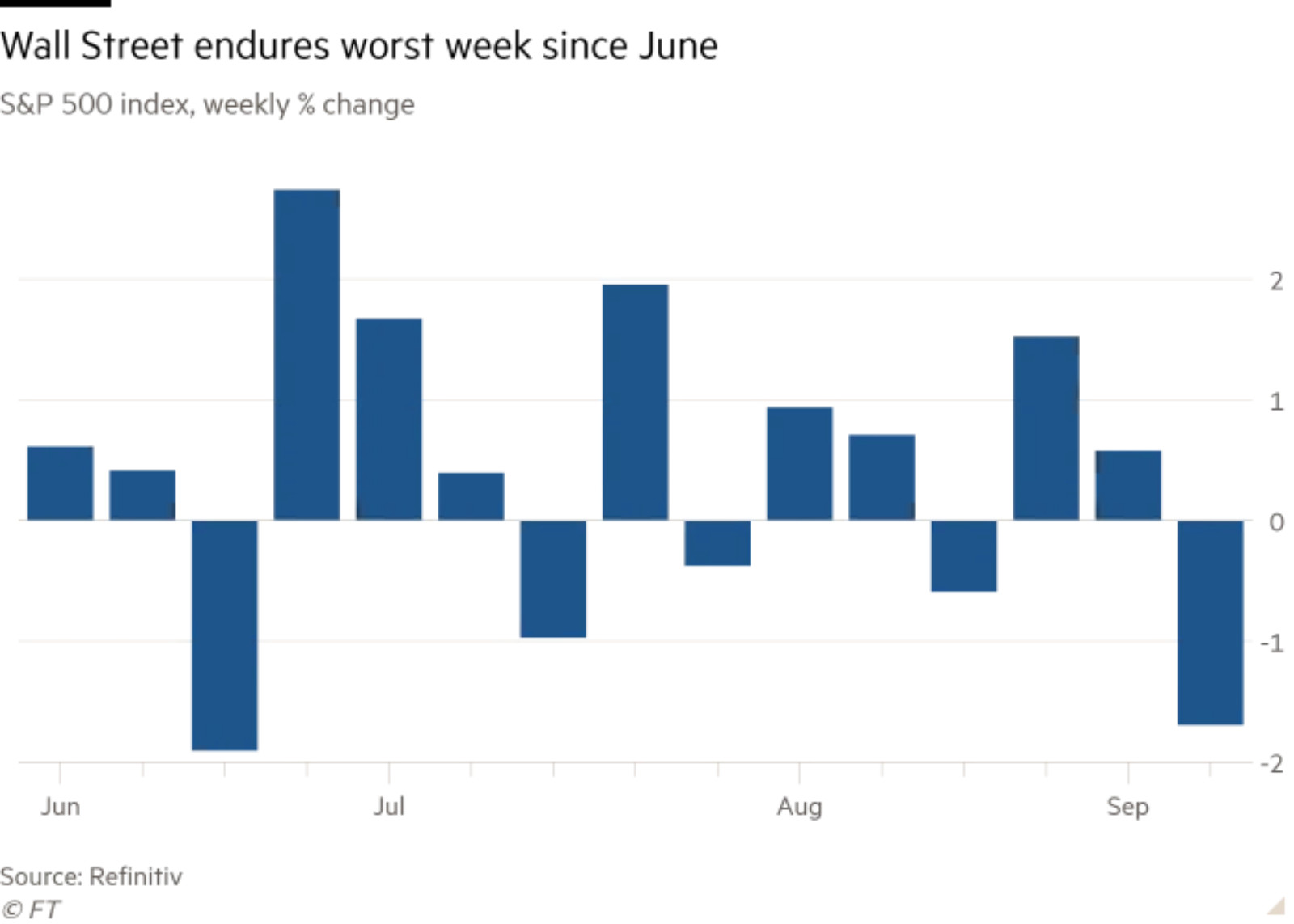 Have US equities peaked? Some analysts are beginning to think so, after US stocks last week saw their worst performance since June, according to the Financial Times. The S&P 500 closed down 1.7% over the week on Friday and the tech-heavy Nasdaq lost 1.6%, as investors started to take heed of rising inflation and high costs caused by global supply chain disruptions as the delta variant stymies production.

Inflation worries: “The market is starting to think maybe 2022 will be a year when inflation remains high,” a Société Générale strategist told the salmon-colored paper on Friday after all three major US indexes sank in response to fresh inflation data. Both the S&P 500 and the Dow Jones lost 0.8% and the Nasdaq 0.9% during trading after the Labor Department published figures showing the US producer price index grew 8.3% y-o-y in August, its fastest pace since it began calculating yearly wholesale price inflation in 2010. “I haven’t seen anything that convinces me of when this disruption will be resolved,” the analyst said, referring to persistent shortages in everything from semiconductors to food.

Time for a correction, say Wall Street Banks: Almost all Wall Street banks are now forecasting trouble in the markets as historically high valuations, a potential slowdown in US economic growth, and concerns that the Federal Reserve could begin unwinding stimulus weigh on outlooks, Bloomberg reports. Deutsche Bank says there is a “growing” risk of a market correction, Canaccord Genuity is predicting a “period of turmoil” for global stocks, while the CEO of financial services firm Ladenburg Thalmann is particularly concerned about what happens between now and the end of October, telling Bloomberg that “it’s the next six weeks in the market that I have the greatest fear of.”

Inflationary pressures could force US rate hikes to come sooner than we think: The Fed will raise interest rates by at least a quarter of a percentage point in 2022, according to 70% of economists surveyed by the FT, with 20% predicting the rate hike to come in the first half of next year. That would be around a year earlier than the Fed has publicly stated, with chair Jay Powell saying earlier this year that the bank would wait until 2023 before making the move.

Economists also expect the central bank to wind down its pandemic-era bond-buying program later this year, with most of the 49 economists polled predicting the taper to begin in November or December 2021 and be completed by next year.

But darkening clouds in the US could put all of this on hold: The rapid US economic recovery is starting to come undone as the spread of the delta variant forces businesses to rethink their plans, the Financial Times reports. A new study shows that around a quarter of small US businesses have seen revenues fall over the past three weeks, the nation’s biggest airlines have seen a dip in demand, while an increasing number of executives are warning that the spread of delta is increasing uncertainty about their forecasts.

This comes a week after an unexpectedly poor August jobs report raised doubts over the strength of the US labor market and the sustainability of the economic recovery. The Fed has said that it wants to approach maximum employment before it begins to withdraw stimulus.