Investor confidence in Egypt’s renewables is rising, but risks remain 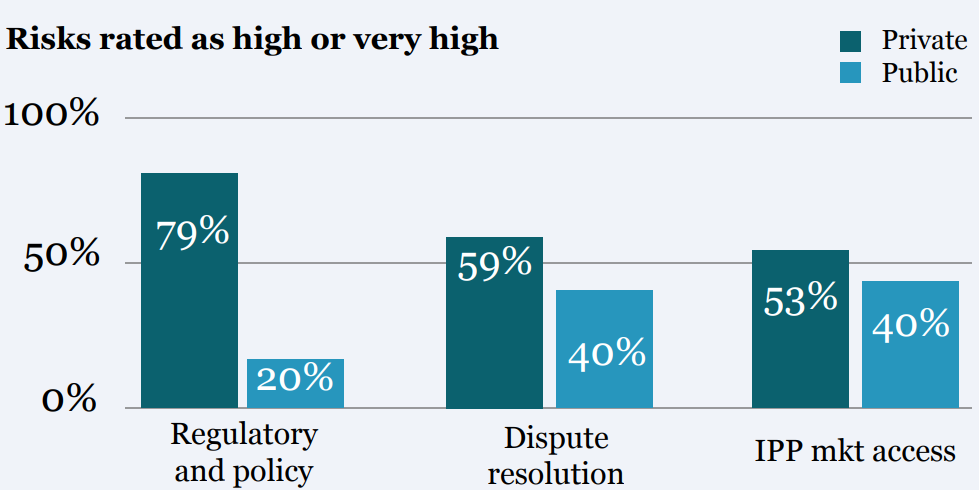 Investor confidence is rising in Egypt’s renewables, but major risks are still seen in some areas: Since the launch (pdf) of Phase Two of Egypt’s solar feed-in-tariff (FiT) program and the completion of the 1.5 GW Benban solar park, Egypt’s been a hotbed of renewable energy investment. Wind energy investment is also well underway, with players keen to get in on projects like the Ras Gharib wind farm.

An April 2021 report (pdf) by RES4Africa and PricewaterhouseCoopers assesses the perceived risk of investing in renewable energy, in seven countries in the Southern and Eastern Mediterranean (SEMED). It follows an earlier 2016 report (pdf). The 2021 report’s Egypt-focused section uses data from five public sector and 21 private sector survey participants.

The good news: overall, Egypt’s renewables investment environment is seen as less risky than it was in 2016. Investor confidence in Egypt’s renewable energy sector has improved markedly in the last five years, with Egypt now considered medium-risk rather than high-risk.

How does Egypt compare to its regional peers? Regionally, overall perceived investment risk in renewables has decreased since 2016. Morocco’s risk level is lowest. Egypt, Jordan and Tunisia are all considered medium-risk markets, and Algeria, Libya and Lebanon high-risk. Like Egypt, Morocco, Jordan and Tunisia all see pronounced gaps in risk perception between the public and private sectors, the report notes.

Thanks to gov’t efforts to improve the legislative framework, Phase 2 of the FiT attracted much more interest than Phase1, the report tells us. Phase Two’s contractual arrangements included a 25-year Power Purchase Agreement (PPA) with the Egyptian Electricity Transmission Co. (EETC) and a sovereign guarantee backing the payment obligations of energy-purchasing parties.

Now, investors feel the likelihood of not seeing project revenues is low: Over 60% of private sector respondents see risks related to project counterparties (usually EETC), capital transfer or termination as being of low concern. Phase Two’s PPA and the sovereign guarantee upped investor confidence substantially over five years, the report tells us.

Meanwhile, construction, operational, social and environmental risks aren’t a worry: Construction and operation concerns remain low, perhaps driven by the affordability of local raw materials and components, competitive terms offered by Egypt’s engineering companies, and our highly qualified workforce, the report says. 80% of private sector respondents see obtaining licenses and permits as of low concern — a substantial improvement from five years ago. And perceived environmental and social risks are low, perhaps because of the job-creation potential renewable projects offer, the report notes.

Still, major investment concerns remain — particularly among the private sector. Despite gov’t reforms, the regulatory framework tops them all. The law is considered the most problematic risk area among investors, with perceived risk actually increasing in the last five years, “in contrast to the improvement in all other areas.” But while 79% of private sector respondents consider regulatory and policy issues to be of very high concern, only 20% of public stakeholders agree. More business-government dialogue is needed to bridge this perception gap, the report says.

Along with the belief that non-megaprojects face greater risks than megaprojects: The private sector sees Egypt’s legal framework as inadequate to support investment in renewables projects, aside from government-backed megaprojects, the report says. Projects that aren’t megaprojects face more uncertainties when it comes to permitting, wheeling charges and curtailment, investors believe.

And lingering concerns about dispute resolution: Dispute resolution was particularly challenging during Phase One of the FiT, when international arbitration was banned, the report says. Though this was resolved during Phase Two, investor concerns remain about the quality of Egypt’s judicial processes. Egypt ranked 166 globally for contract enforcement in the 2020 World Bank Doing Business Report (pdf) — well below the MENA average, the 2021 report notes.

Some 60% of private sector respondents also have concerns about Egypt’s tax regime, the report tells us. Although a 30% tax deduction on net income for renewables projects was among the incentives introduced by the new Investment Act of 2017, investors are said to be concerned that new taxes may be introduced in the wake of the pandemic to make up any budgetary shortfalls.

The public and private sectors are much more aligned on FX risks, which are heightened by pandemic-driven instability, the report says. Although the FX rate has stabilized since the 2016 devaluation, covid-19 and decreased tourism revenues have driven the value of the EGP down. The central bank issued a convertibility guarantee, which offers investors some relief, but more FX stability is needed to lend it credibility, the report adds.

The report has a series of recommendations for how to reduce perceived risk: These include working to reduce the influence of the EETC, and increasing business-government dialogue. Dispute resolution timeframes should be shortened, and the quality of Egypt’s judicial processes improved. The EGP should be stabilized to maintain the government convertibility guarantee — a crucial part of boosting investor confidence, it says. Small and medium-sized projects should see increased access to private capital. Renewables projects should continue to receive tax breaks, and fossil fuel subsidy reductions should continue.