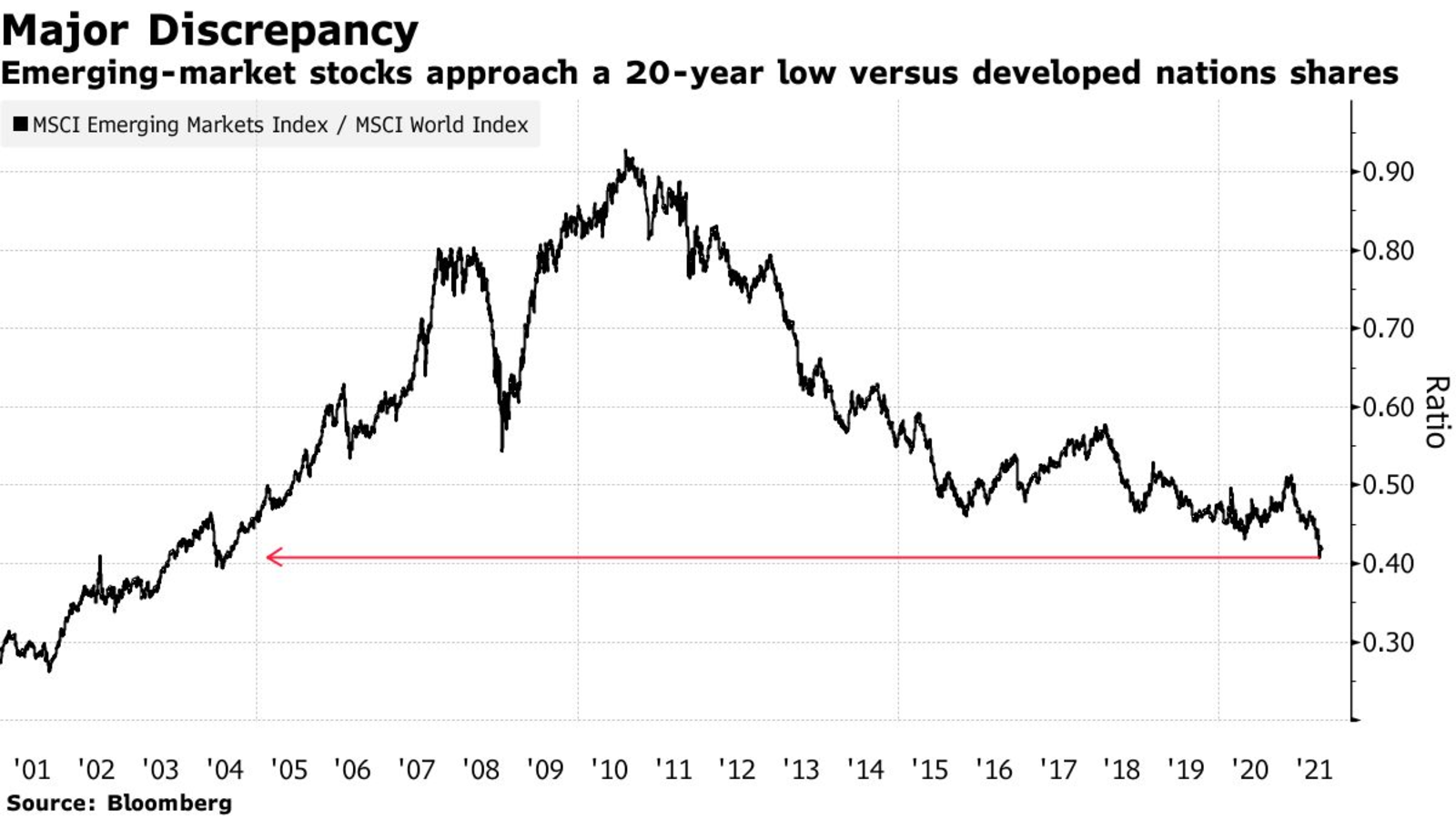 A “lost decade” for emerging-market stocks could be coming to an end, as the commodities boom and earnings optimism perk investors’ interest in companies in the developing world, Bloomberg reports. Goldman Sachs, Bank of America and Lazard Asset Management all expect inflows into undervalued EM equities to pick up as the vaccine rollout gains pace and the global recovery continues, despite headwinds in Asia caused by China’s escalating crackdown on business.

EM indexes have consistently underperformed since the financial crisis. MSCI’s EM stock index has increased just 8% in the 10 years since the global financial crisis — and is currently only slightly above its post-crisis market peak in 2011. In the same time, equities in developed markets have more than doubled in value. So far in 2021, the EM index is down 5%, while the benchmark for companies in developed economies has risen by 14%.

Goldman Sachs is “quite upbeat” on EM stocks, one analyst told Bloomberg, naming Brazilian, Russian and Mexican currencies as top picks. Meanwhile, a Bank of America strategist said he expected the acceleration of capital inflows into markets in Eastern Europe, the Middle East and Africa since March to continue “given supportive macro drivers and equity valuations.” Some analysts are predicting that emerging-market equities could gain 15% in the next 12 months.

EMs might need some time to deliver on their potential: Once vaccination rates pick up, one State Street analyst said he expects EM equities to outstrip EM debt and even catch up to developed-market equities. “Don’t discount the EM consumer when the pandemic’s grip on consumer activity fades,” he told Bloomberg, adding that technology would play a key role in boosting developing nations’ growth.

But others are more pessimistic: BlackRock has warned of a “risk of permanent scarring” to EM growth as a result of slow vaccination rates, a withdrawal of policy support and heightened uncertainty about the trajectory of the USD. Many central banks in emerging economies have begun raising interest rates in response to rising inflation, which BlackRock said brings a “greater risk of scarring.”