Banks may face more pressure in the coming fiscal year 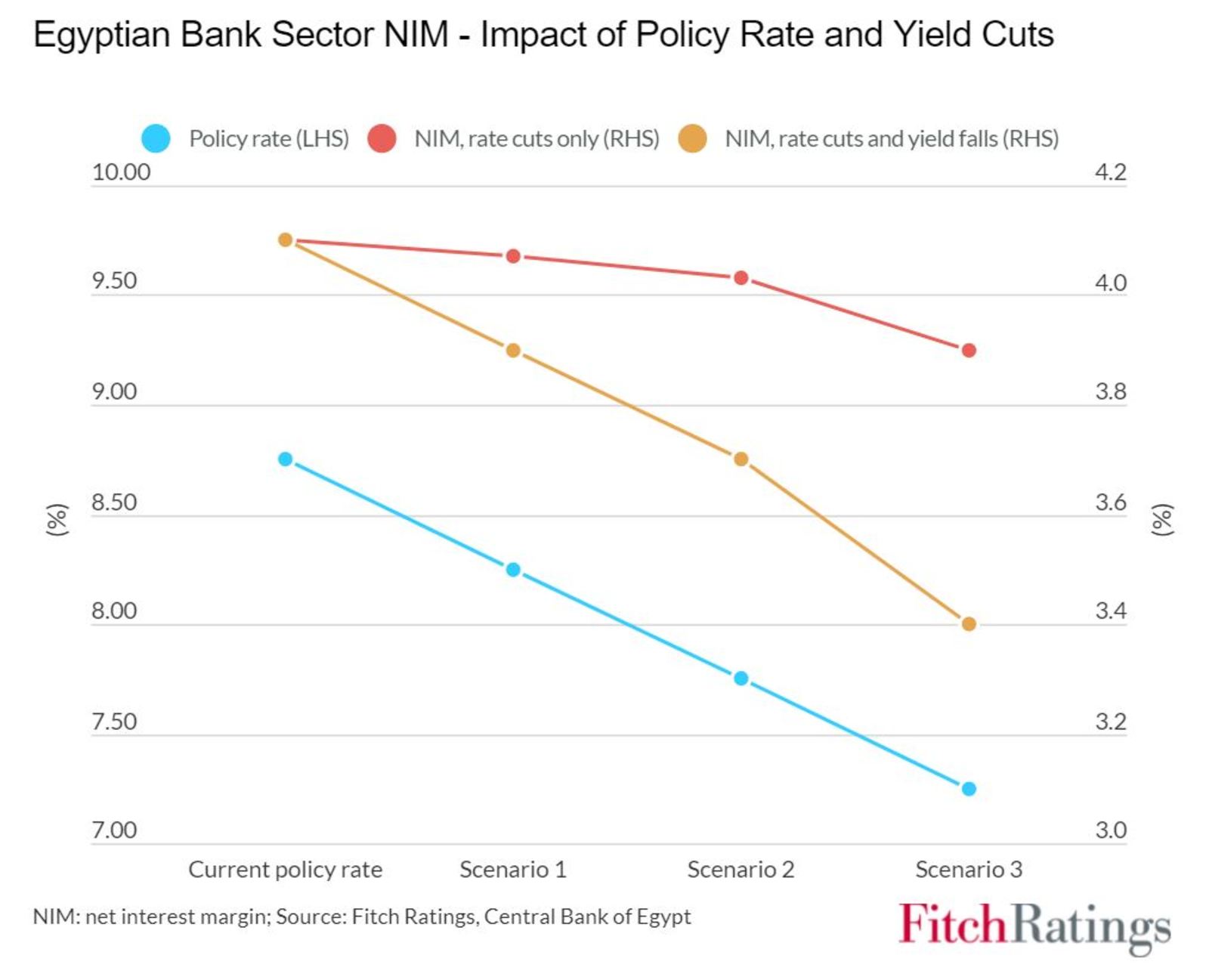 Egyptian banks could see their interest income squeezed during the coming state fiscal year due to lower interest rates and a potential dip in treasury yields, Fitch Ratings said in a report yesterday.

The sector’s average net interest-margin (NIM) held up remarkably well through 2020, coming in at 4.1% despite the central bank cutting rates by 400 bps last year in response to the pandemic, the ratings agency said. This was largely thanks to yields on sovereign bonds — from which banks derive around 65% of their income — remaining high throughout the year.

This won’t necessarily remain the status quo in the 12 months ending June 2022, though, under a few scenarios mapped out by the ratings agency yesterday.

Scenario #1: The central bank cuts rates by 50-150 bps in FY2021-2022 + yields remain unchanged. Banks are unlikely to feel much of an impact under this scenario, given their main source of interest income would remain unaffected. This doesn’t mean that every bank would feel the same impact though. Fitch says that the individual bank’s funding structure, and asset and liability pricing powers will determine how exposed it is to a lower interest rate environment.

Scenario #2: The central bank cuts rates by 50-150 bps in FY2021-2022 + yields fall with them. Under this scenario, the effects on NIMs will be “more significant,” the ratings agency says, estimating that a rate reduction of up to 150 bps will squeeze margins by as much as 70 bps.

The odds of aggressive rate cuts aren't exactly high: Most of the analysts we surveyed last week ahead of this Thursday’s MPC meeting expect the central bank to leave rates unchanged for most of the year, with a cut coming in the final quarter at the very earliest. The central bank has maintained rates for four consecutive meetings, largely to avoid putting pressure on real rates and dimming the attractiveness of the EGP carry trade — the most attractive of its kind in the world.

The direction of yields isn’t the only thing that could impact interest income: Lending to folks other than government matters, too. Corporate and consumer borrowing are set to grow over the next 18 months, according to Fitch, which predicts high single-digit loan growth through 2021 and low double-digit growth next year, helped by the CBE’s subsidized loan scheme and an increase in capex spending.

Scenario #3: Interest rates + yields remain the same, but bond holdings fall 5-15% due to increased lending. Should banks sell down some of their positions in high-yielding treasuries in favor of increasing lower-yielding personal and business loans, Fitch estimates that the average NIM could fall by up 90 bps.

Scenario #4: Interest rates + yields drop and bond holdings fall 5-15%. Combine a smaller treasury portfolio and lower yields, and the NIMs in the sector fall by up to 170 bps, the ratings agency says.

Banks remained financially sound throughout the pandemic, despite operating income from loans and core operations mostly decreasing. This is because a large part of bank income comes from government debt. Egyptian banks are also very conservative, with relatively low loan-to-deposit ratios by international standards.

Background: Fitch flagged in April that the profitability of banks may drop this year because of lower interest rates and a rise in default rates that may result from the central bank lifting its emergency support measures.