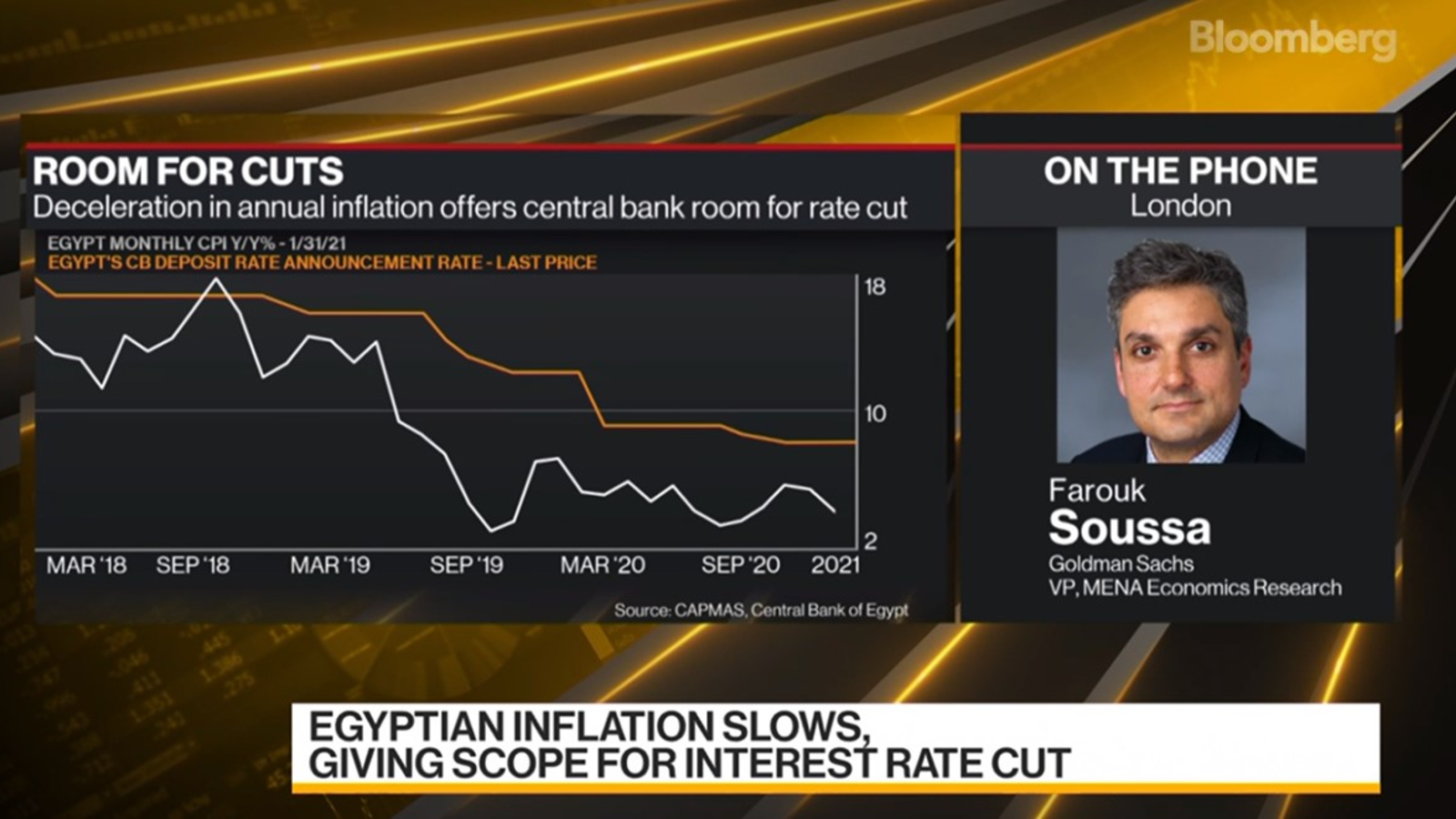 The Central Bank of Egypt (CBE) can afford to cut rates by as much as 50 bps at its meeting later this month, Goldman Sachs MENA economist Farouk Soussa told Bloomberg (watch, runtime 7:12). “We see a very strong case for rate cuts in the near term, as in June. That is predicated on the fact that Egypt has the highest real rates within EM,” Soussa said. The main operation and discount rates currently stand at 8.75%, while overnight deposit and lending rates are at 8.25% and 9.25% respectively. The CBE left rates on hold for a fourth consecutive meeting in April to maintain attractive real rates and in anticipation of rising inflation.

Low inflation gives policymakers cover to lower rates: Inflation slowed against expectations in April, thanks to a favorable base effect that offset a rise in monthly prices. Annual urban inflation fell to 4.1% in April from 4.5% in March, while the national rate (pdf) fell 40 bps to 4.4%. The CBE could look to cut rates to stimulate spending, though an anticipated spike in inflation later in the year as a rise in global commodity prices trickles down to local products makes a hold more likely, analysts previously told us.

And a rate cut won’t harm Egypt’s all important carry trade, Soussa said, suggesting that the CBE could potentially afford to be a bit more aggressive approach. “Real yields in Egypt are currently around 8-9% on a forward-looking basis. … There is plenty of scope there for those rates to come down without affecting the relative attractiveness of rates in Egypt,” he said.

Foreign investors in Egyptian debt have provided an important source of inflows as tourism receipts and FDI contracted in lock step with the rest of the world after the start of the pandemic. Foreign holdings of Egyptian bills and bonds fully recovered from to hit a record USD 28.5 bn in February, while inflows into short-term treasuries reached almost USD 21 bn at the end of April.

Egypt should escape any tapering by the Fed relatively unscathed, Soussa suggested, telling Bloomberg that, despite the risks posed by monetary tightening in the US, Goldman “remains bullish” on local and hard-currency Egyptian bonds.

What is the carry trade and why is it so important? We’ve got this handy explainer to answer that for you.

SPEAKING OF FOREIGN INFLOWS- Egypt's foreign currency reserves increased by almost USD 125 mn in May to USD 40.468 bn, according to recent figures by the Central Bank of Egypt (CBE). FX reserves are now at their highest level since April 2020, having plummeted almost USD 10 bn during the peak of the covid-19-induced global pullback from emerging markets last year.