TONIGHT: Vaccine deliveries are now a thing; Blinken is in the Middle East; Amazon is buying MGM; Cabinet has withdrawn a number of legislation for review; Eat Gaya tonight;

It’s been a very Ramadan-esque news day today, with diplomacy still guiding the conversation in the local and foreign press.

We’re back this afternoon with Part 2 of our exclusive interview with EFG Hermes CEO Karim Awad, where he dives deeper into EFG Hermes’ forays into merchant banking and direct investment, as well as the expansion abroad of its NBFS arm. Karim also discusses what’s next for the debt market, and what obstacles foreign institutional investors see in Egypt.

Missed Part 1? You can catch Awad speaking on the nuances of EFG Hermes’ acquisition of the Arab Investment Bank in cooperation with the Sovereign Fund of Egypt and what that means for privatization here.

AND SPEAKING OF THE PRIVATE SECTOR-LED GROWTH- The European Commission is urging that it take a leading role in Egypt’s post-covid recovery. In a report that was out earlier this month, the commission looks at how the pandemic has affected our economic reform agenda and what it would take to bounce back. We dive deep into the report in the Speed Round below.

The IMF is still not out with a staff report on Egypt’s economic performance and policies as of dispatch time. The report is due to be released today, according to IMF Executive Director Mahmoud Mohieldin.

PSA- The Health Ministry has launched at-home vaccinations for people unable to head to vaccine centers, including the paralyzed and people with physical challenges, Office Director to the Assistant Minister of Health Ramy Galal told Amr Adib on El Hekaya (watch, runtime: 04:28). Galal added that individuals can request a vaccine to be delivered by registering on the Health Ministry website and then calling the hotline 15335. The ministry will then determine whether they are eligible for an at-home vaccine.

LEGISLATION WATCH- The Madbouly cabinet has recalled a draft law that is part of the long-awaited automotive strategy, and had been slated for discussions in the House of Representatives, according to a letter seen by Enterprise. The reasons behind the decision are still unclear. The House is expected to discuss several different bills that set a legislative framework to uplift the auto industry through incentives, infrastructure improvements, and trade agreements with other countries. Cabinet had approved the overall strategy last year, but revealed very few of its fine details. The draft law that was recalled this morning was one of the legislative provisions required to kickstart the plan.

What we know about the strategy: We reported last year that a cornerstone of the new plan would be to provide customs discounts to manufacturers on a sliding scale linked to the percentage of locally-produced content they use, as well as introduce a new ‘value-added rule’ to calculate domestic content used when deciding whether a car qualifies as locally-made.

Several other bills have also now made it back to the drawing board, after having been with legislators. Details on these pieces of legislation are scant and little-reported on by the local press. We’ll be keeping an eye on them and will come out with updates as they come to us. They include:

IN DIPLO NEWS, US Secretary of State Antony Blinken has landed in the Middle East today, in a four-city tour dedicated to maintaining the Gaza-Israel ceasefire, reports Reuters. Blinken’s first stop is in Jerusalem, where he’ll be sitting down with Israeli Prime Minister Benjamin Netanyahu before heading to Ramallah for talks with Palestinian President Mahmoud Abbas. An anonymous senior State Department official told the newswire that it was too early for wider peace talks between Israel and Palestine, and reiterated the potential of a two-state solution.

Blinken’s next stops will bring him to Cairo and Amman in the coming days, but no timeline has yet been provided.

The Regeni case is back in the news: Italian prosecutors have asked the judge presiding over the case of the death of Giulio Regeni to put four members of Egypt’s security services on trial, Reuters reports. It remains unclear if the judge would make a ruling before day-end, though “any full trial would be unlikely to start before the summer recess,” writes the newswire.

The European Union is hosting a webinar in Egypt tomorrow to discuss the outcomes of the Inclusive Economic Growth Program which supports SMEs to bolster the economy and promote inclusive growth, according to a press release (pdf). The EU-funded program has carried out initiatives to develop sustainable tourism and heritage sites, among others. The webinar will feature Deputy Head of the EU Delegation to Egypt Tobais Krause as well as Assistant to the Minister of International Cooperation and Supervisor of the European Cooperation Sector Sherihan Bekheit. You can register for the webinar here.

Day two of the British Egyptian Business Association’s (BEBA) Healthcare Virtual Week is tomorrow. The session will offer solutions on how to digitize Egypt’s healthcare industry. The event starts at 12pm and you can register here.

BEBA will also hold a virtual conversation with Oil Minister Tarek El Molla on 7 June to discuss the sector’s achievements. You can register through this link. 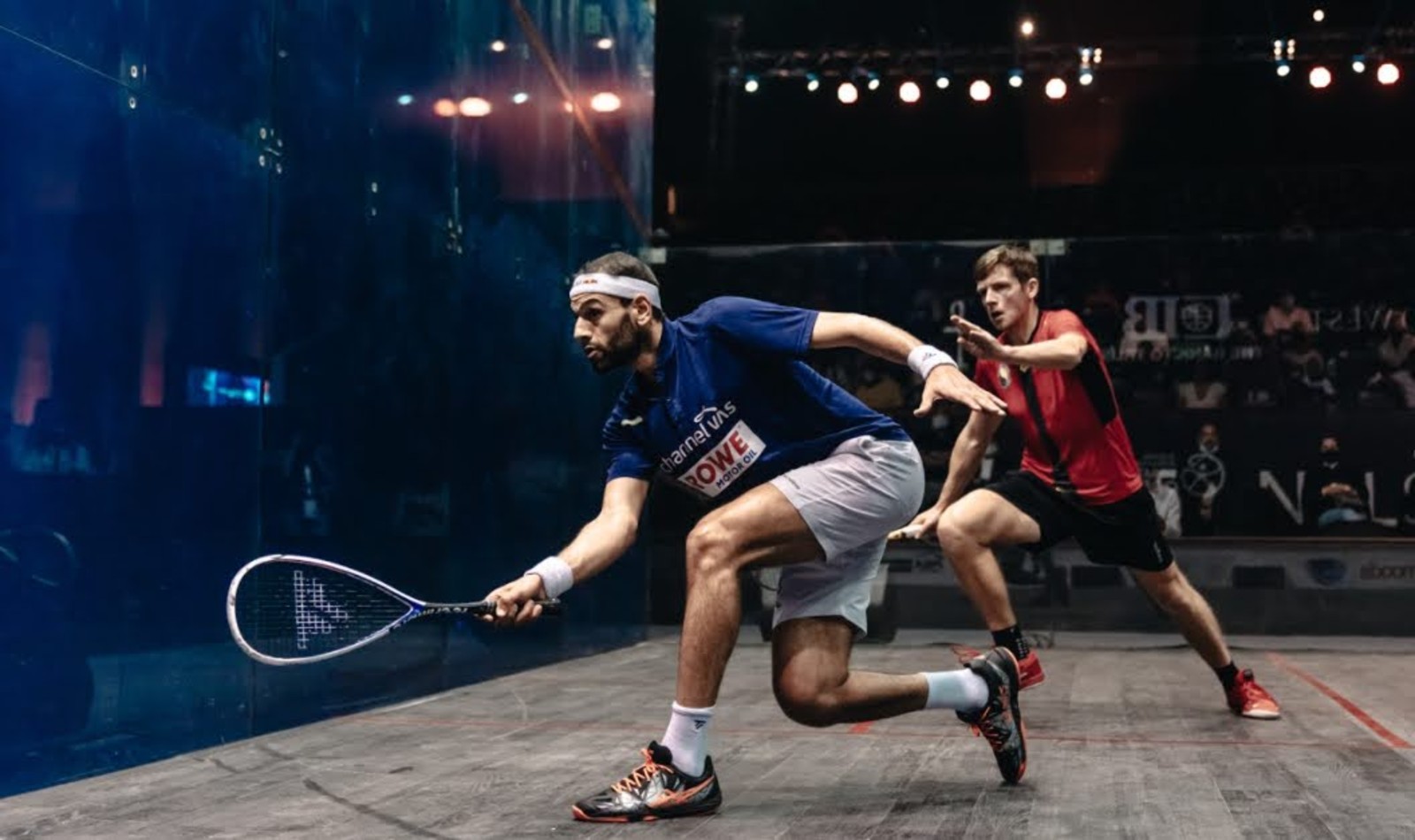 The El Gouna International Squash Open 2021 is ongoing and runs until Friday. Fans will be allowed to enter the stands, with the first few match days without charge and tickets to be sold for the semis and finals. You can also watch the matches live on PSA Squash YouTube page. The event is supported by our good friends at CIB. Five Egyptian men have made it to the third round of the top half of the tournament, while in the women’s tournament, four Egyptians are still standing in the final legs of the competition.

Meanwhile, the CIB PSA World Tour Finals will run on 22-27 June in Cairo.

Bibliotheca Alexandria is organizing a webinar to discuss safekeeping artifacts and heritage this Thursday. Headlined “Fighting treasure hunting from Africa for the Americas: Protecting the history of the drowning world,” it will feature University of Edinburgh’s Arturo Rey da Silva. You can tune in live at 2:30pm from the Alexandria Center for Hellenistic Studies’ Facebook page.

There are 14 days left to apply for the 2021 edition of Africa’s Business Heroes prize competition, according to a press release (pdf). The Jack Ma Foundation’s philanthropic program aims to shed light on and support Africa’s entrepreneurial talent. This year’s competition will see 10 finalists split a USD 1.5 mn cash prize, access mentorship programs, and more. You can apply through their website.

Amazon could soon acquire the Hollywood studio MGM Holdings for an estimated USD 9 bn as soon as next week, in Amazon’s second largest acquisition since Whole Food’s USD 13.7 bn agreement, writes The Wall Street Journal. The potential takeover will transform the film studio — which dates back to the silent-film era — into a digital streaming service provider. The studio is behind hits such as Rocky, the James Bond franchise, Pink Panther, and Singin’ in the Rain.

First Facebook, then Amazon, and now Google under an antitrust probe: Germany’s antitrust regulator announced opening two investigations into European units of Google and its parent company, Alphabet, on allegations of anti-competitive practices, according to a statement today. The probe aims to determine whether the breadth of Google’s digital products is resulting in illegal cross-market monopolization. The investigation — the biggest Google has faced in the region since the EU collected more than USD 9 bn in fines in 2019 for antitrust violations — follows the application of a new law late last year giving German authorities a sharper teeth to clamp down on tech giants, with similar proceedings launched recently against Amazon and Facebook.

Netflix Original The Woman in The Window is a claustrophobic murder thriller that promises to be different than anything you’ve seen before. The film’s main character Anna Fox is an agoraphobe (someone afraid to leave their own home) and witnesses a murder from her window. When she starts to probe the issue with her neighbors, she begins getting threats and eventually comes face to face with the aspiring serial killer. The Woman in The Window is one of those movies where plot twists jump out several times towards the end of the film and leave you reeling. The New York Times and Town and Country Magazine are out with reviews.

⚽ The Egyptian Premier League has three matches on today: Wadi Degla is playing against Al Gaish at 7pm, while Al Ittihad will go up against El Gouna and Aswan against Misr Lel Makkasa, both at 9pm.

Maadi’s Korean restaurant Gaya will get you right when you walk through the door with a good whiff of food that makes our stomach growl even if we weren’t that hungry. Gaya’s appetizers aren’t to be missed, and we insist you try the seafood pancake (you can thank us later). Their main courses come in a steaming plate of aromatic goodness, and we recommend the beef bulgogi — with a side of fried rice too and you’re good to go. It’s good to step out of your culinary comfort zone once in a while, and Gaya is a great place to ensure you love the new experience.

Become a master of negotiation with The Five Tool Negotiator by Russell Korobkin. The UCLA law professor comes up with five tools that help you identify, communicate, and achieve the best possible outcomes in a negotiation whether it’s buying a used car or a multi-mn business acquisition. Korobkin describes negotiations as “both a strategic and social activity” and he makes sure to outline all the different questions that should be revolving in your head as you try to bargain, as well as what your counterpart is also thinking. The book brings to life concepts from the fields of psychology, economics, and game theory, all while retelling interesting anecdotes and incorporating fascinating social science experiments.

🌤 TOMORROW’S WEATHER- We’re in for daytime highs of 39°C tomorrow, falling to 21°C at night, our favorite weather app tells us.