Well, nice people, we have entirely “meh” news on which to end the week: Sunday is NOT a national holiday.

Instead, we will be off on Thursday, 29 April, in observance of Sinai Liberation Day, according to a cabinet statement. The Central Bank of Egypt and the Egyptian Exchange had not issued circulars as of dispatch time this afternoon, but expect that you need to be at work on Sunday if you’re a banker or trader.

It’s still not clear whether we’ll have a bank holiday on Sunday, 2 May for Coptic Easter. The day is a statutory holiday for Christians only, but banks and the EGX have traditionally taken it as a day off.

It’s also still unclear when we’ll be off for Sham El Nessim, with Cabinet Spokesman Nader Saad telling Al Shorouk that a decision has still not been made.

It is World Earth day. And in honor of the occasion, we explore in this afternoon’s What’s Next what “warming ratings” are and what they mean for portfolio managers.

THE BIG STORY TODAY: We have plenty of news this afternoon, starting with Minapharm inking an agreement to manufacture Sputnik V in Egypt. The Russian vaccine has a higher efficacy rate than the rival Sinovac jab that Vacsera will manufacture.

** CATCH UP QUICK on the top stories from today’s edition of EnterpriseAM:

HAPPENING NOW- The European Central Bank has left interest rates on hold today, Reuters reports. The ECB kept interest rates on the main operation, marginal lending and deposit rates at 0.00%, 0.25% and -0.50% respectively. “The Governing Council expects the key ECB interest rates to remain at their present or lower levels until it has seen the inflation outlook robustly converge to a level sufficiently close to, but below, 2% within its projection horizon, and such convergence has been consistently reflected in underlying inflation dynamics,” the central bank said.

Our own central bank is expected to decide on interest rates next week. The CBE’s monetary policy committee is due to meet on 29 April, and it’s not yet clear whether the meeting will be moved or go ahead as planned now that Thursday is a national holiday. Look for our poll of analysts on Sunday.

THE BIG STORY ABROAD- Joe Biden is kicking off today a summit on climate change with 40 world leaders and has pledged to cut US emissions of greenhouse gasses by 50% by 2030. The story leads the front pages of the New York Times, the Wall Street Journal and Reuters, among others. The Financial Times also has coverage.

The Gouna International Squash Open 2021, a PSA event, will run 20-28 May with 96 men and women competing. The event has the backing of our friends at CIB. 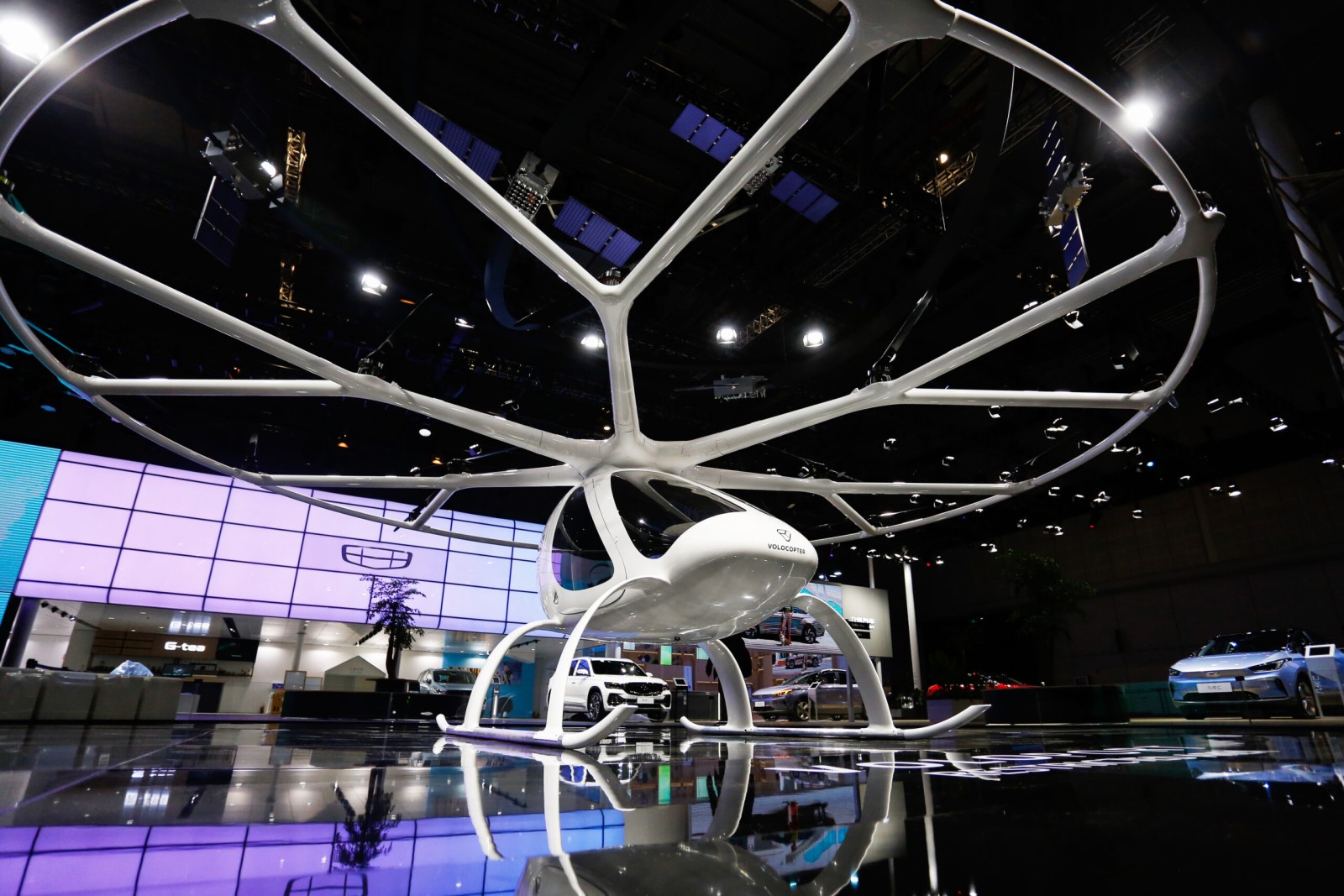 Flying cars touch down in China: Flying vehicles took center stage at the Shanghai International Automobile Industry Exhibition this year despite unclear consumer demand levels and regulation preventing widespread use, CNBC reports. Alibaba backed startup Xpeng unveiled a second prototype the company claims has been in development for eight years, while Geely debuted an “air taxi” developed by its JV Volocopter. Other companies including Hyundai, Germany’s Lilium, and China-based Ehang are also developing flying vehicles that can carry people. Warren Buffett-backed BYD was absent from the flying vehicle conversation, choosing instead to be “more focused on road transportation,” the company spokesperson said in a statement translated by CNBC.

For science nerds: Cinema might have overestimated the T-Rex, with Dutch researchers saying it was likely that the dinosaur walked at a pace similar to humans, making it easy for a person to keep up or outrun a T-Rex if the need ever presented itself, writes Reuters.

The Netflix original film Stowaway is out on the streaming platform today, starring Anna Kendrick, Toni Collette, and Daniel Dae Kim. When three astronauts go into space for a two year mission to reach Mars, they discover a stowaway (played by Shamier Anderson), an engineer who was injured and knocked out during launch prep and is now along for the ride. This is where the big dilemma pops up as a destroyed air filtration device means there’s only enough oxygen for three people to survive in what The Guardian describes as “just the realities of an agonising scenario, unfolding at a steady pace.” Meanwhile, The Los Angeles Times compares the film to philosophy’s Trolley Problem — which poses the question of is it moral to intervene in a situation so that one person dies instead of many. Is the result of death immoral, no matter the circumstances.

⚽ The Premier League’s gameweek 32 is coming to an end today, with a match between Leicester and West Brom at 9pm. Gameweek 33 is not far behind, kicking off tomorrow with Arsenal and Everton at 9pm before three matches are aired on Saturday: Liverpool and Newcastle at 1:30pm, West Ham vs Chelsea at 6:30pm, and Sheffield United and Brighton at 9pm.

Barcelona is playing against Getafe tonight at 10pm in La Liga, and on Saturday make sure to catch the Real Madrid match against Real Betis at 9pm.

In Serie A, Roma is playing against Atalanta at 6:30pm and Napoli against Lazio at 8:45pm. The league will pick up on Saturday with three matches: Genoa versus Spezia at 3pm, Parma versus Crotone at 6pm, and Sassuolo versus Sampdoria at 8:45pm.

In our local Premier League, Zamalek is playing El Entag El Harby and Al Mokawloon face off against Wadi Degla, both at 9:30pm tonight. Meanwhile, Saturday will see Ahly go up against Enppi at 9:30pm.

Simonds have outdone themselves this Ramadan… The bakery and cafe went more of a traditional route with only a few mashup creations, focusing instead on perfecting the taste and quality of the Iftar table classics. We loved their kunafa bel gebna, atayef bel eshta, om ali, basbousa, and something we don’t find often but go nuts for: baklawa bel mahlabia. You can get a full plate of just one of their specialities, but we recommend the more fun option of getting a mixed box to try a little bit of everything. You can find Simonds in New Cairo, Zamalek, Dokki, Mohandessin, Downtown Cairo, and Sheikh Zayed.

TAM Gallery is kicking off the 7th edition of Artists of Tomorrow exhibition on Saturday which will feature the largest selection of up-and-coming artists in the Egyptian art scene.

Zar-inspired Mazaher Ensemble is performing at Darb 1718 on Saturday at 9pm. The musicians of the ensemble are among the last remaining Zar practitioners in Egypt and the music will be inspired by three different styles of the genre: the Egyptian Zar, Abul Gheit Zar and African Zar.

The Mango Tree campsite is offering healthy Iftars every day out in nature. The site is in the Ahmed Orabi compound and features a number of outdoor activities.

The late Anthony Bourdain’s last book has hit the shelves, thanks to his assistant. World Travel: An Irreverent Guide was put together by coworker and friend Laurie Woolever based on an hour of audio she recorded of their brainstorming session. World Travel is a vast catalogue of Bourdain’s work, set up like a travel guide that spans 43 countries and outlines everything that allowed Bourdain to be connected to the place including the food, experiences, culture, and history. Woolever collected essays from his friends, colleagues, and his brother Christopher Bourdain to further illuminate Bourdain’s life and how he was enchanted with the world. Read these interviews with Woolever on Forbes and Eater to know more about the process of creating the book and the idea behind it.

🌤 TOMORROW’S WEATHER- Sunday sticks out like a sore thumb after this weekend. The nice weather continues on Friday (31°C) and Saturday (34°C) and you may want a light sweater if you’re out overnight. Sunday will see the mercury spike to 39°C before cooling down to 29°C on Monday.