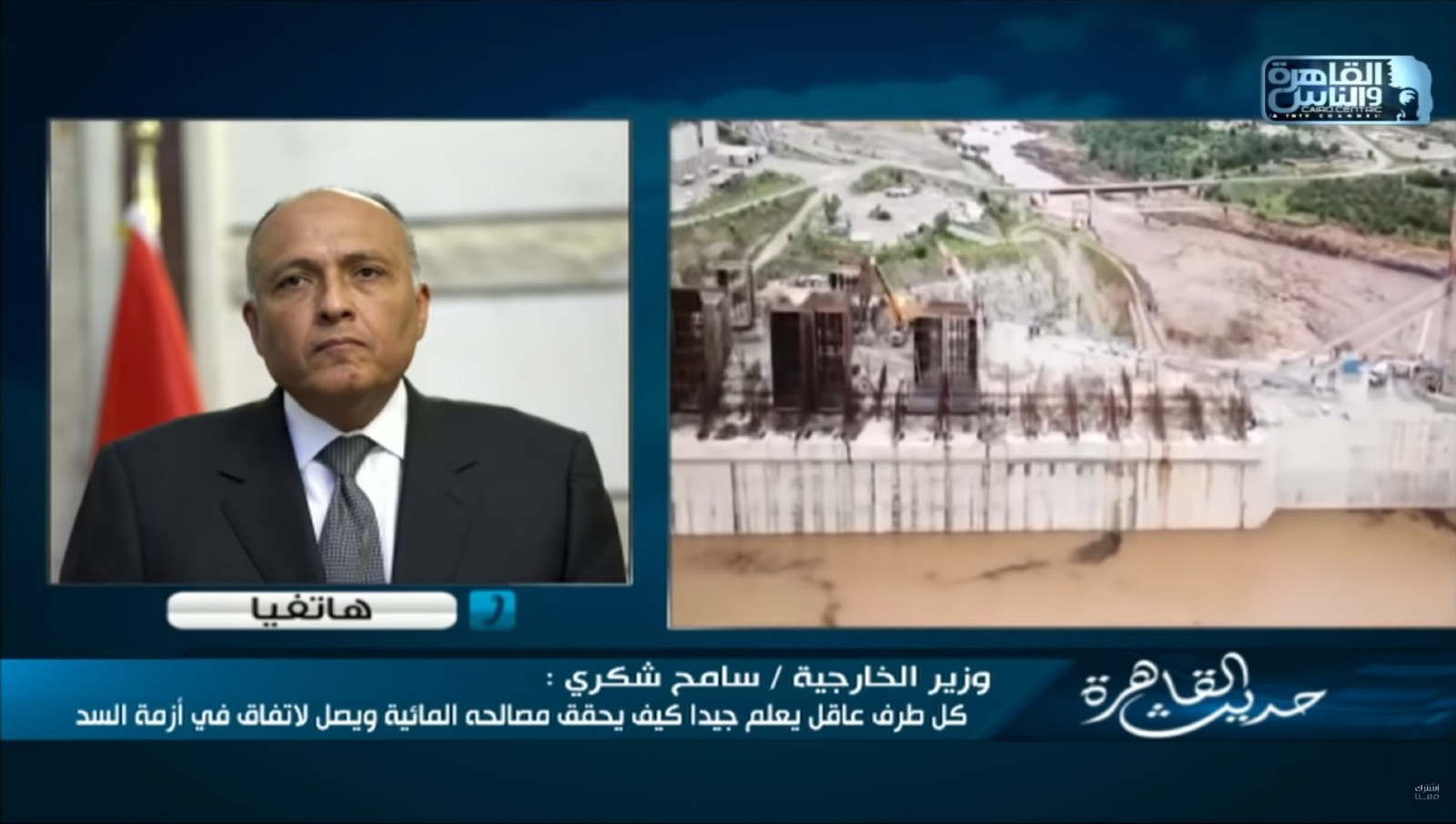 The dispute over the Grand Ethiopian Renaissance Dam continued to hog the limelight on the talk shows last night. The highlight of the night was provided by Hadeeth Al Kahira, which talked to Foreign Minister Sameh Shoukry about the current state of the negotiations and the potential for rapprochement with Turkey (watch, runtime: 10:38).

The red line remains: The minister reiterated previous statements made by the president that unilaterally reducing Egypt’s share of the Nile’s water is a red line for the government that would not be tolerated. Egypt regards filling the dam’s reservoir without an agreement as a “hostile act,” but the government is taking all diplomatic and political measures to try and resolve the issue, he said.

As does the possibility for an agreement: Egypt hopes Ethiopia reverses course and decides not to go ahead with the second phase of filling the dam’s reservoir this summer. A joint agreement between all three countries remains possible, should Ethiopia have the political will to negotiate, Shoukry said.

OTHER GERD UPDATES- Rising tensions over the dam amid Egypt and Sudan’s refusal of Ethiopia’s latest offer got coverage in Masaa DMC (watch, runtime 2:04), which also talked to Hani Sewilam, professor of water resources management at the RWTH Aachen University in Germany, about the latest developments (watch, runtime 9:03). The GERD’s impact on Egypt won’t be instant as the Aswan High Dam compensates for the shortage of water that will be stored by the GERD but this buffer will not last long, he said. The only solution is that Ethiopia bows to the international community and that’s why Egypt is asking for foreign mediators and facilitators, he added. Ala Mas’ouleety’ also featured an interview with Abbas Sharaky, professor of Water Resources at Cairo University, on the GERD (watch, runtime 5:51).

MEANWHILE: Turkey needs to walk the walk: Egypt appreciates Turkey’s recent gestures suggesting it is interested in resetting relations, but actions speak louder than words, Foreign Ministry Shoukry suggested last night (watch, runtime 4:36). The minister was speaking after two Egyptian Ikhwani mouthpieces at the Istanbul-based Al Sharq are now on indefinite leave after their shows were cancelled in the wake of Turkey's policy switch to tone down anti-Egypt rhetoric among the country’s media, Arab News reports.

The shutdown was a “positive development,” Shoukry said, urging Ankara to continue to crack down on “hostile elements” that attack Egypt — and tp avoid interfering in Egypt’s affairs. The minister also stressed that Egypt supports Lebanon to form a government that has the political will to embark on economic reforms and solve the ongoing financial crisis (watch, runtime 3:37).

ALSO LAST NIGHT- The public prosecution’s statement on the investigation into the Sohag train collision received widespread coverage: Kelma Akhira’s Lamees Al Hadidi (watch, runtime: 14:10 I 3:53), Al Hayah Al Youm (watch, runtime 3:03), and Ala Mas’ouleety (watch, runtime 12:15). We have more on this in this morning’s Also On Our Radar, below.