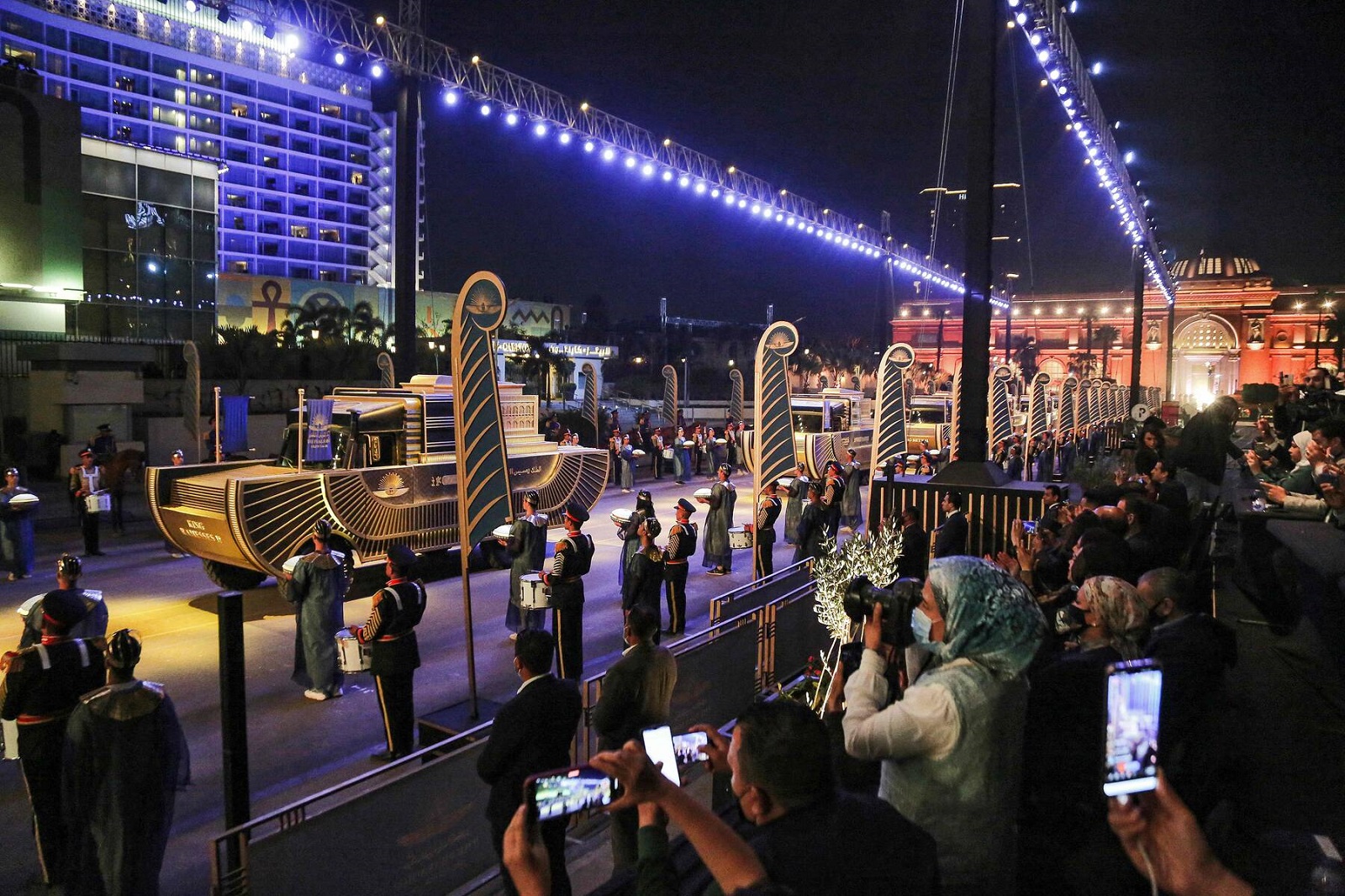 Twenty-two ancient royal mummies were moved from the Egyptian museum to the new National Museum of Egyptian Civilization last night in an extravagant ceremony dubbed the “Golden Parade.” Roads were closed in the center of the city to allow the procession of golden, pharaonic vehicles to make their way south to Fustat, where they were greeted by a 21-gun salute before the inauguration of the museum. The pharaohs were transported in specially-designed nitrogen-filled capsules to protect them, former antiquities minister and self-styled Indiana Jones Zahi Hawass said.

Who are the mummies? Eighteen kings and four queens, mostly from the ancient New Kingdom which ruled Egypt between 1539 B.C. to 1075 B.C., were transported to the Civilization Museum. They include Ramses II, Ramses IX, Thutmose III, Mert Amon, the only female pharaoh ruler Queen Hatshepsut, and the last king of the 17th Dynasty Seqenenre Tao, in addition to Seti I and Ahmose-Nefertari, the cabinet noted in a statement.

Why the move? “We chose the Civilization Museum because we want, for the first time, to display the mummies in a civilized manner, an educated manner, and not for amusement as they were in the Egyptian Museum,” Hawass said.

President Abdel Fattah El Sisi personally welcomed the mummies to their permanent home at a ceremony to inaugurate the new museum, according to an Ittihadiya statement. “This majestic scene is a new evidence of the greatness of this people, the guarding of this unique civilization that extends into the depths of history,” the president tweeted. Tourism and Antiquities Minister Khaled El Anany described the parade as a “unique global event that will not be repeated,” and said it will promote Egyptian tourism and raise cultural awareness (watch, runtime 8:41).

Twenty of the mummies will go on display to the public from 18 April at the museum, with the remaining two to be stored, the Associated Press quoted the Tourism Ministry as saying. The Fustat museum was opened with limited exhibits from 2017 and will open fully today.

The parade dominated the airwaves last night: All of the nation’s talking heads had their eyes trained on the royal cavalcade. Lamees El Hadidi’s Kelma Akhira was entirely dedicated to the coverage of the parade (watch, runtime: 1:46:55), as was Al Hayah Al Youm, which screened the parade and inauguration ceremony live (watch, runtime: 3:27:46). Amr Adib interviewed Hawass, who told the El Hekaya host that the museum is designed to narrate the history of the Egytian civilization and will display the mummies as the main “protagonists'' of the story (watch, runtime 2:36). Ala Mas’ouleety’s Ahmed Moussa featured an interview with El Anany (watch, runtime 6:20).

The event, under the #موكب_المومياوات_الملكية hashtag, was trending number one on Twitter, Ala Mas’ouleety’s Ahmed Moussa said (watch, runtime 8:08), and claimed that 1 bn people were following the live stream of the parade.