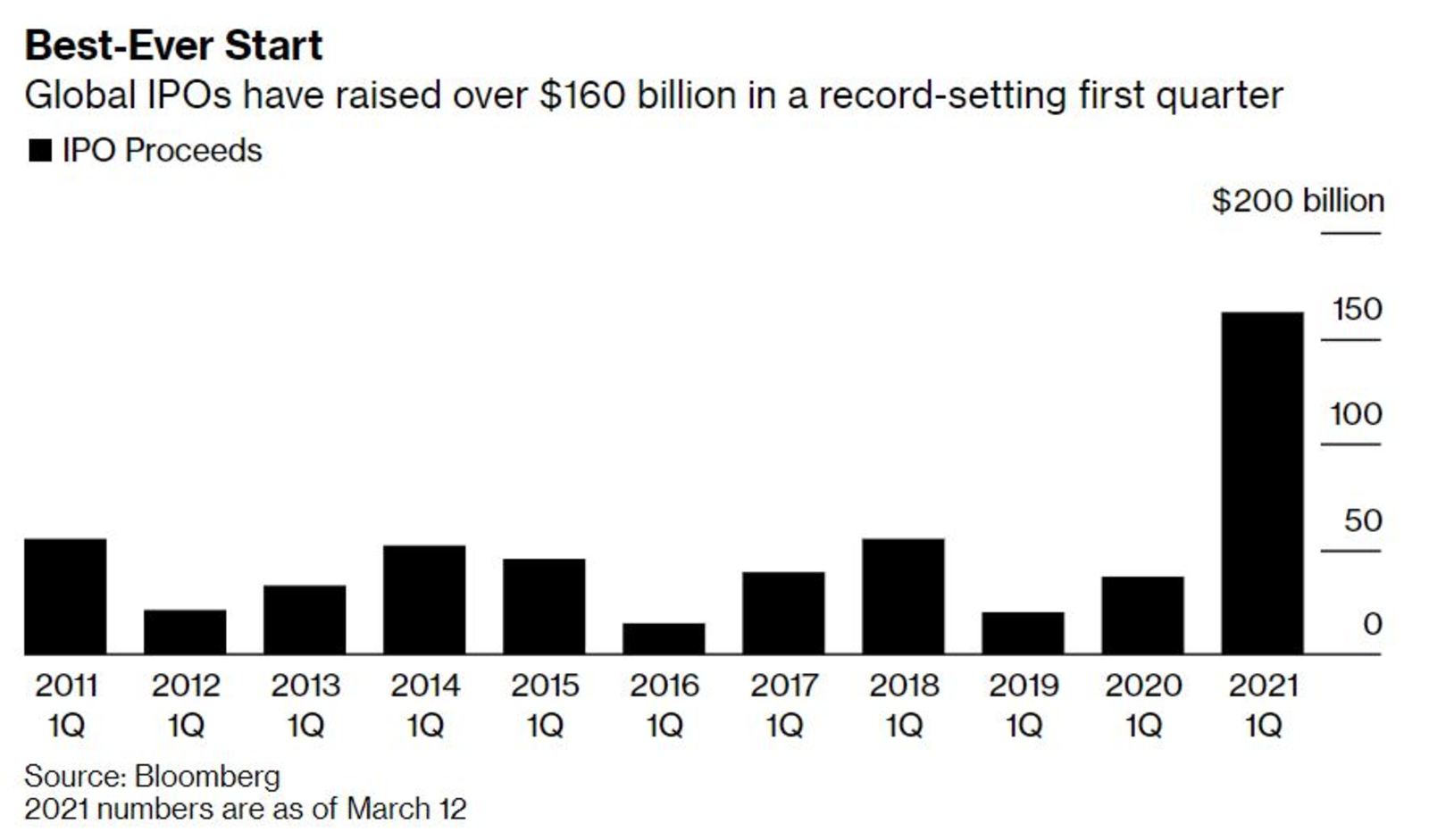 Global IPO activity had its best first quarter in history, with proceeds raised throughout the first three months of 2021 more than 6x what was raised during 1Q2020. New listings so far into the year made a whopping USD 220 bn, compared to just USD 37 bn in 1Q2020. Vaccine optimism, low interest rates in developed countries, and new stimulus led to over 600 new issuances, the most ever at such an early point of a year, says Bloomberg. While capital generation is going through what could be its strongest point in history, the special purpose acquisition companies (SPACs) that had fueled the boom are coming under increasing regulatory scrutiny, and borrowing costs are continuing to rise amid record US treasury yields.

Businesses are “recognizing the power of public markets,” and the efficiency of raising capital through IPOs, NYSE Euronext President Stacey Cunningham told Bloomberg (watch, runtime: 9:39), with companies rushing to go public in past months to take advantage of high investor demand and record equity valuations. Europe is also starting to emerge from a two-year IPO lull, with Vodafone Group’s Vantage Towers raising EUR 2.3 bn in its listing on the Frankfurt stock exchange last month.

But could the SPAC bubble pop? The fact that over half of the proceeds raised in the IPO market so far into the year was through SPACs that have no actual business except to raise money for future acquisitions is also fueling worries of a potential equity bubble. While SPACs are raising more and more, 75% of those tallied by Bloomberg had not yet announced a target, and would have to return the money raised if they do not manage an acquisition within the two year deadline. If they do successfully acquire a company, that could cut back on potential IPOs in the future, with each acquisition a foregone IPO in the making.

Regulators are concerned that the SPAC frenzy could end badly, with the US securities and exchange commission demanding information from a number of Wall Street banks in recent days about their underwriting activities in the SPAC market and how they’re managing risk. Short sellers are also getting in on what is increasingly looking like a bear market, with the value of short positions taken against SPAC shares tripling to USD 2.7 bn since the start of the year.

And cross-border IPOs could hold other hidden risks: The China-led boom in cross-border activity, which is driven by more and more foreign companies looking to the US in search of higher valuations and experienced investors comes with its own set of dangers, Brooke Masters writes in an op-ed for the Financial Times. Nearly 40% of IPOs in the US this year weren’t by American companies, the highest ratio in almost two decades, Refinitiv data shows. US-based investors find those listings appealing as they offer a chance to tap into growing overseas markets through their domestic exchange. But these investments can be riskier, as non-US companies are subject to regulatory changes in their home countries that are harder to anticipate, and could have corporate structures that restrict minority rights.

RLX technology is a shining example: Last week, China’s largest manufacturer of e-cigarettes, NYSE-listed RLX Technology, saw its share price tumble after reports emerged that Beijing was looking at tightening vaping regulations. This was despite the company having seen its stock double on its IPO day earlier this year. Stocks of other Chinese companies were also broadly hit after announcements that the Biden administration would move ahead with Trump-era plans to delist China-based firms from the US due to an alleged lack of financial transparency.

Further volatility is expected down the road: Investors are anxious about a shift away from tech and stay-at-home stocks that benefited most from lockdowns. Rising bond yields could also draw investors away from the stock market. “Demand for IPOs remains high, although as yields rise it is possible that some of the lofty valuations may need to be revisited,” Lewis Grant, a senior portfolio manager at the global arm of Federated Hermes, said. An index that tracks SPAC listings dropped 17% from a February high, suggesting that the curve of the main driver of the IPO boom won’t be climbing upwards much longer.