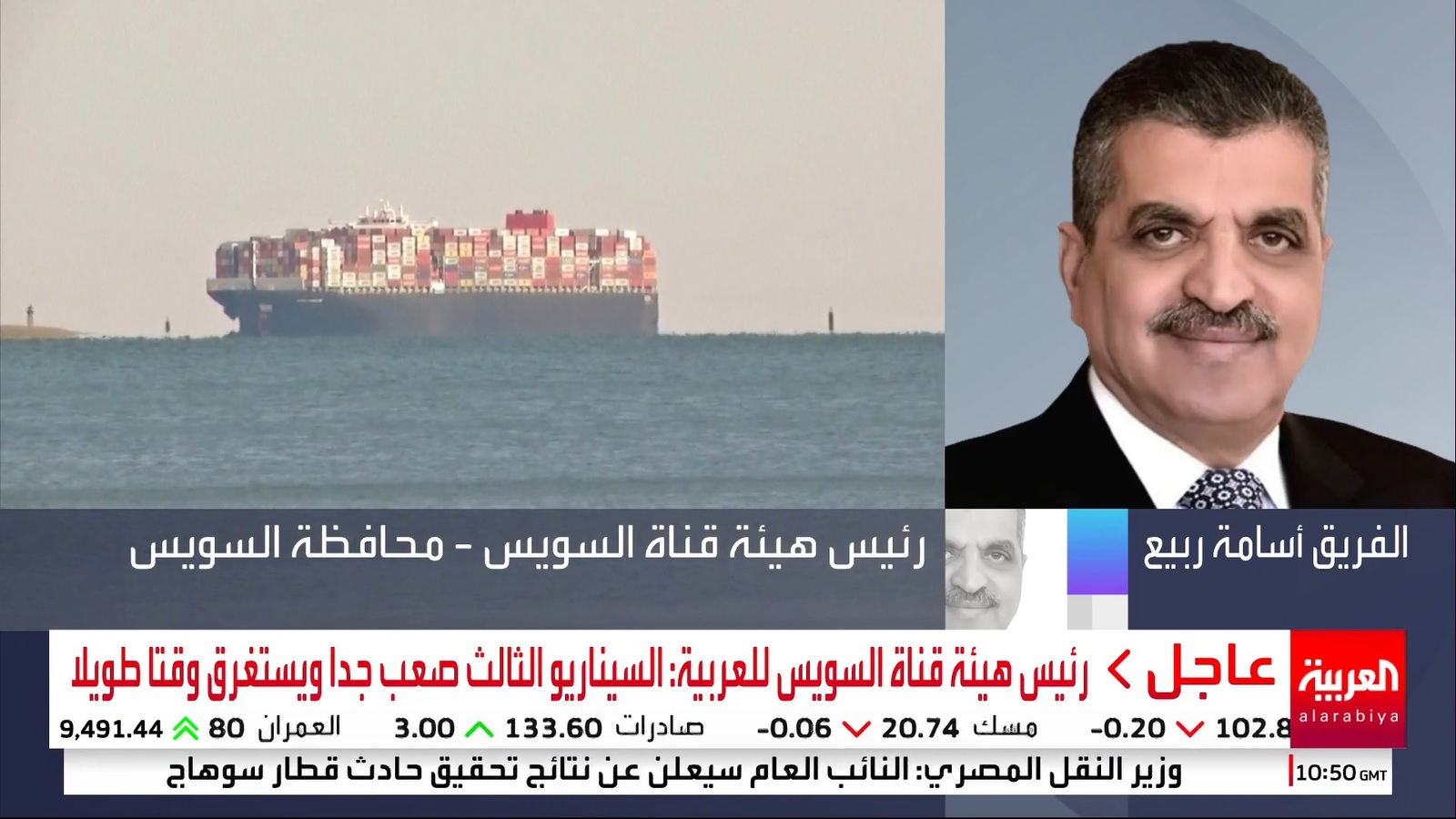 We’re entering the sixth day of work to re-float the Ever Given. Additional tug boats are arriving at the Suez Canal this morning to assist in dislodging the mega-vessel, after the Dutch-flagged Alp Guard arrived yesterday night on site as dredgers continue to remove sand from underneath the ship and mud caked to its port side, Al Shorouk reports. Another tug boat, Italy’s Carlo Magno, was also expected to arrive overnight, Kelma Akhira’s Lamees El Hadidi said (watch, runtime: 3:00). The two additional boats — which have a stronger bollard pull than other tug boats currently available — will likely be used on the stern of the ship, while the others will pull the bow, former Suez Canal Authority (SCA) board member Wael Kaddour told Lamees (watch, runtime: 10:58)

The SCA is still pushing ahead with dredging work around the bow of the Ever Given and has so far reached a depth of 18 meters to facilitate efforts to re-float the wedged ship, SCA boss Osama Rabie said in a statement.

Could the situation be cleared up by today? Presidential advisor for canal projects (and former SCA chief) Mohab Mamish thinks so, telling El Hekaya’s Amr Adib last night that authorities are optimistic that the ship will be dislodged today as dredging work continues (watch, runtime: 28:36).

If all else fails, we’ll move to the last resort of offloading some containers — but there’s a limit on how much can be done there, and how fast. A maximum of 20 containers can be unloaded per hour, and authorities would have to figure out some logistical issues, including where to take the offloaded containers since there are no ports near the vessel, former authority head Mahfouz Taha said, according to Al Mal. With the cranes currently available at the canal, this process could take some 10 days, Kaddour estimates, at which point he suggests more shipping lines will reroute to the Cape of Good Hope. President Abdel Fattah El Sisi had ordered authorities yesterday to begin preparations to offload some of the containers on the ship, and ship owner Shoei Kisen had proposed the same course of action over the weekend.

Russia and Germany are the latest to offer their help: Moscow is willing to provide “any possible assistance” to re-float the Ever Given, Russian Ambassador to Cairo Georgy Borisenko told Russian state-run news agency RIA Novosti yesterday. Germany’s Ambassador to Egypt Cyril Nunn said Berlin is also ready to step in if asked. The US and Turkey also offered a helping hand over the weekend, saying they are prepared to dispatch special equipment and vessels.

Annual trade growth could drop 0.2 to 0.4 percentage points with every week the canal remains blocked, German ins. giant Allianz said, according to the Wall Street Journal. And each day is costing Egypt around USD 14 mn in foregone revenues from ships passing through the canal, Rabie said earlier this week.

The stranded vessel has been blocking the canal since Tuesday and salvage teams had been working to dislodge it with dredgers and tugboats. There are now more than 450 vessels waiting to move through the Canal, including 25 oil tankers. And there are more scheduled to arrive over the next few hours, Mamish told Al Arabiya yesterday night (watch, runtime: 8:13).

As some ships continue to pour into the canal, others are joining the growing list of those taking the long way around: Two dozen more ships are now going around the Cape of Good Hope, including six Hapag-Lloyd vessels and 15 others from Maersk Global.

The SCA wants to make it worthwhile for the ships sticking it out: Vessels waiting for the Ever Given to be refloated could be compensated for the delay through further haircuts on crossing fees (beyond those the SCA already provides), as well as through other incentives that haven’t yet been specified, Rabie said.

Satellite footage showing the Ever Given’s journey before it got stuck made the rounds on last night’s talk shows, with Masaa DMC’s Eman El Hosary among those taking note. Initial reports and analysis of its movement indicate the ship was “swinging” in the canal, El Hosary said (watch, runtime: 14:23). Al Hayah Al Youm’s Lobna Assal also had coverage (watch, runtime: 2:28).

Do you think you could’ve done a better job of steering the ship? This game, courtesy of CNN, will give you the daily recommended serving of humble pie.