Will the Ever Given ever move? 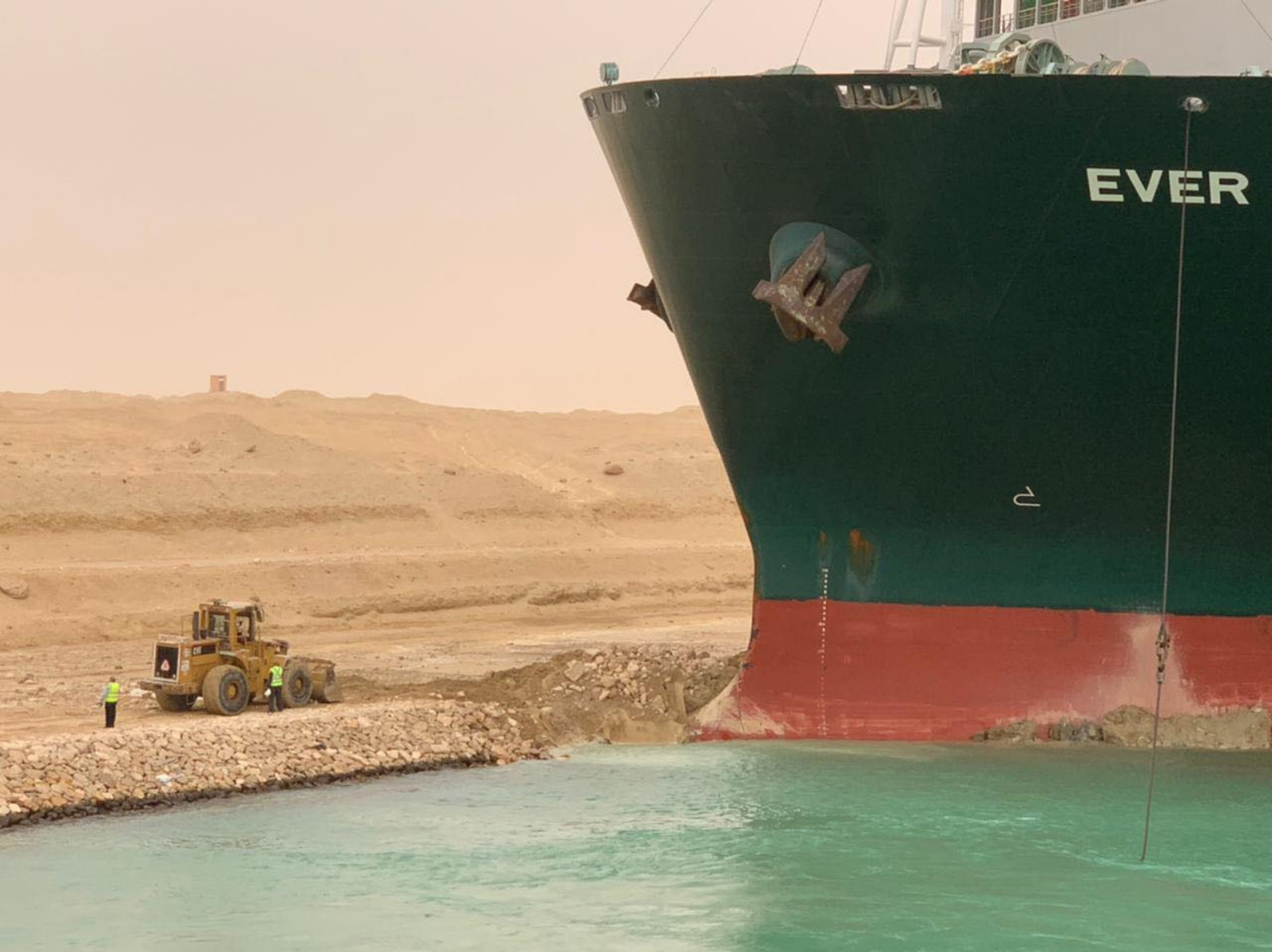 Efforts to dislodge the 400-meter-long mega vessel wedged across the Suez Canal that is blocking all marine traffic will resume this morning after tugboats failed yesterday to refloat the ship, Bloomberg reports, citing a Suez Canal Authority (SCA) source. Shipping activity remains at a standstill at the critical global trade artery that connects the Mediterranean and the Red Sea. The rough size of a skyscraper (on its side), the Ever Given is one of the largest cargo ships in the world, the AP reports.

An eight-person team from Dutch marine response firm SMIT Salvage has arrived to help dislodge the 224k-tonne ship entrenched in the Canal’s wall, Bloomberg reported separately. The salvors may have to lighten the weight of the ship to re-float and tow it from the bank by removing the ballast water that helps keep ships steady at sea, a spokesperson for SMIT’s parent company told the business information service. In a worst-case scenario, they may have to unload some of the containers onboard the vessel.

Who was sailing the MV Ever Given? Not Egypt’s first woman captain, Marwa Elselehdar, who denied rumors that she was on the bridge of the Ever Given, telling Al Hayah Al Youm’s Mohamed Sherdy last night that she wasn’t even on board the vessel (watch, runtime: 60:33). Elselehdar explained that difficult weather conditions including visibility-reducing fog — not shoddy sailing — was likely the main cause of the accident.

Almost 185 vessels were at anchor waiting to transit the canal as of yesterday morning, which is when data on the line-up was last made available. The line-up included 40 bulk carriers hauling commodities ranging from crops to dry goods such as cement, in addition to eight ships carrying live animals and a water tanker. There were also 17 oil tankers carrying nearly 8.8 mn barrels of liquified natural gas, Bloomberg reported, citing figures from research firm Kpler.

Shipping companies are still mulling the possibility of re-routing cargoes around the Horn of Africa, unnamed shipping sources told Reuters. The situation is made all the more time-sensitive due to the sheer volume of cargo that passes through: At least 12% of global trade goes through the canal. “Even a two-day delay would further add to the supply chain disruption slowing the delivery of cargo to businesses across the UK and Europe,” Greg Knowler, editor at JOC Group, tells Bloomberg.

What the hold-up means for global trade: If the situation is cleared up within a day or two, global shipping won’t be hit too hard, at top editor of industry stalwart Lloyd’s List Maritime Intelligence tells Bloomberg. However, a lengthy delay could further stretch supply chains that have already been disrupted by covid-19. Another major risk is waterways getting more congested and creating choke points as more and more ships transit maritime routes along the Suez, Panama Canal, the Strait of Hormuz and Southeast Asia’s Malacca Strait.

Vessels facing delays could be getting compensation from the Suez Canal Authority, Authority boss Osama Rabie said, according to Al Shorouk. On the flipside, the SCA could claim mns of USD of ins. payments from the ship’s owner, Japanese firm Shoei Kisen KK, for disrupting traffic in the canal and causing revenue losses, even if the ship refloats soon, Reuters reported, citing unnamed industry sources. LNG producer Qatargas could see delays in its loading schedule in early April if marine traffic at the Suez Canal remains on hold.

The story is still getting plenty of digital ink in the foreign press this morning. It’s the lead story on the digital front page of the Financial Times, Reuters, Bloomberg and CNBC. Sky News giving a play-by-play, while the Wall Street Journal’s Jared Malsin takes a trip down memory lane to emphasize the Canal’s symbolic importance to Egypt. Egypt’s talking heads were also all over the story, with everyone from Ala Mas’ouleety’s Ahmed Moussa (watch, runtime: 32:50) to Al Hayah Al Youm’s Mohamed Sherdy — who incorrectly claimed that tug boats were able to unlodge the vessel and that traffic has resumed as normal in the canal (watch, runtime: 10:49).

Background: The MV Ever Given chartered by Taiwan’s Evergreen was en route Tuesday morning from China to Rotterdam when high winds and a dust storm made the crew lose control of the ship that shortly got wedged sideways across the Suez Canal.