Heavy decision weighing on the CBE next week 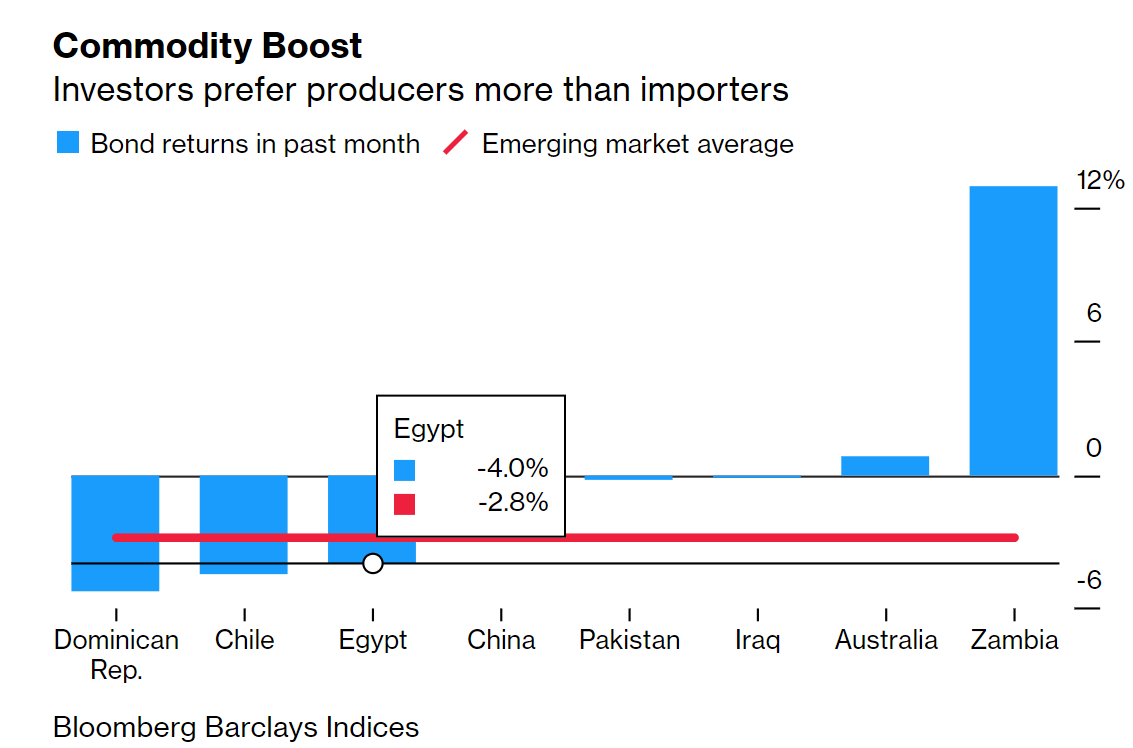 Bloomberg thinks Egypt could be among the biggest losers from a commodities supercycle. “As the world’s biggest buyer of wheat and a net oil importer, Egypt suffers badly whenever commodity prices pick up,” writes Paul Wallace. Paying more for key imports puts pressure on the EGP and turbo-charges inflation.

But does the argument hold water? Bloomberg’s basic premise is that net importers will suffer massive inflationary risk, while net exporters (Russia, KSA) will be sitting pretty. But our starting point isn’t horrible at all: Inflation has been stable — annual urban inflation rose marginally to 4.5% in February from 4.3% in January — and foreign investors are still purchasing local bonds. Almost all analysts we’ve spoken with this week tell us that, yes, inflation is likely to increase if the commodities boom continues. Arqaam Capital sees inflation at 6-7% through 2021, EFG Hermes is forecasting 6%, while Pharos is penciling in a sustained rise in the headline rate averaging 7% until the fourth quarter, when it might begin to back off.

But we’re also starting from a low point in consumer demand. Metals factories, for instance, are at best operating at 50-60% capacity, officials told us this week, so the impact of rising global metals prices has been muted.

The risk could push the government to move harder on hedging — particularly with wheat. The government is currently considering hedging against rising wheat prices. As the world’s biggest importer of wheat, Egypt’s budget is heavily exposed to the ongoing rally that has seen wheat prices increase more than 40% from lows witnessed in March to USD 207 per tonne on 1 March. Traders will be eyeing state grain buyer GASC’s Wednesday’s tender, where it will look to buy 55-60k mn tonnes of wheat for delivery in mid-April, global commodities tracker Agricensus reports (paywall)

How should the CBE react? The central bank’s Monetary Policy Committee will meet on Thursday, 18 March, to decide on interest rates. Most analysts we spoke with this week feel that the CBE will leave interest rates on hold in anticipation of a rise in inflation. “While inflation numbers support a 25-50 bps cut in rates, the rise in US Treasury yields and the risk for EM portfolio exits might prompt the MPC to leave rates unchanged,” Pharos’ head of research Radwa El Swaify said.

So far, we don’t have to worry about an exodus: Foreign holdings of Egyptian debt recovered to exceed their pre-covid level, rising to USD 29 bn at the end of last month. Real rates on EGP bonds — or the yield adjusted for inflation — remain among the highest in the world, Pharos’ Radwa El Swaify told us, adding that “we’re relatively immune” to higher treasury yields. READ MORE on the impact of rising US bond yields on Egypt here.

Even managers shedding EM debt are holding on to Egypt, apparently. Loomis’ Emerging Markets Debt Blended Total Return fund, with USD 296.6 mn assets under management, has been selling local-currency notes from Russia and Indonesia. But it has retained its holdings of Egyptian debt among other positions, Bloomberg reports.

But even now, US yields appear to be stabilizing after a US Labor Department report out today said the consumer price index rose 0.4% in February, in line with expectations, after a 0.3% increase in January. US benchmark yields settled at around 1.5% after shooting to a one-year high above 1.6% last week, Reuters reports.